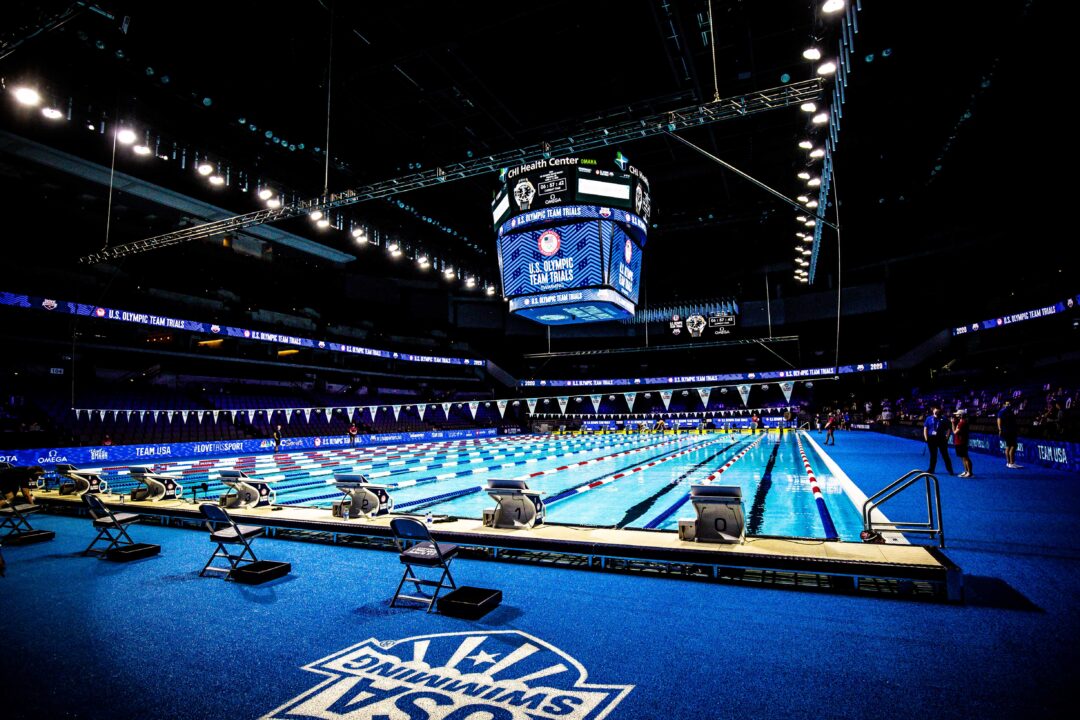 29.6% of times were faster than entry times at the 2020 U.S. Olympic Trials Wave II while in 2016 this number was 26.1% for the top 40 seeds in each event. Archive photo via Jack Spitser/Spitser Photography

A pandemic and an Olympic postponement separated the 2016 U.S. Olympic Trials and 2020 U.S. Olympic Trials. Surprisingly, they did not have a significant negative impact on the amount of times that were faster than seed times posted at the 2020 Trials in comparison to in 2016.

Thanks to Barry Revzin for crunching the numbers on this and to SwimSwam photographer Jack Spitser for pitching this idea.

The 2020 U.S. Olympic Trials were unique in that there were two “Waves” of racing that were separated by qualifying times. This was to limit the number of athletes competing at the same time to promote COVID-19 health and safety protocols.

Wave I had slower qualifying times than Wave II and was contested only as prelims and finals.

Wave II was the top 40 swimmers in each event, under the qualifying standard. It took place at the same venue as Wave I, CHI Health Center in Omaha, the following week. Wave II had the typical Olympic Trials setup of prelims, semifinals, and finals.

The percentage of times faster than seed times was higher on the men’s side for both cycles, most significantly with 2020 Wave II men cracking 30 percent. Note that seed times do not always mean lifetime best times.

This comparison is interesting because multiple factors made 2020 an abnormal Olympic Trials year. Besides the fact the meet was postponed by a year due to the coronavirus pandemic, health safety protocol limited both training and competition opportunities for months.

And surprisingly, swimmers still dropped an average of 29.6% of times faster than their seed times at Wave II.

At Wave I, however, only 18.3% of the swims were faster than the swimmers’ entry times. This may seem low, but if you compare it to the 2016 U.S. Olympic Trials as a whole it only trails their percentage of beating seed times by 2.6 percent:

Percentage of Times Faster Than Seed Times at 2020 U.S. Olympic Trials Wave I

What does this information tell us?

On the other hand, Regan Smith won the 100 back final with a 58.35, about .7 faster than the time that won Olivia Smoliga gold in 2016. A deeper look into the results would have to be done in order to make any assertions about the speed of 2016 Trials versus 2020 Trials.

This is especially amazing considering there were no 2020 trials 🙂

I wonder if the pandemic and the two waves cut down on tourist swimmers, who likely wouldn’t go best times. By tourist swimmers I mean swimmers who have stopped training seriously but still attend trials to participate and enjoy the meet atmosphere. The extra year makes it harder to hold on on little training and unless they were Wave II, they wouldn’t get the same Olympic Trials atmosphere/experience as they would have in 2016. I know this analysis was only for top 40 swimmers, but I wonder if the trend continued overall.

So it basically shows women were the same as 2016 but the men were more likely to drop times?

Is there a breakdown by event? Would be curious to see amount of best times in sprint vs distance events.

Great to have the data. Sure defeats story lines and comments that were aplenty.

Could this also be explained by the lack of taper meets last year? Swimmers had fewer chances to go fast times during the qualifying period.

That has seemed to be the case around the world. Some young swimmers who faced limited disruption are essentially putting up 2yrs worth of work and physical development now, hence some of the huge drops (Popovici, Huske & Curzan etc).

That was my first thought.