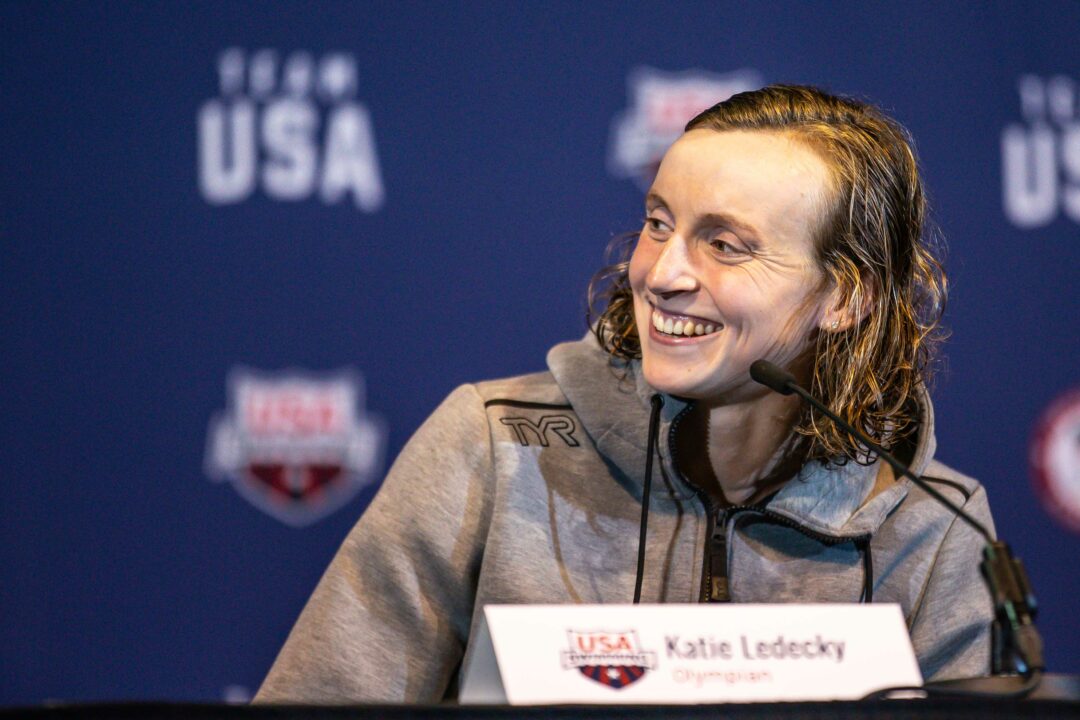 Ledecky easily won the 800 free in a time of 8:14.62, a time that falls just shy of the top-25 swims in history, most of which are held by Ledecky Current photo via Jack Spitser/Spitser Photography

It was a tale of two races in the women’s 800 free: Katie Ledecky versus the clock, and then the rest of the field battling for second.

Ledecky asserted herself early, taking off from the gun and running away with her fourth victory of the week in a time of 8:14.62, just under a second off her season-best of 8:13.64 set in March. The time for Ledecky, 24, falls just shy of the top-25 swims in history.

In an exciting race for the second spot, Bella Sims, Erica Sullivan and Haley Anderson all held the position at one point over the first 400 meters. Thing slowly began to separate, on the back-half, with 15-year-old Katie Grimes gradually moving through the field, turning third behind Ledecky and Anderson at the 700.

Grimes becomes the third Sandpipers of Nevada female swimmer to qualify for the team this week, joining Sims (800 free relay) and Sullivan (1500 free). Grimes also smashed her previous best of 8:31.73 set in the prelims, and now ranks third all-time among 15-16s, trailing only Ledecky and Janet Evans.

Sullivan fell down to sixth in 8:24.02, but still chopped two seconds off her lifetime best.

Let me make a definite prediction. Titmus beats Ledecky at 200. Ledecky wins 800 as well as 1500. In the three shorter distances, the two are percentagewise closest in the 400.

I think Katie grimes will beat titmus in the 800 her improvement curve is insane! She dropped over 16 seconds from her pb at trials! If she drops even half that at Olympics she go 8:12 is see Katie “squared ” going 1-2 in the 800

I found this video tonight, an interview with Titmus from 2019. After watching the interview I have less belief that Titmus can defeat Ledecky at 800. Titmus concedes the 800 is her least favorite and she has trouble with the strategy. No kidding. It’s been obvious for years. Titmus says she tends to lose concentration during a long race and in particular she has no idea what she is doing during the 5th and 6th hundred. None of that bothered me. But then Titmus says she wants to get below 8:15 level because she thinks that’s what it will take to medal in Tokyo. Medal. She says nothing about defeating Ledecky. Likewise she swam the 800 final later in 2019… Read more »

I don’t really think an interview from two years ago is relevant to her current attitude. I also think Ledecky will win the 800 but it’s because of performance, not because of an old interview.

I wouldn’t put your house on it.

I would put everything on Ledecky winning the 800. She had a “horrible” swim at trials by her standards and still was faster than Titmus. She also won the 800 at 2019 worlds while not feeling well.

Katie’s had a rough go at some of her tapered meets over the past few years, but it’s not from lack of work or effort. Here’s to hoping that she meets her goals and has a successful experience in Tokyo.

Katie Ledecky was ill at the 2019 FINA World Aquatics Championships.

Why would Katie Ledecky taper for the U.S. Olympic Team Trials when Katie Ledecky posted the fastest times in the W 200 FR, W 400 FR, W 800 FR, W 1500 FR of any domestic swimmer in season during calendar year 2021? As a matter of fact, the aforementioned times posted in season during calendar year 2021 are faster than the personal best times of any active domestic swimmer not named Allison Schmitt (whose personal best time in the women’s 200 meter freestyle was dated at the 2012 Summer Olympics).

Have we ever considered the idea that Ledecky’s ‘sort of rest’ (per her press conference before the meet) perhaps put her in an awkward place to race physically? And some more training with legitimate rest may set her up for more success? Seems like brief rest (Ledecky in season times) or full rest (2016 &17) might work best for her? She has consistently said she’s been training her best ever. There’s no reason for all these folks to doubt her just yet.

funny, you said the exact same thing about huske and curzan when they posted great in season free times, which didnt end up translating to good trials results in those events at all

yes really. i specified freestyle events, where both their best times in the 100 (done this season btw) were fast enough to win trials, and they both miss the 100 final. curzan’s 50 time would also have won trials by .1, yet she didnt qualify in that event either. yet your counterpoint is resorting to fly times, which i said nothing about. but I’ll play along. curzan supposedly didnt taper for that random meet where she went 56.2, yet she was slower at trials which is hailed as the hardest swim meet in the world. and I’d argue that one of a nation’s top freestylers (who goes a pair of 55 flys in the same meet) missing a weak 100… Read more »

That’s what I’m saying but she didn’t taper and also didn’t have a good trials hence her “sub-par” times.

She clearly did taper otherwise she wouldn’t have dropped in all of her events. She won’t go much faster at the Olympics. Ledecky on the other hand has the capability to go the times I stated. Just watch

Why would she taper, she was well above any other possible qualifier.

Your predicted times are outrageous. Possibly the worst takes I’ve ever seen on here.

Just watch Ledecky is gonna dominate at the Olympics

I don’t know why everyone is disliking. I said if she is on these times will happen. I’m not saying she will be on or at her best. I’m saying this is what she is capable of if she performs well

It’s probably because there is no evidence to support your predictions at all. She hasn’t been close to her Rio swims ever again and you predict she’ll beat them all based on nothing. Yes it’s possible she will, but your predictions make no sense based on the evidence.

I expect them to go 2 a piece and both swim really well, but I don’t expect them… Read more »

That is my prediction too, but nothing is for certain. The safest medal is the 1500 because it doesn’t rely on having a good start. While the 50 can literally be decided based on who has the best start (which can involve a little luck), it’s extremely unlikely to see a massive upset in the 1500 barring the favourite being sick or injured.

Katie Ledecky can always scratch the women’s 200 meter freestyle as was the case at the 2013 FINA World Aquatics Championships.

What’s the correlation there? One Australian choked in Rio and therefore all Australians will choke at the Olympics always? It’s strange how obsessed some people are with Cate Campbell and use her to justify any prediction they have lol.

Campbell choked, McEvoy choked, but Chalmers won anyway. Who else, Seebohm & C2 were both injured & Larkin was beaten by a better swimmer.

I know that. I’ve predicted Katie will win it but it will be close. Ariarne swam less than second slower than Katie did in trials. I would call that “close” in an 800m race even if I think it’s relatively safe for Katie. I don’t understand your point?

Katie Ledecky was not tapered at the 2021 U.S. Olympic Team Trials.

See Sub13, he is expecting or hoping, every Aussie, well especially Titmus, McKeown & Mckeon all choke like Campbell did in RIO.

If one of the American favourites loses i hope that everyone else will have a bit more class than the Americans instead of bringing it up constantly when it’s not relevant.

Don’t the Pandemic & the OTS.

2. “Yeah well you didn’t choke but we still got more medals”.

How are the Aussies results at the last Olympics not relevant in a discussion about the upcoming Olympics?

How is one person’s performance in one race relevant to a different person in a different race at their first Olympics? Literally any Aussie who has a good time is met with “BuT cAtE cAmPbElL”.

It’s literally like me saying “Oh Katie lost the 400 at worlds and therefore Dressel is going to lose 100 fly”. It’s so stupid and it’s literally the only thing Americans on here have to say about any Aussie swimmer. As if all of the swimmers of a given country have the same brain and same body.

Here’s a tip: NO ONE HAS F***ING FORGOTTEN WHAT HAPPENED TO CATE CAMPBELL IN RIO. IF YOU FIND YOURSELF WANTING TO MENTION IT, IT’S NOT NECESSARY BECAUSE WE… Read more »

Not as big of a choke job as Leisel Jones at the 2012 London Olympics.

How can you possibly say she ‘choked’. This was her 4th Olympics – Gold, Silver and Bronze at the previous three and she was in no way the ‘favourite’ for this event in London. This was her last Olympics and she was super happy with the fifth placing. Still went home with a silver medal from the relay. A very successful Olympic career overall. Stop talking crap.

Jones’ Olympic window had closed by 2010 and in London she basically swam to what she then was, finals level rather than medal standard. She may’ve medalled at 2011 Worlds but her times were well off her prime.

Had SKHM stated Jones choked in Athens, THEN they’d have hit a bulls-eye but …..

Titmus’s best time of 8.15 was set at the Australian trials a few weeks ago. The key statistic there though is that she negative split her race. This is partly because she tends to drift in the middle sections of the race and partly because she’s inexperienced at pacing fast 800s.

Titmus took her trials swim out in 4.08 (in comparison Ledecky -swimming more conventionally- was 4.03 at midpoint at trials). 4.08 is dawdling for someone who went 3.56 a few days earlier.

This right here is the correct take.

Ledecky was not herself at trials. She swam slower in the 400 than she has been in season. We can’t doubt just because trials performance was “sub-par”

Just to clarify: in your mind, doubting every Australian swimmer because of a Cate Campbell race 5 years ago makes sense. However, doubting Ledecky based on actual recent results doesn’t make sense.

Lmao I didn’t say anything about Australian swimmers. I am only talking about Ledecky and her sub-par performances at trials. She was probably a little rested but the rest she got clearly didn’t really help her at all.

According to USA Swimming’s database, 19 times.

She’s probably hit it once or twice in practice too.