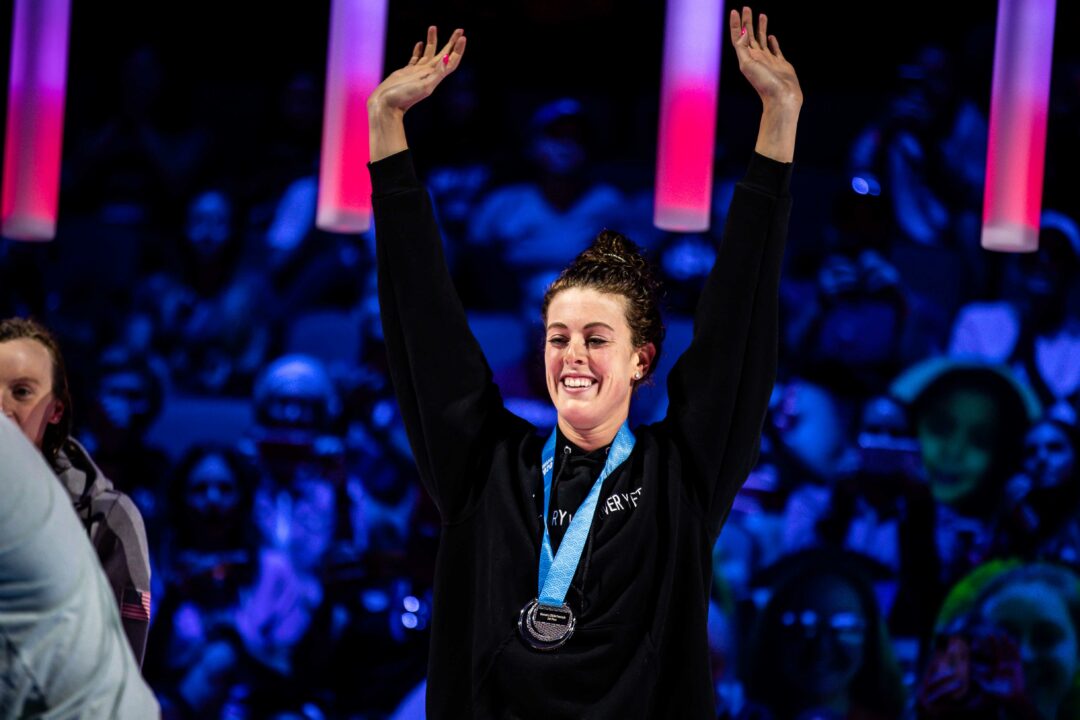 Both Schmitt and Phelps have gone public about their serious struggles with an insidious ugly monster called depression. Current photo via Jack Spitser/Spitser Photography

Mental illness is a feeling of hopelessness, that things are really bad and could never get better. It’s like being in a dark tunnel with no lights and no chance of getting out.

It may not seem like a place where superstar swimmers would ever go because they’re very successful at what they do, get praise from family, friends and the press. Every day they get their good-feeling endorphins pumping through their bodies. And people actually wish they could do what these phenoms can do in the water.

But life isn’t always what it seems. People often don’t feel as great as you would think they would.

After qualifying for the Tokyo Olympics in the 200-meter freestyle, Allison Schmitt walked across the pool deck and embraced Michael Phelps.

It wasn’t a brief hug. It was a long, emotional coming together of two human beings to console one another. The moment transcended sports and qualifying for the Olympics.

Both Schmitt and Phelps have gone public about their serious struggles with an insidious ugly monster called depression. At his lowest points in recent years, despite being the undisputed greatest swimmer of all time, Phelps has talked about not seeing a reason for living anymore.

Schmitt shared her feelings of not wanting to go to swim practice in an article in Today.com.

“When I woke up in the morning, I would look forward to going back to bed. As soon as my alarm went off, I knew that it’s time for practice. But my thoughts were, ‘Okay when can I get back into bed.”

Wanting to go back to bed the moment you open your eyes in the morning is one of the most common – and saddest – signs of depression.

A few years ago Phelps noticed Schmitt wasn’t being herself and offered to help her get help as he had for himself. She accepted that. And the two have been close friends, in a very special way, ever since.

Which is why it was so beautiful and poignant to see the two of them clench each other tight last night. Yes, it was tremendous that she had again qualified for the Olympics and has a chance to add to her pile of Olympic swimming medals.

But it was more tremendous that two friends were having a moment of true support together. Phelps was showing his special friend that he loved her and felt for her. He sympathizes and empathizes with what she’s been through.

Schmitt was accepting that love from a person who understood the sadness she’s felt at times during her life.

The Olympics always seem to bring out stories that make you feel something more than just pride in your country and hauling in medals. The Olympics give us insights into the souls of people, what’s in their hearts, how they feel, what makes them frustrated and sad and fulfilled. These stories make us cry.

Over the next several weeks and months we’re going to be watching and learning about these American swimmers, and our nation’s athletes in many other sports, pursuing lifelong aspirations to be the best at what they do. In almost every case they’ll fall short. Only one person wins the Gold Medal in any event.

But they’ll be winners – and losers – in other ways. They’ll be people like Schmitt revealing true feelings, probably hugging Phelps again after she races, win or lose, because he’s a source of comfort to her.

They’ll be athletes crying. You can already see that after Olympic Swimming Trials races. Some are finishing in third place in their events by less than one tenth of a second and that means they’re not going to Tokyo. They’ve been denied what they’ve been focused on their entire lives. It’s very much like a door being slammed shut in you face saying “no, you can’t come in here; try again in four years.”

The Olympics are harsh in this way. All that work with so miniscule a chance of reaching the zenith.

But it’s not about that, ultimately. It’s about people and friendships and togetherness and love. It’s about Michael Phelps, a troubled man at times, consoling Allison Schmitt, also battling emotional demons.

It’s about the two of them coming together and embracing, being there for each other, and knowing that’ll always be the case.

I knew A LOT of swimmers that were dealing with depression in my day. Many swam thru it, some outright quit. Either way, not many felt they could talk about it. One freind even ended up in the hospital. (He’s fine now).

Hopefully MP and AS’ stories help shine light where it used to be dark. Times are tough, but nobody goes through it alone.

Love this! Thanks for the article.

Swimming transcends the sport itself.
A lot of troubled kids take on swimming because it is relaxing and challenging and makes you feel good about yourself.

Michael is the best person alive.

This is my first time ever reading anything from this source, and I must say you did a beautiful job. You humanized this illness that many often overlook as some just don’t understand. I applaud you.

Well written, sir. I wish there were more people in this world like this, then maybe just maybe we wouldn’t have so many young kids trouble, and submitting to other means for this disease.

Awesome article…sometimes you never really know how a person is feeling!

Sorry, but that is a creepy headline…..