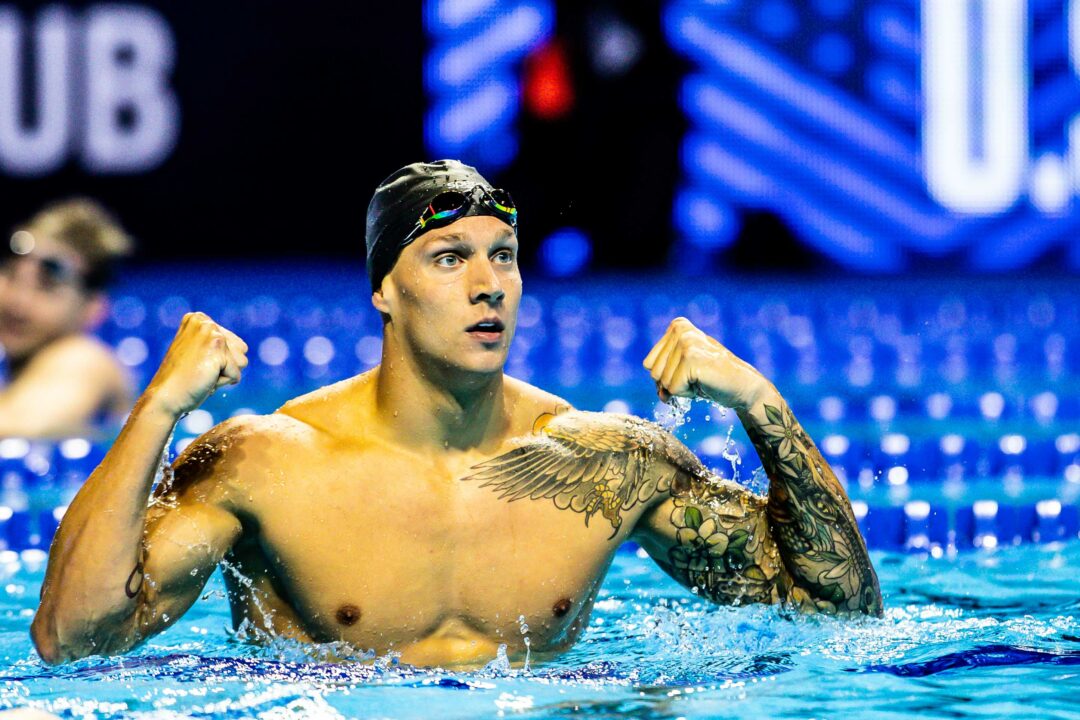 Dressel's time of 50.17 gives him six of the nine-fastest 100 fly performances of all-time. Current photo via Jack Spitser/Spitser Photography

After breaking his world record two years ago at the World Championships, Caeleb Dressel snatched away another Michael Phelps record in the men’s 100 butterfly during the sixth day of prelims at the U.S. Olympic Trials in Omaha.

Dressel demolished the field in the 100 fly heats, putting up a time of 50.17 to lower Phelps’ U.S. Open Record (the fastest swim ever on American soil) of 50.22 set at the 2009 World Championship Trials in Indianapolis.

One notable thing about that Phelps swim at the 2009 World Trials was that he set the world record—and it was his first time grabbing hold of that record since he had it for about 24 hours at the 2003 World Championships.

Phelps had gone 51.47 in the semi-finals at those ’03 Worlds in Barcelona, the fastest swim ever, and then Ian Crocker went 50.98 in the final to take both the gold and the record. Crocker lowered it two more times over the years, down to 50.40 in 2005, before Phelps finally reclaimed it in 2009.

If we look at the splits from Phelps’ and Dressel’s swims, it really punctuates their contrasting strategies (largely due to the fact that Dressel is a sprinter and Phelps primary swam 200s).

Dressel produced the sixth-fastest swim of his career and the ninth-fastest of all-time with his prelim performance, giving him six of the nine-fastest ever.

The 24-year-old also overtakes the #1 time in the world this season, moving past Hungarian Kristof Milak, who dropped a 50.18 at last month’s European Championships.

At the 2019 World Championships, Dressel broke his first long course world record in the 100 fly semi-finals, clocking 49.50 to extinguish Phelps’ world record of 49.82 set in 2009. Dressel went on to win gold in 49.66, the second-fastest swim ever and his second consecutive world title.

Looking at the men’s 100 fly field as a whole in Omaha, Dressel is essentially a lock to win at this point, qualifying more than 1.5 seconds clear of anyone else in the prelims. Michael Andrew, the only other American sub-51 this season, scratched out to focus on the 200 IM, leaving the second spot wide open. Cal’s Tom Shields and Trenton Julian tied for second this morning in 51.71.

This list includes the suit era – any chance you can also show the textile only?

I think both milak and dressel can go 49

I’m guessing a similar time tonight, within a tenth, but a 49.7 tomorrow. He looked so easy and didn’t put his head down at all down the stretch. I think the story tonight will be who goes out with Dressel, I would love to see another 50.**

He looked sheepish after he saw the time, I don’t think he thought he was going that fast

Dressel now owns the Top 6 fastest textile times in history in this event. One could safely assume he’ll have Top 8 after this week.

Shields has a shot! Sawweet.

Would have loved to see Michael Andrew swim butterfly as well