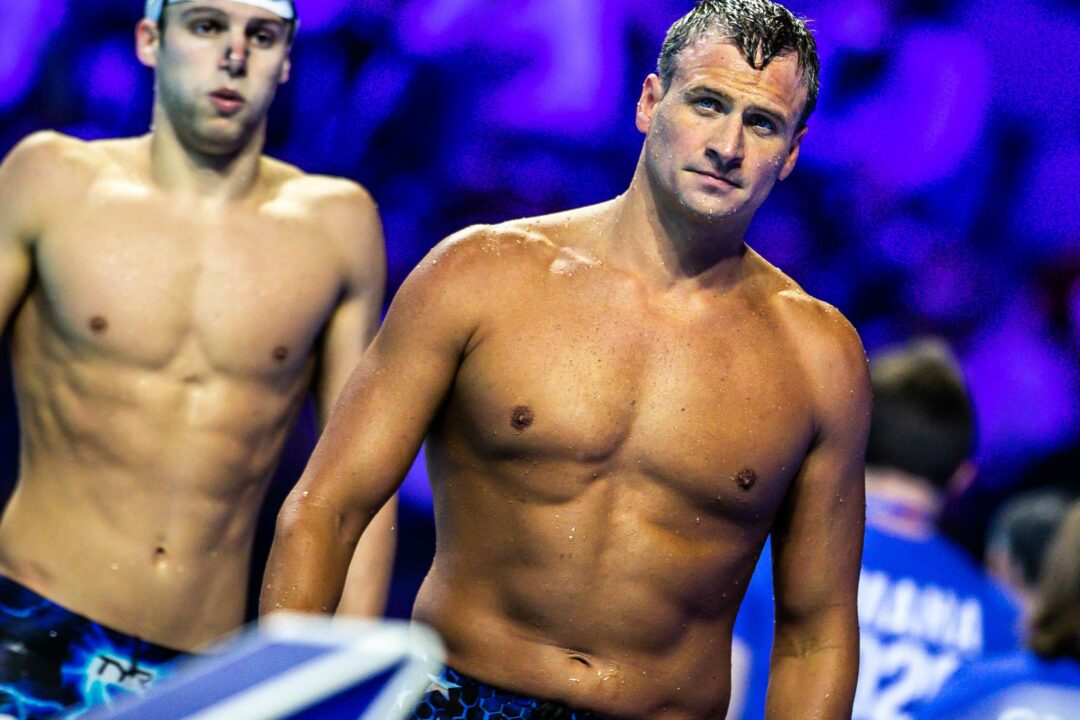 Day two of the 2021 US Olympic Trials did not fail to provide us with many surprises, one being Ryan Lochte missing the semi-finals in the 200 free. Current photo via Jack Spitser/Spitser Photography

Day two of wave II of the 2021 US Olympic Trials did not fail to provide us with many surprises, the biggest one being Ryan Lochte missing the semi-finals in the 200 freestyle.

Lochte, a 4-time Olympian, has represented the United States in the 4×200 freestyle relay at every Olympic Games he’s contested, winning 4 Olympic gold medals from the event. In 2016, Lochte swam a time of 1:46.62 to finish 4th overall in finals. Today, he was almost 3 seconds off of that time, posting a 1:49.23 to place 25th out of prelims, missing the semi-finals by over a second.

For Lochte, his performance in the 200 freestyle is a possible foreshadowing of his 200 IM later in the meet. In 2016, Lochte placed 2nd with a time of 1:56.22. However, during the Olympic Trials qualification period, he has only been 1:57.76 in the event.

Lochte later missed his heat in the 100 backstroke, opting for a declared false start.

As predicted, the field for the women’s 100 backstroke was extremely tight through prelims. However, what few people could have predicted was the fact that former world record holder Kathleen Baker was only 11th out of prelims, failing to break a minute in the event.

Baker, who has been dealing with a foot injury, had a low start and appeared to lose her kick during the closing meters of the race. Her time of 1:00.46 from this morning was almost exactly a second off of her season best of 59.45. In order to make the final, Baker will most likely have to match her season best, as 7 out of the top 8 finishers in prelims were under a minute.

NCAA Champion Dean Farris scratched the 200 freestyle event this morning to focus upon the 100 backstroke. The move was surprising for some, especially considering he is the American Record holder in the short course version of the 200 freestyle.

World record holder Lilly King did not appear too content with her performance in the 100 breaststroke prelims, even appearing to mouth some choice words after her finish.

Madden Shaking Up the 400 Free

Paige Madden had a statement swim in the 400 freestyle. After claiming 3 NCAA titles this year, Madden was expected to have a big performance at Trials. However, her swim this morning revealed she may even have more up-her-sleeve than originally anticipated.

During prelims, Madden stayed right on Katie Ledecky’s toes, finishing in 4:05.92 to move to #13 all-time in US History. Madden’s time was a massive improvement upon her previous best of 4:09.19, and she may challenge Leah Smith for the second roster spot tonight.

Lochte missing the 200 free semis isn’t a surprise. Him making the team at all would be more of a surprise. He’s 36 years old and doesn’t seem to have a post swimming career plan (as does Cody Miller). He’s also been pretty open about his financial problems.

Coaches don’t have a fountain of youth.

2
0
Reply
Anything he swims

3
0
Reply
A C
Reply to  Anything he swims

A 36-year-old swimming a season-best and by far his smartest 200 free of the season, certainly disappointing given who it is but not really a surprise IMO. Lochte should be pretty pleased with the time and the race at the end of the day. His life is fine.

Yes and no. He is a very high profile professional swimmer. Making the team means millions to him.

I’d be shocked if it meant millions to him at this stage in his career. Especially after the Rio saga. It definitely means a lot of money, but I think his days of bringing in millions are over.

They’re not guaranteed, but I don’t know if there’s ever been under a instance under currently selection criteria where it hasn’t happened. Granted, not sure we’ve ever failed to have two swimmers hit an A cut, either…

In theory, yes. The 2nd-place finishers in each event are also not guaranteed a spot on the Olympic team. But if enough swimmers qualify in multiple events, the 2nd placers and 5th/6th placers get officially added. Usually, the U.S. has plenty of multi-event swimmers, so the overall roster cap of 26 men and 26 women isn’t a factor. We wouldn’t expect it to be this year, either.

Digging into the data for some fun with numbers:

Looks like his 2nd and 4th 50s were the difference makers.

2012 being slower than 2008 can be attributed to the LZR supersuit.

Also a peak Lochte 200 free prelim would be him screwing around for the first 150, doing a monster final underwater, turning on the jets, then cruising the last 10 metres with a 4 metre glide into the finish. That is not what happened today 🙁

2
0
Reply
A C
Reply to  The Original Tim

Thx! This is really useful. His 4th 50 today really stands out as being slower, and that spells trouble for his 200IM.

5
0
Reply
bignowhere
Reply to  A C

It is interesting that his 4th 50 was so much slower, as he *looked* as though he was pulling away from the field at that point. I guess that is what happens in a slower heat.

It is also interesting that his first 50 wasn’t so different from all his other OT prelim races. When I first saw the splits, it really stood out to me how much slower his first 50 was than the top qualifiers. So I figured he screwed up his pacing. But it looks like that’s how he has always taken out a prelim 200 free.

4
0
Reply
A C
Reply to  bignowhere

Yup. I had the same reaction.

2
0
Reply
A C
Reply to  The Original Tim

1
0
Reply
A C
Reply to  The Original Tim

Shoot, maybe he didn’t under swim that first 100 and just couldn’t bring it home.

I dunno what it is this time around but Lilly King is really getting on my nerves. This brash, in-your-face side of her has been accommodated for too long

She also waited forever to get on the block If I remember correctly.

She’s the world record holder, the officials will wait for the greatest swimmer in the history of the event

I’ve never really liked her from the get-go and she always gave off that rough and loud “I’m the greatest” American stereotype.

Interesting take on King…. however, I’d like to assert that if she were a man then people would not say these things. If she were a man, rather than saying “brash, in your face” we would say “he is a fighter, a real winner, he kicks you know what”.Think GHJ. Think playing air guitar on deck at Sydney Olympics.

Everyone hated GHJ though and clowned on him when the Australians beat him.

If Lily King keeps winning most people will say that stuff. And that’s what they have been saying. If she starts losing things will get negative quickly. It’s the nature of conducting yourself in that way, you have to back it up every single time.

I immediately thought of GHJ and not liking him for the same reasons.

And you’ll have accommodate it for longer. Don’t get your undies in a twist princess.

The world is filled with all kinds of people. Maybe best to appreciate our differences.

Are people really surprised by Dean? When was the last time he put up some top tier times?

I blame Madyson Cox for the decline.