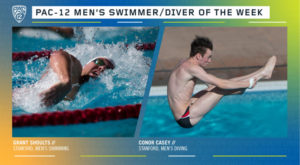 The Conference office announced Wednesday that Stanford’s Grant Shoults and Conor Casey were named Pac-12 Men’s Swimmer and Diver of the Week. 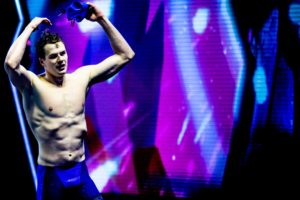 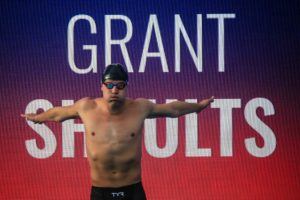 Grant Shoults on Fall Training at Stanford: “Better than I expected” (Video)

This morning, Shaine Casas churned out a 1:58.54 to dominate the 200 meter IM in long course, a lifetime best. He’ll be the man to beat tonight.

Shoults is member of the Santa Margarita Catholic High School swim team. During his junior year, he broke a 24-year-old 200 yard freestyle independent national high school record at the CIF Southern Sectionals. He dipped under the 1:35 mark for the first time in his life, touching in 1:34.54. The record was one of only two high school records that still stood from the 20th century. In 2016 he was named the Swimming World High School Swimmer of the Year.

Shoults gained his first international experience in Hawaii at the Junior Pan Pacific’s. He raced the freestyle distances from 50 to 400 meters. But his top finish came in butterfly, he placed 4th in the B Final of 200 meter butterfly in 2:03.26.

In Singapore, Shoults showed his potential on the world stage, picking up a medal in each of his three races. He set the pace for his meet during the first event of the championships, the 400 meter freestyle. Shoults got out to a quick start but was chased down the whole way by two chinese swimmers. Their efforts weren’t enough to catch Shoults and he powered to his first international medal, a gold in 3:48.91.

He continued his fine form in the 200 meter freestyle, with team USA lighting up the pool going 1-2 in the event. Shoults took silver in 1:48.42 behind teammate Maxime Rooney. The pair teamed up in the 4×200 meter freestyle relay with Shoults leading off. His split of 1:48.10 put the team on pace for a new Junior world record. The rest of the team maintained the lead to take gold in a new Junior World Record of 7.13.76.

As one of the top recruits in the nation, Shoults chose to move to Northern California to become a Stanford Cardinal under the guidance of Ted Knapp.