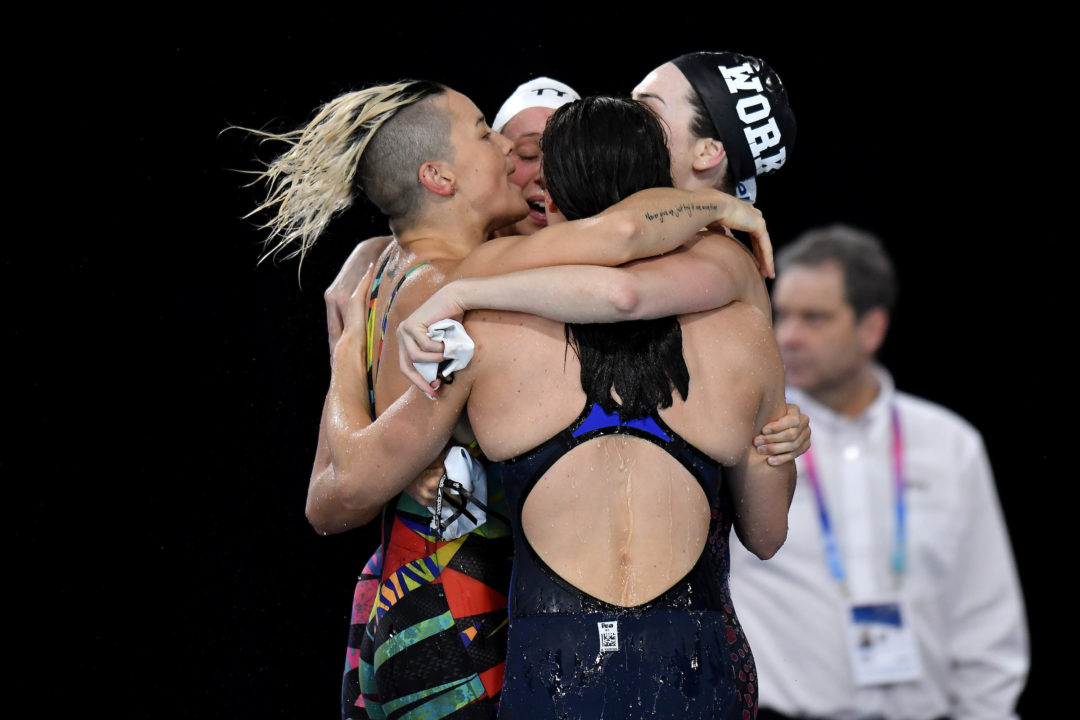 Upon the conclusion of the 2021 French Elite Swimming Championships, France has named 10 men and 5 women to their Tokyo 2020 Olympic roster. Archive photo via Andrea Staccioli / Deepbluemedia / Insidefoto0

The 2021 French Elite Swimming Championships wrapped up on Sunday, June 19 and upon the conclusion of the 6-day Olympic qualifying meet, it appears as though France will send 15 swimmers to the Tokyo Games to race individually.

This list was compiled based on the French Swimming Federation’s social media posts via Twitter and Instagram over the course of the meet but we don’t yet have a full official roster from the federation. We will update the list should any more information become available.

The roster features 4 fewer individual entrants than the 19 that France sent to the Rio 2016 Olympics and the 21 that they sent to London 2012.

The headliners here will be 2-time individual Olympic medalist Florent Manaudou who picked up 50 free gold in 2012 and silver in 2016. Joining him, up-and-coming Leon Marchand will pull triple duty in the men’s 200 IM, 400 IM, and 200 fly. Marchand swam a 4:09 in the 400 IM to break the French National Record in the event and insert himself firmly into the medal conversation.

French record holder Mehdy Metella will race the 100 fly after undergoing shoulder surgery a bit more than a year ago.

As for the women, Charlotte Bonnet will be competing in the 100 and 200 freestyles at what will be her 3rd Olympic Games with a shot at improving upon her 8th place finish in the 200 free in 2016. Joining her and competing at their 2nd-ever Olympic Games will be French record-holders Marie Wattel (50/100 free, 100 fly) and Melanie Henique (50 free).

One of the biggest names missing so far from the list is 2016 Olympian Beryl Gastaldello who just missed out on qualifying in the 50 freestyle, 100 freestyle, 100 butterfly, and 100 backstroke. While she swam under the Olympic qualifying cut in the 100 free, she didn’t hit the required top 2 finish as Marie Wattel and Charlotte Bonnet went 1-2 and will swim the event in Tokyo.

Notably, Beryl Gastaldello swam a 53.40 to win the 100 freestyle at France’s first Olympic qualifying meet back in December which was faster than Marie Wattel (53.72) and Charlotte Bonnet‘s performance both in December and recently in June.

While Gastaldello missed out on qualifying individually, she will be representing France at the Games for the 4×100 freestyle relay along with Wattel and Bonnet, as well as Anouchka Martin and Margaux Fabre who were named to the team for the relay.

Charlotte Bonnet is the sole swimmer to be named individually in the women’s 200 freestyle meaning that there is an opportunity for one of 3 nominees to the women’s 4×200 freestyle relay could get a shot at swimming the event. Assia Touati placed second to Bonnet at the 2021 French Elite Swimming Championships with a 1:59.70 which was a bit over the 1:57.28 FINA A cut but under the 2:00.80 FINA B.

Another swimmer who could potentially get an individual swim is Théo Bussiere who made the team for the men’s 4×100 medley. He will race the breaststroke leg, having won the 100 breast with a 1:00.25 which trails the 59.93 qualifying cut. Since he is making the trip to Tokyo, the selection committee reserves the right to name him to the team in the 100 breast.

More time prepare for that ISL bag.
Swimming for the IOC for free is a dying movement.

I feel sorry for Damien Joly though, he went under fina A cut 2 times during the qualification period but missed it at the trials

On the one hand you could ask if it makes sense to have just one qualification meet this year (what if he would have gotten sick and would have missed training?), on the other hand you could ask why you should trust him to peak at the olympics when he didn’t know how to time his training to peak at the qualification meet. France doesn’t really have many other athletes who could make the final, so i would have probably nominated everyone with the A standard.

200 fly/200 IM/400 IM
It sounds very Phelpsian to me.
And logically Bob Bowman will train Marchand soon.
Please Bob, take care of him and thanks in advance for helping him achieve his goals in 2024 at home.

Looks like Gastaldello has completely missed her taper. She looked tired in Chartres. Flat.
She was flying during ISL. I don’t know. She has taken the risk of swimming that long competition in SCM at 200%. And maybe she pays the price now.

She’s not really a medal shot in anything LCM (maybe 50s stroke for worlds) even at her best, so I think having an illustrious ISL career makes more sense for her. More money(??) and a bigger chance to be a headline name in the new era and venue for swimming.

Is she based in France right now or did she just flew in for the trials ?

She’s not based in France if I recall correctly, she’s licenced at the Cercle des Nageurs de Marseille but trains 100% in the US and spends most of her season there

She’s based at Texas A&M in the United States. She primarily trains with Jason Calanog.

The difference between the kiddie pool when it is all turns and underwaters and the olympic when there is more actual swimming. Some master both yeah, but not all

That doesn’t seem like a fair interpretation. She was 53.40 in the 100 free in December, which incidentally would have won US Trials. This seems more like a case of a missed taper to me.

Gastaldello was never able to translate her SCM prowess to LCM

To borrow your legendary words:

Gastaldello is good in bath tub, not so much in adult pool

That men’s 400 free relay looks like it’s in serious risk of not making the final. Only Grousset seems to be in good shape.

I am not so sure, based on individual times the US, Russia, GB, Australia, Italy, Brazil and Hungary (although they can’t afford to rest Milak/Nemeth/Szabo in prelims) are all clearly faster. The 8th spot should be between Japan and France, with Switzerland/Poland as possible spoilers.