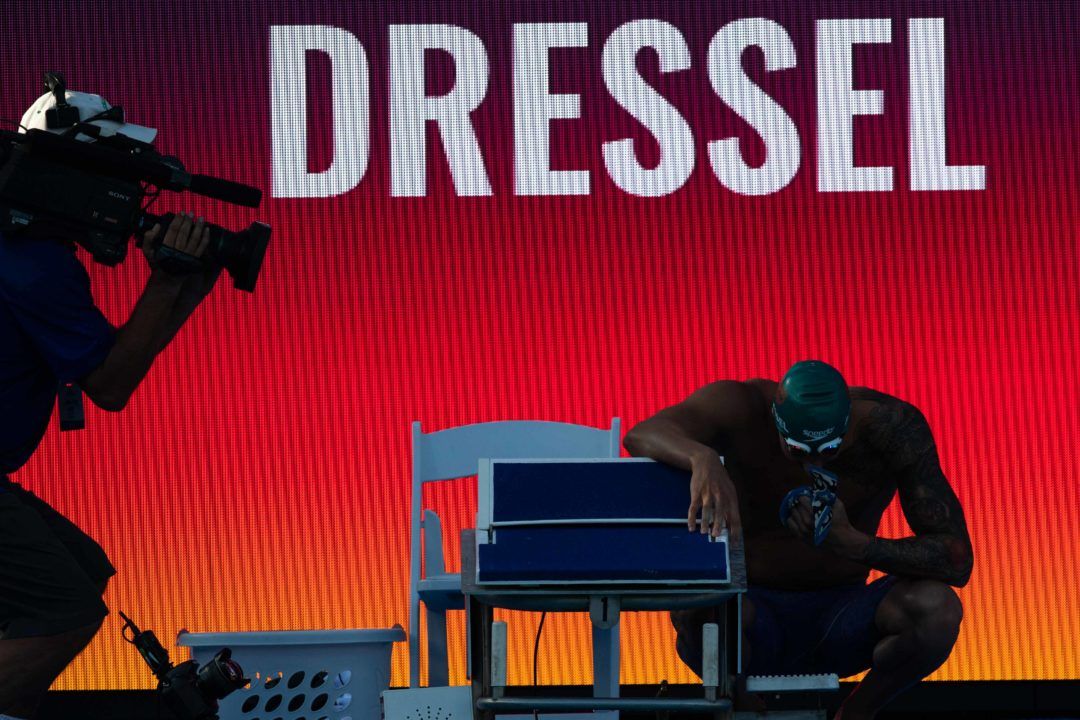 Day 2 finals of the 2018 U.S. Nationals are set to begin at 6 pm in Irvine, California. Swimmers will compete for spots on the Pan Pacs roster in the 200 free, 200 back, and 200 breast tonight. The winners of the 50 fly won’t earn a Pan Pacs qualification, but they will earn a spot for 2019 Worlds.

Olympic Allison Schmitt is making her comeback in the 200 free, but a stacked field with Melanie Margalis and Katie Ledecky could be hard to beat. Andrew Seliskar had a breakthrough swim this morning in the 200 free leads the way into finals ahead of Olympians Townley Haas and Jack Conger. The 200 back has the usual suspects: Cal-based Olympians Ryan Murphy, Jacob Pebley, and Kathleen Baker, as well as age group star Regan Smith. Olympians Lilly King and Micah Sumrall are among the women’s 200 breast finalists. Josh Prenot leads the way into finals as he seeks redemption after missing last summer’s Worlds team, with Will Licon, Nic Fink, and Kevin Cordes looming.

Katie Ledecky scorched a 55.77 going out, less than 2 tenths under World Record pace. She fell off the pace on the back half, but still won handily with the 6th fastest American performance ever in 1:54.60. Behind her, Allison Schmitt cemented her comeback with a 1:55.82 for 2nd.

After taking 2 seconds off her best this morning, Michigan’s Gabby Deloof became the 9th fastest American performer ever as she took 3rd in 1:56.55, making her move on the 3rd 50 to push ahead of Leah Smith (1:56.93).

Just out of the top 5 was Simone Manuel in 1:57.01, marking her best time by about a tenth. Manuel has already qualified for Pan Pacs after swimming the 2nd fastest American 100 free ever last night. Olympic relay champ Melanie Margalis (1:57.32) was about a half second shy of her prelims time for 6th, as was Mallory Comerford (1:58.38) for 7th. Comerford has also cemented a Pan Pacs spot with her 100 free, while Margalis is the frontrunner to qualify in the IMs later on.

Junior star Jack LeVant came up just short of the top 4, touching just a few hundredths behind his prelims time in 1:46.44. He’s still the 2nd fastest 17-18 year old American ever behind Michael Phelps. After tying for 3rd in the 200 fly last night, Texas’ Jack Conger, who swam the 200 fly at Worlds last summer, is still not a lock for Pan Pacs. He took 6th tonight in 1:47.45.

Micah Sumrall, 2012 Olympic breaststroker, is back on top. After taking a break post-Rio, she’s made her comeback in full swing, winning by over a second in 2:22.06. 2017 Worlds 200 breaststroker Bethany Galat of Texas A&M was 2nd in 2:23.32. Both women have bests in the 2:21-range, so this should be a good battle at Pan Pacs. Indiana’s  Lilly King will also be in the mix assuming she qualifies in the 100 breast, which is highly likely as she’s the World Record holder and Olympic champion. King was a 2:25.31 for 5th tonight.

Another swimmer making a comeback, Indiana postgrad Annie Lazor, cracked her lifetime best in 2:24.42 for 3rd. Lazor was an All-American at Auburn and has only continued to get better. Another collegiate standout, Emily Escobedo of UMBC, was 4th in 2:25.22.

Age group star Zoe Bartel was 5th in 2:25.22, clipping a couple of tenths off her best time. She’s now the 2nd fastest 17-18 American ever behind only Olympic champ King. Fellow World Juniors breaststroker Ella Nelson dropped another half second, breaking 2:26 for the first time with a 2:25.92 for 2nd. She’s now the 6th fastest American 15-16 year old ever.

Andrew Wilson was out like a light, under World Record pace in 1:01.08. On the 3rd 50, American Record holder Josh Prenot made his move, hitting the final turn under his own American Record pace. He fell just slightly off the pace on the final 50, touching just  a tenth behind the mark in 2:07.28 for the 2nd fastest American performance ever.

The field crept up on Wilson down the final stretch, but he still managed to hold off teammate Will Licon by a hundredth at the finish as they touched in 2:08.71 and 2:08.72 respectively. That was Licon’s fastest swim since 2016, when he put up his lifetime best 2:08.14 at Trials.

Kevin Cordes, the 2nd fastest American ever in this event, was 5th in 2:09.71, just ahead of junior star Daniel Roy, who was just 3 hundredths off his lifetime best and NAG Record. Roy won the Indianapolis Pro Swim earlier this year, breaking the 17-18 NAG in the process in 2:09.73. Before Roy first broke the Mark, Cordes owned it. Cordes still has a good chance of qualifying for Pan Pacs in the 100 breast later on. His Worlds teammate Nic Fink of Georgia hit the wall just ahead of him tonight for 4th in 2:09.24, running him down on the back half.

It was a thrilling race that came down to the touch. Short course American Record holder Kathleen Baker and age group phenom Regan Smith were the clear leaders early on. Baker was slightly faster up front, with Smith trailing by tenths. It looked like Baker had it locked down, but Smith really dug into the last 15. They wound up touching at the same time for a 2:06.43 tie. Smith’s time was a new World Junior Record, while Baker was just hundredths shy of her best. The former World Junior mark belonged to Australia’s Kaylee McKeown in 2:06.76 from 2017 Worlds. Smith and Baker are the 6th and 7th fastest Americans ever respectively.

Another 16-year-old, Isabelle Stadden, picked up a likely Pan Pacs berth as she touched 3rd in 2:08.24, chasing Lisa Bratton (2:08.37) down on the final 50. Stadden clipped her best by a little over a tenth, missing the all-time top 10 Americans list by 4 hundredths. The 10th spot on that list belongs to Bratton with her lifetime best 2:08.20.

Olivia Smoliga has made huge improvements in this event in 2018. Coming into the season, she had never broken 2:15. Tonight she put up a 2:08.58 for 5th place, narrowly missing out on a potential Pan Pacs berth, but that bodes well for her 100 back later on.

Olympians Jacob Pebley and Ryan Murphy battled mid-pool, with Pebley leading by hundredths halfway. Murphy used a huge underwater to break ahead right off the wall after the flip, building a body-length lead to win it in 1:54.15. This bodes well for Murphy, who had an off summer in Budapest. The only time he’s ever been faster was when he won the backstrokes in Rio. He was half a second shy of his lifetime best tonight.

Pebley held on for 2nd in 1:55.68, while NCAA champ Austin Katz finished 3rd in 1:56.12, knocking a few tenths off his best. He’s now within 3 tenths of the all-time top 10 Americans list. Like Katz, Clark Beach is coming off a successful first NCAA season. Beach picked up a 4th place finish in a lifetime best 1:57.41, just holding off  fellow rising sophomore Bryce Mefford (1:57.46) down the stretch as both beat their lifetime bests from prelims.

Carson Foster swam his lifetime best 1:57.70 this morning to land just over half a second shy of Aaron Peirsol’s 15-16 NAG Record. Tonight, he touched 7th in 1:58.18 behind Daniel Carr (1:57.91). With his time from this morning, he’s the 3rd fastest ever in his age group behind only Murphy and Peirsol.

Kelsi Dahlia, formerly Worrell, tied her American Record with a 25.48 as she dominated the race. With that, Dahlia earns the first roster spot for the 2019 World Championships. She still has to qualify for pan Pacs in the 100 fly, but it’s extremely likely given her showing today. The only other swimmer to break 26 tonight was Kendyl Stewart, who had a breakthrough swim with a 25.83. That lowered her best time by a tenth, but it was the first time she’d swum her best since Worlds in 2015, where she represented the U.S. in the 50 and 100 fly.

The prelims tie set up a great race between Michael Andrew and Caeleb Dressel tonight. it was a close on into the finish, but Andrew earned a spot on the 2019 Worlds team as he out-touched American Record holder Dressel by 4 hundredths for the win, 22.93 to 22.97. That’s a new Championship Record for Andrew and makes him the 3rd fastest American in history.

Dressel has yet to qualify for Pan Pacs or Worlds yet after finishing 6th in the 100 free yesterday and 2nd in this race. It’s safe to say he isn’t rested too much, but he showed enough speed tonight to think he’ll safely qualify in the 50 free.

Arizona’s Chatham Dobbs continued his impressive showing at this meet, knocking almost 4 tenths off his best for bronze in 23.38. Former Arizona All-American Giles Smith was 4th in 23.64, out-touching Texas’ John Shebat in 23.69.

Kinda off topic, but I’m watching the fencing coverage on the Olympic Channel before the swimming, and having it muted probably doesn’t help, but I have no idea why they’re doing tag team matches!

They should really make those swords sharper and less bendy IMO.

Lucky you get Olympic Channel

Who else is ready to see OUR BOY MICHAEL ANDREW take down the horrid and overrated CAELEBEEB DWESSEL!?

Many people on this site have compared him with Phelps frequently though.🙂

And people speak of Phelps and Dean Farris in the same sentence; doesn’t mean Phelps is overrated.

it means Dean is underrated

Agreed his LCM times are slow… 🙄

Spelling is overrated as well.

Have you ever met a swimmer in the wild? Most are awkward AF.

I am appalled. Ban this man immediately.

I’m really like MA this year. Funny: the guy who is always tapered (er, ready to race fast) vs the guy who didn’t taper. Hope he gets it.

Michael’s 8 Golds in 1 Olympics is the only swimming feat that can top Dressel’s 17.63. If you’re comparing 1 swim vs 1 swim, nothing comes close to Dressel’s SCY 50.

Yes, winning 23 gold medals in 4 Olympics, and the 200 fly at 31, is too long and boring (nearly obvious) in comparison with that dazzling 50 SCY…

Who in the world care about bathtub! Usain Bolt would likely swim a 16.xx if you managed to put him in one…