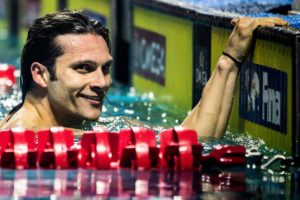 Giles Smith is a huge inspiration to sub 6-foot swimmers who seek greatness. At 5′ 10″, Smith has become a familiar name among the best in the NCAA, and boasts an Olympic Trials finals appearance. He was born to parents Harold and Marcia Smith in Baltimore, MD, on November 28, 1991. He attended McDonogh High School, where he was a 5-time All-American, 14-time Maryland state record holder, and the first high school swimmer from Baltimore to break the 21 second barrier in the 50 yard freestyle. He left high school as the national high school record holder in the 50 free and with five US Open cuts in yards. His 19.74, 44.29 and 1:37.79 in the 50, 100, and 200 yard freestyle as well as 48.30 and 1:49.60 in the 100 and 200 yard butterfly made him a highly coveted college recruit.

Smith swam his freshman year at the University of Tennessee. He was a member of the Volunteers’ 200 and 800 yard freestyle relays which qualified for the 2011 NCAA Championships and earned All-American honors. Smith was named to the All-SEC Freshman first team. Despite these honors, he gained time in the 50 free and 100 butterfly, his signature events. Smith decided to make some changes and took his talents to the University of Arizona, joining American record holder in the 100 and 200 yard breaststroke Kevin Cordes as a Wildcat.

Smith continued to impress during the 2012-2013 season as a Wildcat. He was part of the 3rd place 200 medley relay and 4th place 200 free relay at the PAC-12 Championships, splitting a 20.24 fly leg in the medley as well as a 19.48 in the free relay. He also placed 3rd and 8th in the 100 fly and 100 free, respectively. Smith’s 45.68 100 fly at the 2013 NCAA Champs was good for 6th in a tight field chock-full of 45s. He was 19th in the 50 at 19.68, although he led off the 200 free relay in a 19.59 at prelims. ‘Zona would go on to place 7th in that relay at finals. Smith’s biggest contribution was in the finals of the 400 medley relay. Coming into finals 5th behind leader Cal, which featured juggernaut butterflier Tom Shields, Coach Hansen decided to switch Carl Mickelson and Ellis Miller for Cordes and Smith. After Cordes’ inconceivable sub-50 split in the breaststroke, Smith pulled a 44.86 to give anchor Nimrod Shapira Bar-Or a 2-plus second lead over Shields and mighty Cal. Arizona’s winning relay at these NCAA Champs finished in a 3:02.09, coming dangerously close to a flurry of records, including the NCAA record and American record. Their time is actually considered a “textile record,” as the other records were achieved in 2009 before the full-body tech suit ban.

At the 2014 Pac-12 Championships, Smith tallied an individual gold in the 100 fly (45.92) as well as two more top finishes in both medley relays as the fly leg of each. He split a 20.09 on the 200 medley relay, nearly breaking 20 seconds in the process, as the Wildcat foursome of Mitchell Friedemann, Cordes, and Brad Tandy shattered the Pac-12 meet record previously held by Cal. Smith also picked up a 12th place finish in the 100 free (43.76), a 22nd place finish in the 50 free (20.16/20.05p) and a 2nd place finish in the 400 free relay. Smith’s only individual race at his final NCAAs was the 100 fly, where he finished 4th overall (45.43/45.20p). Unfortunately for the Wildcats, 2014 was the year of infamous medley DQs. In finals of the 200 medley, it was Smith who jumped the start, taking away from his insane 19.89 fly split on a relay that would have likely placed 2nd had he not left early. The 400 medley relay, quite possibly the favorites with American record holder Cordes on the breast leg, didn’t even make it past prelims, as the breaststroke star jumped his start. Nonetheless, Smith swam well on Arizona’s three free relays (yes, he swam all five relays for ‘Zona). He swam the 2nd leg on the 4th place 200 free relay, the 3rd leg on the 14th place 800 free relay, and the lead off leg for the 12th place 400 free relay. Despite losing around 70 total points on those medley DQs, Smith and the Wildcats took home 7th place at Smith’s last NCAA Championships.

Smith was also chosen to swim for the US at the 2013 World University Games in Kazan, Russia. He contributed as anchor of the 4×100 meter freestyle relay, going 49.52 to secure 4th place overall in that event.

In Toronto, Smith took gold in 100 meter butterfly in 52.04, setting a new games record by one hundredth of a second. He also picked up a silver with his USA teammates in the 400 meter medley relay.

On June 11, 2019, Giles Smith was announced as a member of the DC Trident ISL team, headed by GM Kaitlin Sandeno.