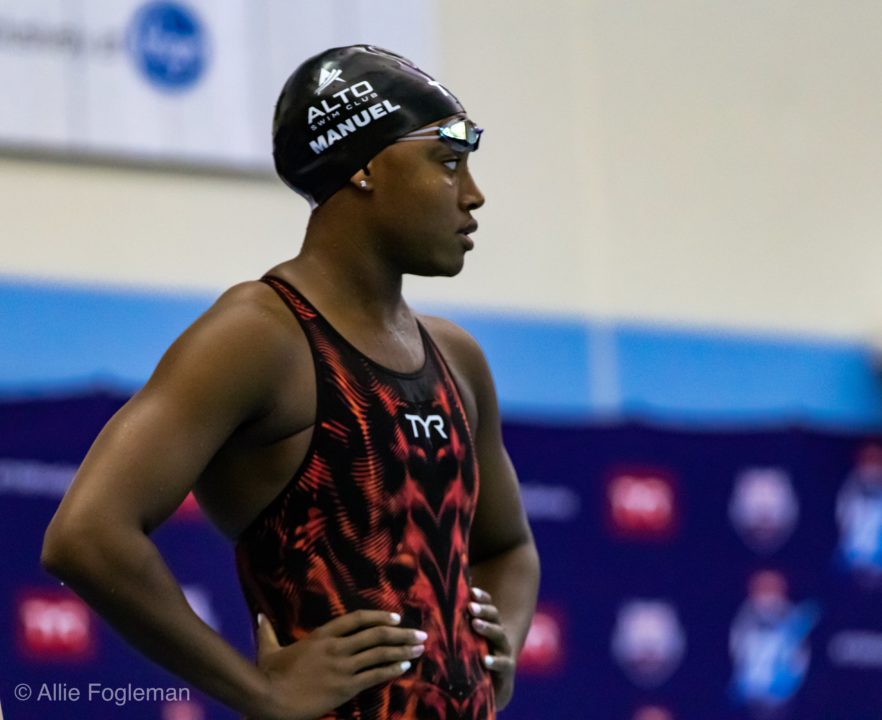 USA Swimming has announced the formation of two new committees focussed on providing strategic guidance with regard to equity, diversity, and inclusion. Current photo via Allison Fogleman

USA Swimming has announced the formation of two new committees focused on providing strategic guidance to USA Swimming staff and other sport leaders with regard to equity, diversity, and inclusion.

The first group, the Black Leadership in Aquatics Coalition (Team BLAC), is comprised of a group of past and present US national team swimmers and has a mission of being “the aquatics leaders of the Black voice and to impact the sport of swimming through exposure, resources, and mentorship.”

The second group, called the DEI Council will consist of members of the US swimming community and will serve to “bring together a group of diverse individuals to consult, deliberate and provide strategic DEI feedback to USA Swimming.”

Chairperson of Team BLAC, Maritza Correia McClendon made history in 2004 when she became the first Puerto Rican of African descent to represent the USA at the Olympics in the sport of swimming. Additionally, she was the first black American break a world record in swimming when she broke the 4×100 medley relay record along with Courtney Shealy, Kirsty Kowal, and Keegan Walkley swimming for Georgia at the 2000 NCAA Swimming Championships. Joining McClendon on Team BLAC as history-makers are Simone Manuel and Anthony Ervin. Manuel was the first African American woman to win an individual Olympic gold when she broke the Olympic and American records in the 100 free final in Rio 2016 and Ervin was the first US swimmer of African descent to win gold in an individual Olympic swimming event. when he won the 50 freestyle in Sydney 2000.

Of the committee, McClendon said “we are glad USA Swimming is taking the initiative to lean on, and hear from, its Black athletes as they tackle the need for actionable change to address why Black people continue to be underrepresented in the sport of swimming. While there has been a positive impact on the drowning statistics plaguing the Black communities, there has been a very slow change in the percentage of Black members in USA Swimming.”

Mariejo Truex, Senior Director of Education & Programs at USA Swimming will take of the role of Staff Lead for the DEI Council and will be joined by a team 34.

USA Swimming Board Of Directors Representatives

Commenting on the initiative from the DEI Council was USA Swimming Managing Director of Sport Development Joel Shinofield.

Shinofield explained that “USA Swimming’s internal DEI team has been operating for more than a decade, focused on serving, supporting and highlighting under-represented swimming communities across the country,” “We value having experienced and impassioned voices to help guide our efforts and very much look forward to working with all these individuals to further our initiatives.”

One example of USA Swimming’s ongoing diversity programs is its annual National Diversity Select Camp for which 48 junior athletes are selected and invited to train at the U.S. Olympic and Paralympic Training Center. Alumni of the program represented on Team BLAC include Olympic gold medalist Simone Manuel, and 2019 World Championship bronze medalist Jack Levant. Earlier this year, Team BLAC chairperson Maritza Correia McClendon was announced as an attendee and mentor for the 2020 version of the camp.

With a renewed focus on diversity and racial equality amid a summer of nationwide, and worldwide, protests, USA Swimming is one of several organizations both within the world of sports and outside of it to launch such diversity committees. Within the NCAA for example, the Southeastern Conference (SEC) Council on Racial Equity and Social Justice, Atlantic Coast Conference (ACC) Committee for Racial and Social Justice, and the Big Ten Anti-Hate and Anti-Racism Coalition.

Not trying to downvote, but want to clarify-is this Black only or Black majority? If so, this group should not be called Diversity.

I am mix race, but never felt I was disadvantaged or unprivileged. I think USA Swimming should focus more on low income communities, the areas where kids tend to be abused or neglected. That is where draining happens often. Yes- I know they do Splash thing, but visiting some areas once twice is not doing much.
They should tie up with community outreach centers in those low income communities.

Therefore anyone who come from such environment should be on the board regardless their race/ethnicity- NOT color of skin.

Congrats to Maritza, she’s an amazing woman with great leadership and effective ideas for a committee like this. Hopefully USA swimming actually uses this committee to do more than just the virtue signaling they’ve done in the past.

DEI provided an outreach program on deck at almost every AG meet (last season). I commend these volunteer workers for their enthusiasm and passion to educate Black, Latino, Asian, and other minority ethnic groups about DEI. Some financial assistance and other resources are available to help these individuals start/continue with their interests in swimming. Fast forward today, Team BLAC is formed? Is this another attempt to favor one minority group over another? My kid is mixed race and relatively successful (locally and nationally) in the water. We support DEI but concede DEI resources for other athletes. Teamwork makes the dream work?

National Diversity Select Camp – In the name of racial equality and inclusion, let’s segregate 48 minority athletes to participate in a training camp…

Wow – have we gone full circle on the wokeness scale? We are so progressive that we have regressed…or something like that.

What is this committee’s view on the cold blooded shootings of two Los Angeles policemen that were protecting their community? Is this committee going to donate to the fund to find and arrest the killer? What are this committee’s views on burning down buildings in the name of reparations? Black on black crime? Disrespect of police and the disregard for following their instructions? Treatment towards women (Jacob Blake)? Overuse of the “victim card”? I’m all for fairness and equality, but I’m also interested in the answers to these questions before throwing in my support.

You must have misread the article. This is not the “solve all of America’s crime problems” committee. While I’m sure as individuals, the members are interested in such things, I do believe that as a committee, that their primary focus is diversity as it relates to swimming.

Read their mission statement: “ has a mission…to impact the sport of swimming through exposure, resources, and mentorship.”

Also, they don’t need your support. They were formed simply to advise USA swimming. Business form committees to improve their business.

Finally, it’s almost ironic how you said “overuse of the “victim card” followed by “I’m all for fairness and equality…”.

It seems you’re upset or scared about something, but you’re looking to a committee full of Olympic swimmers to solve it…

What about representation to the Native American swimmers? Whoo on the committee is “original American”?