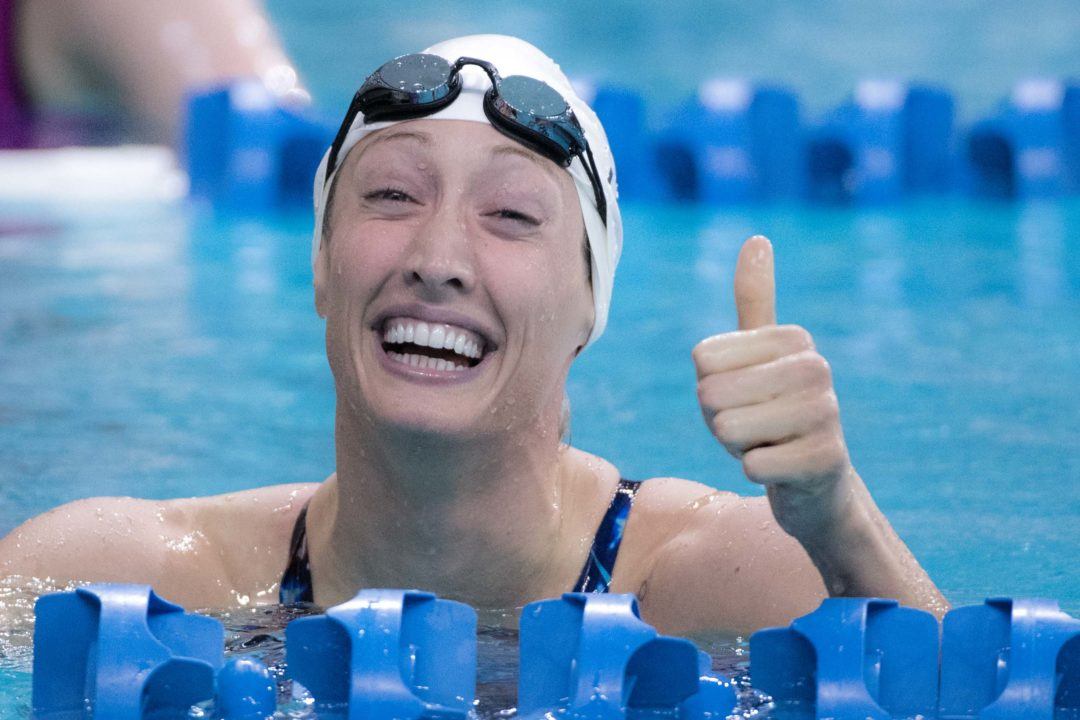 The 2012 Olympic gold medalist is aiming to join Bob Bowman at Arizona State University in the lead-up to the 2021 U.S. Olympic Trials. Archive photo via Mike Lewis/Ola Vista Photography

Breeja Larson is looking to team up with one of the most accomplished coaches in swimming history as she makes one last charge at next summer’s U.S. Olympic Trials and potentially the Olympic Games.

Larson, 28, had transitioned from training with the Phoenix Swim Club (PSC) elite group over to USC and coach Dave Salo in October of 2019, planning to stay in California through the summer of 2020. But once the COVID-19 pandemic hit, like many, she was forced to readjust and is now aiming to join Bob Bowman‘s pro group at Arizona State University.

“Salo was leaving USC, and kind of retiring from college coaching, and so he didn’t really have a pool,” Larson told SwimSwam in a phone interview. “We didn’t know when the pandemic was going to end, and I was just kind of sitting in my apartment in California with no purpose to be there, really. So I packed up my bags and came back to Arizona.”

Having been back in her home state since mid-March, Larson has found various ways to train amidst the pandemic, including in someone’s backyard pool, with PSC and in some open lane swims, but the current objective is to join Bowman at ASU. Due to the pandemic, and various university restrictions regarding pool time, the 2012 Olympian hasn’t been able to join yet, but remains confident it will come through.

“Right now I’m just trying to see where things kind of lie with training with ASU,” she said. “I’m working with Bob right now (sending her workouts), but we’re going to have to wait and see how things kind of pan out. Because I think a lot of university systems are giving pro swimmers a hard time with water time, so we’re just waiting it out to see what happens. I’m kind of in limbo right now.”

A native of Mesa, Ariz., Larson has limited experience with Bowman, only being coached by him on big National Team trips, but has always thought highly of him, and when some ex-teammates shared how much they enjoyed training with him, she knew she had to try it out.

“I wanted to look at all of my options at the end of the summer of 2019,” she said. “I really wanted to train with Dave (Salo). He’s an extraordinary breaststroke coach and a really great person to be coached by. And I wanted to stay in Arizona but I wasn’t sure if Bob was taking in any more professionals. I had gone to USC and really enjoyed my time there. I just needed something a little bit more stable.

“So when my teammates started training with Bob, they said they really enjoyed the program and that they were doing really well there, and so it just seemed like a really incredible opportunity to try and work with Bob and kind of see how this last year would pan out.”

While the logistics get worked out, Bowman remains Larson’s “first priority” for training through until 2021.

“I know he’s doing his best on his end to figure things out, so it’s just trying to be patient,” she said. “I want to stick it through, especially out of respect for him. If he’s going to be giving his best effort to try and get me into ASU, then I’m going to try and stick with that. But there are always other options out there, but I would rather stay in Arizona right now. It’s where my boyfriend is, it’s where my family is.”

In addition to Bowman’s pedigree, which includes leading Michael Phelps to 28 Olympic medals, Larson also is looking forward to training with some old teammates, including Giles Smith and Brad Tandy.

“I really enjoy training with them, we get along really well,” she said. “That was one of the main pulls. If they really love training there then I’d love to give it a try. Allison Schmitt is there right now and she’s always a ray of sunshine, she’s really fun to be around. Hali Flickinger is there. I was honestly really excited to train with more male breaststrokers as well.”

Leading into the now cancelled 2020 Olympic Trials, Larson was raring to go. After breaking through and qualifying for the 2012 Olympic Games, winning a relay gold and placing sixth individually in the 100 breast, she had missed the 2016 team by two spots. She was on track to perform at her best in 2020 before the deferral.

“I was feeling very confident with Trials coming up, so it was a little heartbreaking,” she said. “I definitely went through a couple of weeks of the self-pity stage, just being really angry that I couldn’t really point a finger at anyone.”

Since the beginning of 2019, Larson has been the fourth-fastest American in the women’s 100 breast, just over seven-tenths shy of #2 ranked Annie Lazor.

Not only was the three-time NCAA champion with Texas A&M ready to compete at her best this summer, but Larson was also anticipating concluding her career and moving onto the next phase of her life.

“I was extremely distraught,” she said regarding the Olympic postponement. “I was ready to be done. I wanted to kind of retire this summer. And it was really, really hard that it was taken away. It took me a while. I had a lot of really long discussions with coaches just trying to see what the benefits were to continue swimming.

“So it was really, really hard to make the decision to postpone because I was getting really excited. I’ve done a lot of mental work with the transition that I knew was coming, and so it’s frustrating that I don’t get to see that to fruition just yet.”

All of Breeja’s previous coaches, Salo, Bultman, McCaffery and Djang, would be much better options than Bob Bowman for her to improve her time and increase her chances of making the US Olympic team.

Another post & run…. why don’t you try to quantify those statements a bit more

Love the intentions John but maybe we need to ask questions…

Only one of those guys has helped someone get to the Olympics, and as she said, he won’t have the same pool availability.

I will have to check back frequently to find out if you ever qualify your comments vs “post and run”.

Im just here for the “Bob Bowman is washed up” comments

Don’t forget the personal trainer vs coach comments as well. 🙂

I hope she thinks this through. Going to train with Bowman would be a huge mistake for her.

Because HE’S A PERSONAL TRAINER, NOT A COACH! Or so I’ve heard. Repeatedly.

Are you like a disgruntled former Bowman swimmer or what? Schmidt, Phelps, Kalisz, Becca Mann, and lots of experience guiding older Olympic veterans back to the Games. Sure, he’s not a star college coach, but then again, Nick Saban sucked as a pro football coach. Plus, where the F else is she gonna swim? She swimming in lap lanes and backyard pools. College pools are practically all going to be unavailable.

The past few years…she’s been in the Pro Group with PHX Swim Club.

Not exactly a ton of U.S. Olympic experience in that group.

Add Hali Flickinger to the list, as well. Doesn’t hurt to switch coaches if the routine has become stale.

Comparing Bob Bowman to Nick Saban is a ridiculous comparison. Bowman isn’t even in the ballpark. How can you compare a man that has developed and coached some of the greatest teams in the history of college football to a man that is nothing more than an accomplished personal trainer??? You’re right about Bowman not being a star college coach. Not even close because he’s not even average. He’s done a very poor job at Arizona State and I’m not only shocked at how much they’re paying him, but I’m shocked that he still has a job there based upon the poor results, numerous transfers and the sexual harassment incident (that he admitted to) from 2011 that came to light… Read more »

Pro swimming is an individual sport. Pros actually want personal trainers, as you call him. Personal trainers have many clients. Count the number of Olympic medals Bowman-trained or developed swimmers have produced. Name another active coach who has produced more (probably Eddie, and that’s only because he’s been around longer, and that’s it). Go ahead, reply to this with the number of Olympic medals Bowman-trained or developed. You won’t because you have some delusional rage going on about him. You were right about only one thing — the sexual harassment incident.

I do not have a clue how Bowman coaches and treats college swimmers, nor do I care. I do not care about him as a person either. All I know is he coached the most beautiful thing in all swimming – Phelps’ butterfly technique. It is a perfection, and for that alone he is a swimming genious.

Guerra, your hate for Bowman and ASU is getting old! Move on dude!