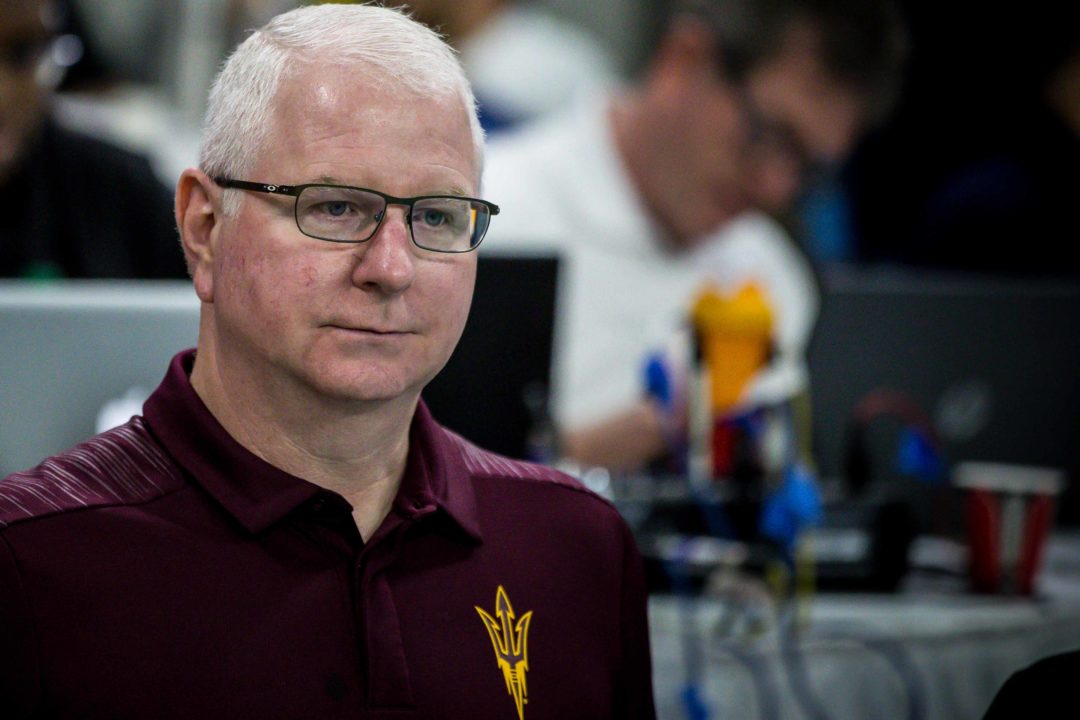 Bowman has a small group of pros, including Allison Schmitt and Hali Flickinger, who have been training at Mona Plummer Aquatic Center in Tempe, Arizona. Archive photo via Jack Spitser/Spitser Photography

Arizona State University head coach Bob Bowman has already been vocal about how he feels about postponing the 2020 Olympic Games. “It would take a lot of pressure off,” he told the Associated Press earlier this week.

But as swimmers and coaches scramble to find training space with both the US Olympic Trials and the 2020 Games in Tokyo still scheduled to run on time, Bowman has managed to have his small group of professionals train once per day at ASU’s Mona Plummer Aquatic Center.

“We’re giving up a few practices, but we felt it was best to minimize how many times they go,” Bowman told the Arizona Republic, as typically leading up the Olympics the athletes would have doubles three days a week.

Schmitt has trained under Bowman for the majority of her career — other than when she went to college at the University of Georgia — which included taking a redshirt in the lead-up to the 2012 Games in London where she went on to win three gold and five total medals, including an individual title in the women’s 200 free.

Flickinger, also a former Bulldog, only recently made the move to train with Bowman at ASU after last summer’s World Championships. The 25-year-old was the silver medalist at the 2019 World Championships in the women’s 200 fly, and is the fastest swimmer in the world in the event since the beginning of 2019.

On the other end of the spectrum are Bowman’s college swimmers at ASU, who aren’t allowed to train due to the coronavirus pandemic and restrictions from both the university and the Pac-12. The team has a total of 17 athletes qualified for the US Trials, scheduled to run June 21-28 in Omaha.

“It’s very testing when it comes to your adaptability as an athlete,” said Sun Devil senior and 2016 Olympian Cierra Runge. “You have a routine, you know what you need to do. To not have that is very boring, not having training five hours a day. It’s not comfortable.

“I’ll have that urge to do something and it’s like OK what can I do to keep myself entertained and in shape and in the running for the Games if they have them. You’ve got to keep everything going while having very limited resources.”

He’s taking a HUGE liability risk if any of his swimmers (or family they come into contact with) get very ill.

As many of you are coming to terms with, being a professional is not an outcome. It’s a mindset. We’ll see the outcome by the true professionals when the Tokyo Olympics come along. They literally don’t care what you have to say – as per their usual arrangement with your opinion. Pros, regardless of how and where, are putting in the work. You’re an expert on your opinion right now, and you can be an expert on your opinion in front of your TV when you watch the professionals compete. You are just a part of the noise like any other quad.

I just heard from a very reliable source that if in fact the ioc delays the games to 2021, that Phelps is considering a run at a 5 gold in 200 i.m and one more relay (maybe 4x100Fr or the mixed one).

I heard he already talked to bowman. Bowman said he is a crazy dude but that he suports him in an unprecedented 5 consecutive title in the 200 Im

Waiting for the ioc decision…

The coronavirus has made “a level playing field” impossible for the Trials and the Olympics. Both should be postponed until our country and the whole world, is back to normal and ALL our elite swimmers can train.

Hey Bob – Why not try some social conscience and be a coach who exhibits care for more than sport. Get off the darn pool deck, get your swimmers to quarantine – please. Be a strong leader as you have been so many times in the past. One of your fans.

Why do I feel like everyone hates ASU? Maybe you’re jealous that we have one of the best coaches in the world? Ouch

I swam at ASU and I feel that this is selfish. I feel confident that Ron Johnson would have advocated isolation.

Not about ASU or Bowman. About social responsibility. This is even coming from a Wildcat. Because someone chose to make it public knowledge that the group was still training and lamenting that it was only once a day, that’s why people are piling on.

Nah. The REAL reason is that everyone at home is bored, and they feel like they’re “contributing” to the cause by criticizing others. Unlike a natural disaster, there’s no way to get out and help, so people like to feel as though they’re “helping.”

It shows a fundamental lack of understanding about pandemics. 4 healthy symptom-free people in a 50 meter treated pool with the same group of 5 every day who are otherwise isolating are NOT growing health vectors and impacting the spread of the disease. They just aren’t. And that’s not a denial of how scary the situation is, it’s an understanding of what matters and what doesn’t matter in a pandemic spread.

You have no understanding. If their loved one goes to the grocery store and is exposed, and exposes them… they are all exposed. Unless they are all living in a bubble. They are exposed to everyone their contacts have come in contact with.
To think otherwise is a denial.

People are losing the jobs, resources and their lives. We are asked to stay home in order to flatten the curve. Yet this group feels their training is more important than social distancing?
Everyone thinks their situation is special. And that is what will make this situation last longer.
Families aren’t seeing each other – kids aren’t playing together – even in groups less than 10 people in order to be socially responsible. Wish our elite swimmers had the same respect and consideration of others…

Well stated SWIMMOM! Stay healthy and we will all be fine. Thank you for your clear thinking.