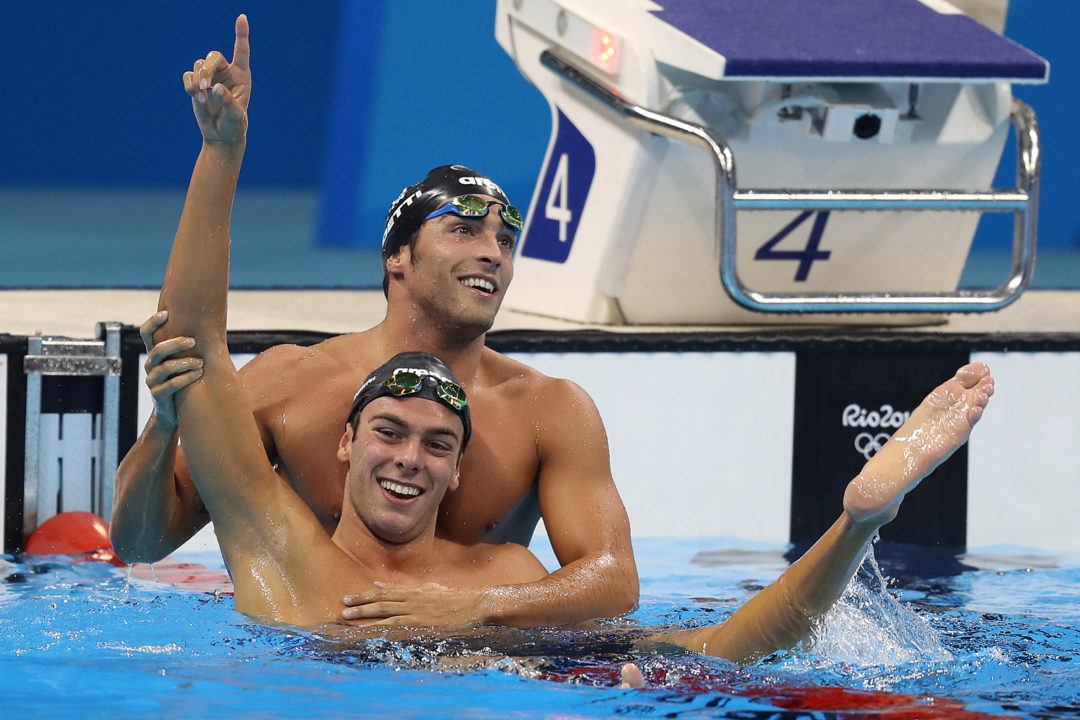 Italians Gregorio Paltrinieri and Gabriele Detti could potentially go 1-2 in the men's 1500 in Budapest. Archive photo via Simone Castrovillari

Ever since China’s Sun Yang was mysteriously absent from the men’s 1500 final at the 2015 World Championships in Kazan, Italian Gregorio Paltrinieri has been the dominant force in the event worldwide. That race was anticipated to be an epic showdown between the two, as Sun hadn’t lost on the world stage since setting the world record in 2011, and Paltrinieri was the new kid on the block after going 14:39 in 2014.

Paltrinieri went onto win gold, and continued to dominate in 2016. He won the European Championship in a best of 14:34.04, becoming the 2nd fastest man ever, and followed up with a 14:34.5 to win Olympic gold by nearly five seconds. Once again he sits atop the world rankings this year by a wide margin, with his 14:37.08 from April over 11 seconds clear of countryman Gabriele Detti. Look for him to win the gold medal easily, and potentially challenge Sun’s world record of 14:31.02.

American Connor Jaeger, who won back-to-back silvers behind Paltrinieri in both Kazan and Rio, has stepped away from the sport, making Detti, the Olympic bronze medalist, the favorite for the runner-up position in Budapest. Detti hit a big personal best in Rio at 14:40.86, and as previously mentioned sits 2nd in the world this year at 14:48.21. Even more impressively, the Italian, who also won bronze last summer in the 400 free, lowered his personal bests in both the 400 and the 800 at the Italian Championships in April. He’s the clear front-runner for silver and will look to crack the elusive 14:40 barrier that only seven men have ever conquered.

One of those seven is Australian Mack Horton, who clocked 14:39.54 last year at the Aussie Olympic Trials. He did have his international breakthrough swim in Rio, defeating Sun in the 400 free, but was a bit off his best in the mile clocking 14:49 for 5th. He still sits 3rd in the world this year, but has been much slower in-season (14:51.21) than he has the past two years. This suggests he may be saving his best for the biggest meet of the year this time, which puts him in the race for silver.

Like Horton, fellow Aussie Jack McLoughlin had a breakout swim at the Olympic Trials last year and couldn’t quite recreate it in Rio. He narrowly missed a berth in the final with a 14:56 prelim swim for 9th after going 14:48 in March. He was a solid 14:54.95 this year at Aussie Trials, and should be a factor in the final. McLoughlin has also branched out this year, qualifying himself to compete in the 5K Open Water in Budapest as well.

Including Jaeger, half of last year’s Olympic final won’t be present in Budapest. Jordan Wilimovsky has opted to focus on open water this summer, Ryan Cochrane has retired, and Damien Joly failed to make the French team. This opens up an opportunity for some of the young guns to step and make an impact. One of those is Ukrainian Mykhailo Romanchuk, who has been knocking on the door for a few years now.

Romanchuk first established himself internationally in 2014, winning gold at the Youth Olympic Games in the 400 freestyle. He got himself into the final of this event two years ago in Kazan, and achieved a new PB at the 2016 European’s in 14:50.33 to win bronze. After missing the final in Rio, the 20-year-old exploded on the World Cup circuit last October. He won the mile at three consecutive meets, including posting the third-fastest swim in history at 14:15.49 (SCM), breaking Paltrinieri’s World Cup Record. He’s been solid this year, within five seconds of his best, and will turn a lot of heads come Worlds. Watch for this guy.

Norway’s Henrik Christiansen and Poland’s Wojciech Wojdak are two other Europeans who are on the rise and have been making moves as of late. Both men made it through to the final of the 800 in Kazan as teenagers, and Christiansen also was a finalist in the 1500 in Rio. Both men have performed well this year, including going 1-2 at the Stockholm Open in sub-15 minute fashion. They are setting up to be medal contenders in the distance events for years to come.

And then there’s Sun. Still only 25, there’s no doubt he has the talent to compete with Paltrinieri for gold. However, he hasn’t given us much to believe he will. After his disastrous 15:01 in Rio, he’s been 15:04 this year, though everyone knows a huge difference can be made with a taper in an event like this. He’s been through a lot in the last few years. From a 3-month doping ban in 2014, no-showing the 1500 final in Kazan, being involved in multiple warm-up altercations, and then most recently news breaking post-Rio that he fathered a child.

As he moves forward, it’s certainly possible he could slowly gravitate away from this event. He did win the 200 in Rio and took silver in the 400, so this summer will be a good test to see whether or not he’s committed to the training necessary for the mile. He has committed himself to 2020, and did hint post Rio he would continue to train for the 1500. In that interview he also mentioned he was sick prior to swimming the mile at the Olympics. We can’t ignore the fact his fastest swim in the last three years is 14:49, but everyone knows what he’s capable of at his best.

Daniel Jervis made a triumphant return to the British National Team this year, lowering his best for the first time in three years to qualify for Worlds in 14:51.48. Jervis won bronze at the 2014 Commonwealth Games, but failed to make either the 2015 Worlds or 2016 Olympic squad. His swim at British Trials was twelve seconds faster than he was last summer to win the U.S. Open, obviously a huge breakthrough, but puts into question if he can drop anymore time this season.

With Jaeger and Michael McBroom unofficially retired and Wilimovsky focusing on open water, we saw youngsters True Sweetser and Robert Finke step up at U.S. Trials to qualify for the team in an exciting battle. Coming in at 14:59 and 15:01, both men will probably need about a four or five second drop to have a shot at the final, which is a tough task when you only have a few weeks in between competitions.

Don’t sleep on another youngster, Russian Ilya Druzhinin, who cracked the 15-minute barrier in Rio and has been on an upward trajectory. Last year he dropped 11 seconds from Russian Trials to the Olympics where he hit 14:59, and was 15:03 at Nationals this time around. A similar drop and he’ll be a finalist.

Others to watch include Jan Micka of the Czech Republic, German Florian Wellbrock, and Hungarian Gergely Gyurta, who will have the crowd behind him in his quest to make the final. We also can’t forget that epic 1650 at NCAAs, where Austrian Felix Auboeck and Egyptian Akaram Mahmoud were among the four men who went under the previous NCAA Record. Mahmoud actually took 4th in this event in Kazan, and though neither has had a particularly impressive long course season, they can’t be counted out after what we saw in March.

Darkhorse: After a rough showing in Rio amid a doping controversy, South Korea’s Park Tae Hwan came back with a vengeance shortly thereafter. He won three golds at the Short Course World Championships in December, including a defeat of Paltrinieri, the defending champ and world record holder, in the mile. Though he’s always been more of a contender in the 200 and 400 internationally, there’s no ignoring his 14:15 swim in Windsor, and his solid showing of 15:06 at the Atlanta PSS indicates he does intend to give this event a go in Budapest.

How can you not say Aubock or Mahmoud places top 8?

I am doing my best for Paolo & italian swimming & my lime green Vespa chances .

I think Henrik Christiansen can make a solid showing in this event, maybe not enough to medal, but at least a new NR. My prediction is 14:47 for 5th place. I think he’ll get it in the 800 though?

I thought Paltrinieri said he was going to try and win the 10k and the 1500 this year, but I can’t find him on any entry lists. Did that fall through?

Sun Yang will not swim to be second. No show 98%

Didn’t Park state that he WASN’T targeting being in the 1500 for this Worlds?

Anyone else confused how Paltrinieri’s leg got in that position in this article’s picture?

Paltrinieri looks a reasonably safe bet but after that its rather more open.

Detti has to be considered closely but much will depend on how he’s backed up from other races …. but then again, so will many others in this field.

Sun hasn’t done much in recent years in this event so whilst he has to be respected, he also carries some question marks.

I’ll agree with Dee that Jarvis is a very reasonable outside bet. The Americans will most likely need to drop some seconds to make the final but so far this year, the standards (Paltrinieri excepted) in this event have been rather pedestrian so I would give them some chances of making the final and once… Read more »