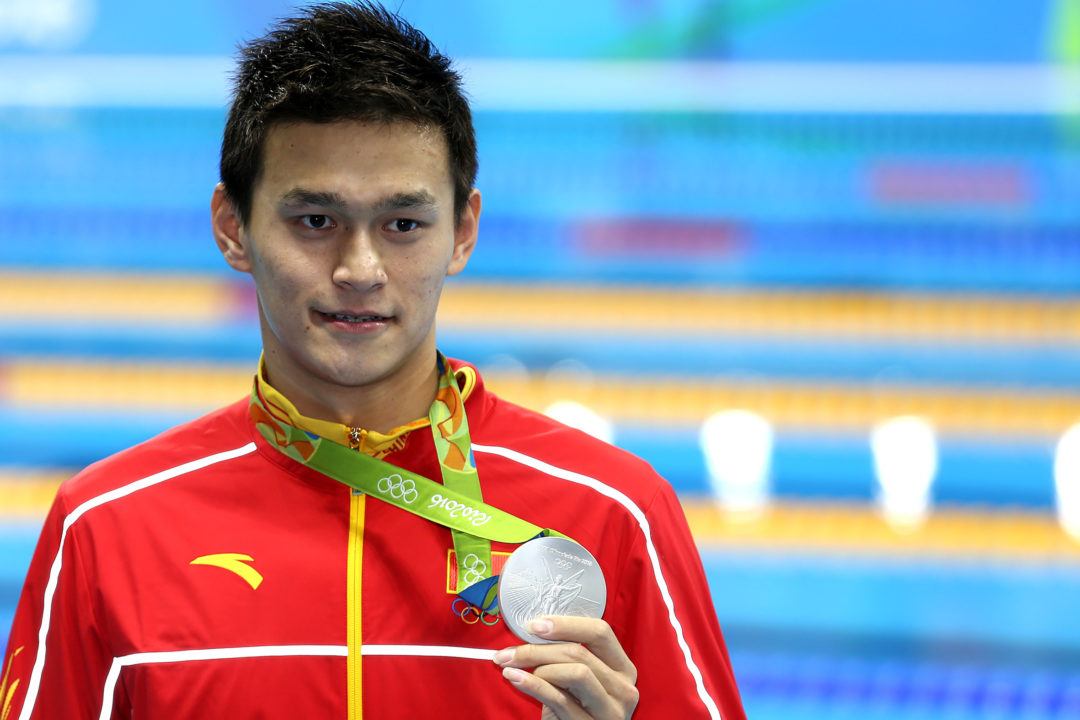 China's Sun Yang continues to make headlines for what he does outside the pool. Archive photo via Simone Castrovillari

Olympic medalist Daiya Seto is among a group of top swimmers headed to the 5th Japan Professional Swimming Championships.

Siobhan Haughey got right back into racing in Toronto, taking the win in the 200 free and 100 free as well as a 3rd place finish in the 400 free.

Sun Yang solidified himself as a Chinese and international swimming super star back in 2012 when the then-20-year-old claimed individual gold medals in the 400m and 1500m freestyle events at the London Olympics. Since then, however, even after claiming 2016 Olympic gold in the men’s 200m freestyle, swimming’s ‘bad boy’ has perhaps made even more headlines for his antics out of the pool than for his stellar performances within it.

Sun quietly served a 3-month doping ban back in 2014, was involved in two different warm-up pool altercations at competitions, and was also a no-show for the 1500m final at the 2015 FINA World Championships. The Chinese star was also busted back in 2013 for driving without a license when the Porsche he was driving was brushed by a bus. No one was hurt, but Sun did suffer a China-imposed suspension from competition.

Also back in 2013, Sun Yang‘s then-longtime coach Zhu Zhigen was upset with his protegé’s increased commitment to his sponsors, which he said was detracting the freestyle specialist from his training. At the same time, Sun was punished by the Zhejiang College of Sports for having conducted himself in a manner contrary to several team rules, including having a highly publicized love affair with a flight attendant, a relationship of which his  Zhu did not approve.

Flash forward to 2016 and it’s now been revealed by several Chinese news outlets, including Asia Today, that the swimmer’s relationship with the flight attendance, since identified as Nian Nian, produced a child. The boy is said to be 2 years of age. According to reports, the pair’s love affair began back in 2010 before the relationship went public in 2013, which resulted in Sun Yang‘s punishment by Chinese swimming. Sun Yang and Nian Nian are reportedly no longer a couple.

I am Chinese and I have to say that It is TOTALLY ABSURD RUMOR. This rumor originally spread from the biggest and the most shameful paparazzi in China. The whole thing was like: Somebody sent the message about this rumor on Weibo(a Chinese social media) to paparazzi for money. However, the paparazzi didn’t give him money and already posted this rumor on Weibo. That men admitted that was rumor and criticized that paparazzi for dishonesty. You can find out the whole thing on Weibo. So it’s just a absurd rumor.

i know next year sun yang will
be strong enough to win all
his races his the king of all
swimming, he makes the water
shine of blue jewels, he’s superman,

You never know how strong you are until being strong is your only choice you have,

Phelps fathered Boomer before wedded, SO?

just let the man live geez… if you watch his documentary on youtube he’s literally miserable swimming all his life. He’s grown and needs to have his own life experiences

Congratulations Sun Yang… growing up is full of drama and hardship, and I’m sure you ain’t gonna be a deadbeat dad!

Phelps fathered boomer before wedded. So?

So he had an offspring, who cares? Ryan Lochte is the real disgrace among all swimmers.