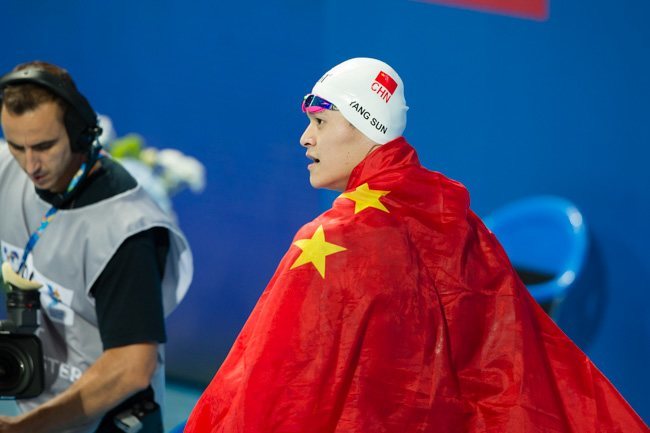 Sun Yang absolved of any wrongdoing by FINA in relation to warm-up pool altercation at World Championships. Archive photo via Tim Binning/TheSwimPictures.com

Hahahahaha In a shocking twist events at the 2015 FINA World Championships, Chinese Olympian Sun Yang was a no-show for the men’s 1500m final.  We later found out that Sun Yang withdrew from the final due to a heart condition, but there was another surprising situation that arose from that same day.

Earlier at warm-ups on that last day of the World Championships finals, as we reported at the time, Sun Yang was involved in a physical altercation with Brazilian swimmer Larissa Oliveira.  The Brazilian coaching staff reported seeing Sun trying to kick and elbow Oliveira after a collision in the warm-up pool during prelims.  Heated words were exchanged among multiple parties after the incident.

Regarding this altercation and Brazil’s subsequent formal complaint to FINA, that organization’s Executive Director, Cornel Marculescu told Reuters today that the situation between Sun and Oliveira was “due to over congestion and a misunderstanding in the warm up pool” and the situation did not warrant further action.”  Additionally, “in Kazan, we have over 1,000 swimmers, so the preparation pool became very crowded”, said Marculescu.

In response to the surprising empty lane in finals, Marculescu commented, “We discussed it with the (Chinese) delegation and the federation and finally with him and he said it was some health problem. His coach was also debating with him, a little bit stronger, to make him swim but he said he can’t.”  Marculescu added, “He’s a great star, he’s a great swimmer. But with the young people, you never know.”

Sun Yang and the Chinese swimming federation issued an apology for withdrawing from the 1500m final, but have yet to comment on the warm-up pool quarrel.

I guess as long as Sun didn’t kick that locker by dolphin kicking on his back it is perfectly ok. He seems to have had a lot of energy to exert all that anger in the locker room considering his heart condition which prevented him from racing.

Wow!!! A photo of a wrecked locker and a competing international swimmer – who declined to be named – on, there you go a whole story! Am I watching Fox News?

It’s cute how hard you’re trying to bring politics into this.

If you can’t beat him, kill his spirit. Never Fails.

Dude was swimming clockwise like I’m Australia where he trains, and everyone else was swimming counter-clockwise. Of course this Brazillian swimmer is the one that is in the wrong when she runs into him, not the other way around. Dude seems to think he’s above all reproach.

Did anybody read this? I saw it today for the first time

Interesting and thanks for sharing.

If you do any amount of research on Yang you’ll realize he has a history of altercations and the one in Kazan is just the latest example. FINA isn’t going to ban him and I think it’s also well documented on how corrupt they are.

I recall that FINA wanted to invite Mike as an independent entrant not from any country but as a swimming ambassador. MP has too much class and dignity to do anything like that, but if you think about it that could have been really funny in a FINA kind of way.

The Olympics needs to add a FINA event. 50 meters underwater with gold bricks duct taped to bodies with neon pained advertisments for Yukult and Gatorade. Points added if the gold bricks stay dry before being airlifted onto a helicopter to be retired into a private bank vault in Zurich. That would be awesome.

Yes, FINA isn’t going to keep an A-lister from swimming if they can help it and based on the past year I think they’ve looked the other way a few times on Yang.

And Phelps get banned for how long for getting caught drinking. If an American had “bumped” someone the whole team would be banned from Rio.

Correct me if I’m wrong, but my understanding is that USA Swimming, not FINA, banned Phelps.

exactly, furthermore marculescu even wanted phelps to compete and he somehow could have if he wanted but he wouldnt have represented usa then

Not for drinking…drunk driving. There is a big difference there.

Is there anything Fina won’t clear him of?! He seems to have a free pass…

And it is called a warm up pool Cornel, not a preparation pool.

At the very least get some swimming terminology correct considering you’re back is likely hurting from carrying cash all the way to your bank to monitor this sport.

God, we all deserve better than this clown act.

I’m no linguistics expert, but my guess is that in most languages the translation is closer to “preparation” than “warm up”.

you can count Italian off, it’s literally warm-up pool

Not a big fan of FINA, but please show a little respect to those whose native tongue is not English. Looking at your last name, if that’s your real name, you probably have immediate family members who are not 100% proficient in English. Given the primary function of the pool is for warm-up and cool-down, “preparation pool” is not too bad a translation.

Come on, that is nuts. Warm up pool is a swimming term, not me going on all pedantic. Maybe Cornel is compensating for things to have his own fancier sounding terms when he goes to sell events to royalty around the world. Preparation pool sounds like something a man who was sentenced to do time at a British boarding school for boys would say.

Instead of starting blocks, I could write pool entry devices, instead of lane lines I could call them the lane barriers. Nobody would be real confused about what I am referring to, but I’d certainly come off sounding like an elitist cad or just someone who was watching a meet for the first time and… Read more »