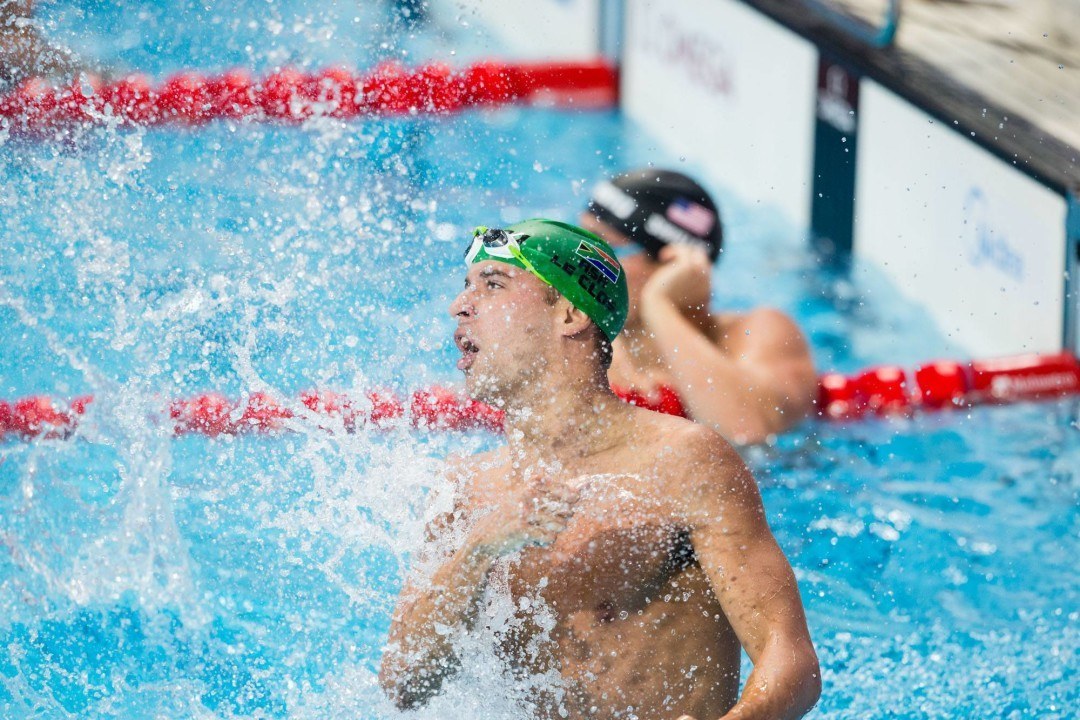 Of his gold medal-winning 100m butterfly race in Kazan, Le Clos says, "I wanted to show everybody that it [the 200 fly] was just a bad race, so I was just happy with the way I bounced back." Archive photo via Tim Binning/TheSwimPictures.com

This summer, swim enthusiasts around the world were eager spectators in the competitive back and forth between butterfly virtuosi Michael Phelps (USA) and Chad Le Clos (South Africa).  Both men put up incredible 100m and 200m butterfly times across the World Championships in Kazan (Le Clos) and the U.S. National Championships (Phelps), but the in-water feud was also fueled by some out-of-pool talk on the part of Le Clos.

Now a month removed from the intense action, Le Clos spoke to Sport 24 about his post-Worlds goals and what it will take for the 23-year old to repeat his monster 2012 Olympics performance when, once again, set upon the world’s biggest competitive sporting stage in Rio next year.

“I want to be known as the best butterfly swimmer of all time and I know if I beat him (Phelps) next year, win the double gold and break his world records there is no question to ask”, said Le Clos prior to leaving for this week’s All African Games.  “I started training hard already, there is no more distractions and I’m going back to my roots where I didn’t have a cellphone and there are some personal things I need to tweak.”

Keep in mind, however, that, come Rio, it may not just be Phelps that Le Clos has to conquer.  As he discovered at world championships, Hungarian Laszlo Cseh is far from being out of the hunt for medals in 2016.  As evidence, Cseh put up a gold medal-winning 200m butterfly time of 1:53.48 at world championships to steal the title away from Le Clos, who finished just two tenths behind in 1:53.68.

Of the second place finish, Le Clos now says, “I learned a lot of lessons from this, it would have been better for me (conceding the title)… it is a bit upsetting but in the bigger scheme of things it didn’t make any difference in my preparation (for Rio).”  Trying to put things into perspective, he continued, “If not it made me hungrier to be stronger, I know I need to go two seconds faster than I did this year because it will take a world record to win it next year.”

Le Clos also candidly admitted that, “The most frustrating thing for me is I haven’t done a PB (personal best) since London, so at the World Cups I will have a full go and see what I can do.” In contrast, Phelps’ National Title-winning 200m butterfly time of 1:52.94 from San Antonio was the fastest the 30 year-old had registered since his world record-setting performance in 2009.

Phelps then followed that up with a head-turning 50.45 100m butterfly to claim his 2nd national title of 2015, clocking a time, which incredibly was faster than his 100m butterfly gold medal-winning performance at the 2012 London Olympic Games.

Reflecting on the scrutiny and media spotlight on both athletes during those intense few days in August, Le Clos now says that his post-race comments, which included “Phelps can be quiet now”, were rooted in the South African’s so-called ‘doubters’. “It was more the fact that I did a time that Phelps hasn’t done in a long time, and it was more the fact that everybody was doubting me and that Michael swam such a fast time in the 200m fly.  Of his own stellar 50.56 100m butterfly performance that won gold in Kazan, Le Clos expressed, “I wanted to show everybody that it was just a bad race, so I was just happy with the way I bounced back.”

According to Le Clos, headed into 2016, he and Phelps are the undisputed “favorites for next year” with “everybody speaking about how big it is going to be with what is going on between Michael and me.” If this summer was any indication of the ferocity with which the two will compete in Rio, Le Clos may indeed be proven right.

I’m surprised that no one has mentioned that Phelps’ 100 fly time at nationals was faster than his time in Beijing, not just London.

And David wins again….excuse the pun.

Can’t wait for the really, really big show in Rio! The swimming talent depth in the world is truly inspiring. I hope all the swimmers do their best and let the hardware hang from the necks of the fastest. Go Team USA!

Dear Lorreta, am I the only reader who spotted your misquote in the title of the story? The Phans are ready to lynch somebody?

On an aside note, I think there is a real question begging answering: how fast would the 200 fly WR be right now if Phelps had not had the goggles malfunction?

Interesting analysis- thanks for this.

I think MP goes God Mode next year. He’s going for the gold and world records. I’ve never doubted MP, and I’m surprised some would.

Le Clos shouldn’t be talking. The “greatest” butterflied wouldn’t have lost the 200, where he is the defending world and Olympic champ. He also didn’t mention… Read more »

You may be the most optimistic time predictor on Swimswam, Bobthebuilderrocks, but I would LOVE to see Michael swim all the times you suggested in Rio, so I give your comment a BIG thumbs up! 🙂

I’ll be thrilled when MP gets those times. 🙂

As we all know, the GOAT is superior to all 🙂

I agree with you, but I still want to see some insane freestyle times by MP. 🙂

I agree with you, but I still want to see MP with some awesome freestyle times, so maybe he leads off on both free relays?

WRs in danger for Rio:

I love your James Guy Prediction, but see him closer to 3:42. I would substitute Hagino for Lochte in the battle for the 200IM WR, but it may turn out to be a battle between the three of them.

No no no no no how often do i have to say it again? if phelps splits the freestyle in his 200im AS FAST AS when he swam his PB (1.54.16) he still gets the WR, he could even be like a quarter second SLOWER and would still break the WR (as far as he swims the first 150 like at nationals)

Chad is practicing the milorad cavic role in the next act of this drama.
Anything can happen in the next 10-11 months but certainly MP and le clos will be the favorites unless something earth shattering happens. Schooling and Conger could spoil the party and no one can discount cseh now he is just focused on the fly only. Personally I don’t see anyone going under 50.