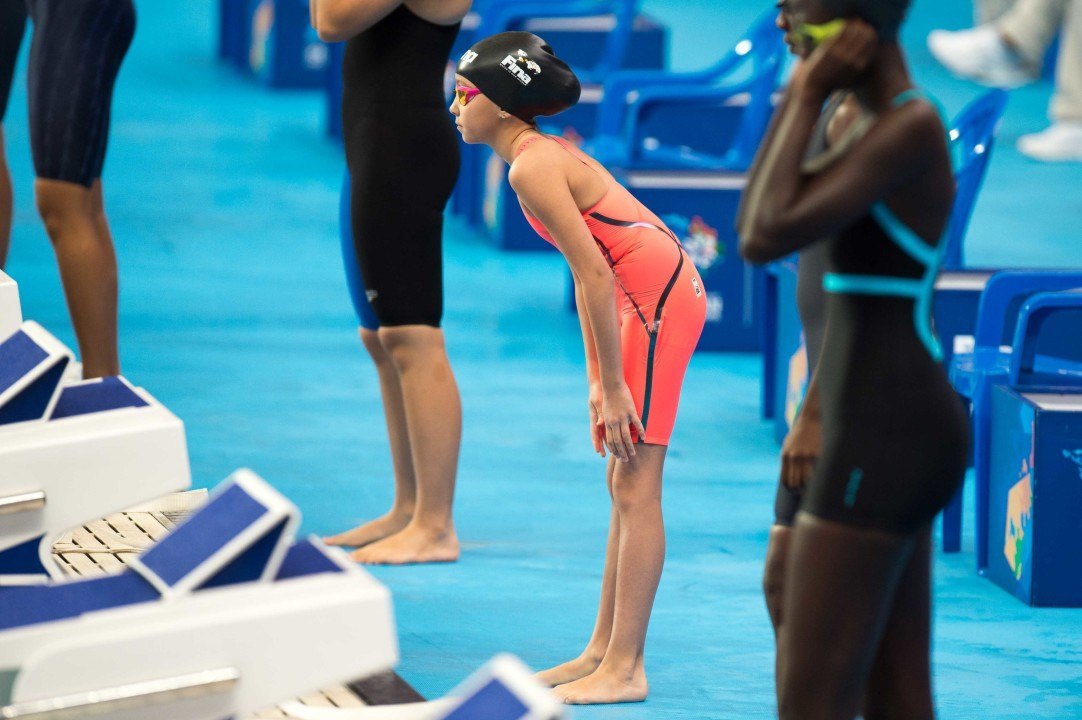 "For her, this is a game and it's better for children to have fun at this and not start at age 10 to take marijuana or cocaine, smoking or drinking alcohol," FINA's president said in defending the presence of a 10-year-old entrant at Worlds. Current photo via Mike Lewis/Ola Vista Photography

“370,000 people drown every year, especially children, and we can not ignore this problem. For her, this is a game and it’s better for children to have fun at this and not start at age 10 to take marijuana or cocaine, smoking or drinking alcohol”

Despite receiving support from president Maglione, it appears FINA will be moving in a new direction and limiting young children from competing at the World Championships. Many people felt Tareq’s participation was politically motivated. Bahrain and Saudia Arabia were rumored to be submitting a joint bid for a future FINA event because FINA can not award the event to a country unless there are equal opportunities for both male and female athletes.

I support young aged children being able to go to the world championships, but what I don’t understand is how a 10 year-old qualified?

I personally think that an age limit should be put on worlds like it is for junior to help prevent overtraining of young swimmers that potentially reach their potential at a young age and do nothing when they are at the right age. I’m not saying the young 10 year old was over trained but the thought of going to worlds, but it’s the fact that younger swimmers who are exceptional swimmers get in the range of the time standard and target that with too much importance considering their age. Taking out the possiblilty of young swimmers to attend worlds could help reduce young, teenage swimmers from being over trained at such a young age.

As long as we are talking athlete ages, how do we go about getting FINA to recognize that age is actual age, not this phony baloney age as of January 1st (December 31st) thing.

Hmm. No age limits for FINA executives but age limits for the people FINA is supposed to serve–the athletes. The hypocrisy of this organization goes on and on. And its esteemed President, Mr. Maglione, makes that statement that its better to have a ten year old Bahraini girl competing at the Worlds than “taking marijuana or cocaine” is just bewildering in its disconnectedness from reality and lack of understanding of Bahraini law. For Mr. Maglione to imply that ten year olds anywhere are predisposed to being drug addicts is plain stupid, let alone the fact that this is an athlete and athletes are less likely to engage in drug abuse. More importantly, Mr. Maglione clearly does not understand Bahrainian law… Read more »

Agreed- better swimming govern ourselves than to have fina intervene. Fina has a history of arbitrary legislation. Bunch of old politicos deciding every one else’s fate. We shouldn’t grant them that power.

There is a minimum age for Olympics too – and we can see how well that works (ie China, gymnastics). So I see no issues arising here.

Look, just because a pre-pubescent female swimmer from a nation that restricts rights in post-puberty females is swimming, and has a wish to go under 34 seconds long course for a 50FR, does not make that participation right. Is she “cute”? Sure. But since when do we rank world-class athletes based on “cute”? Isn’t that just a bit backward?

Worlds is not an event for participation: it is a competition to showcase a nation’s best athletes.

Missy might have done Trials at age 13-ish. Canada had Nancy Garapick at Olympics at 14 and she set a world record for 200BK at age 13. The difference here is that these two girls were FAST, capable and above average in skill, development,… Read more »

“370,000 people drown every year, especially children, and we can not ignore this problem. For her, this is a game and it’s better for children to have fun at this and not start at age 10 to take marijuana or cocaine, smoking or drinking alcohol”

Every time I read a statement by a FINA offical, my IQ drops dozen points. I am running low…

Just wondering if they had this little girl entered because they would not have entered an older female in mixed company? How many females above the age of 12 are allowed to compete in meets in the Middle East where males are present?