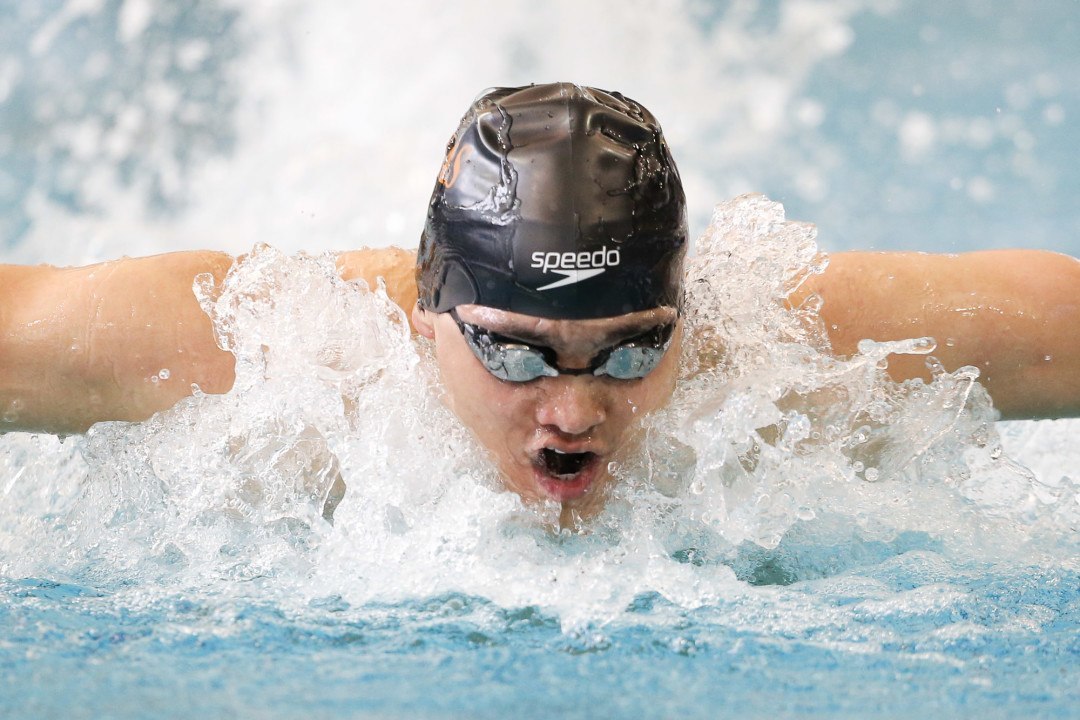 Schooling made up a full second on the first 50 alone, taking his swim out in 19.83 and then brought it home in 23.51. Current photo via Tim Binning/TheSwimPictures.com

Winning their third relay and fifth NCAA title of the weekend, the Texas Longhorns fought back to overtake California on the back half of the 400 Medley relay. California’s Ryan Murphy broke the American record in the 100 backstroke, giving them a significant lead, but it wasn’t too much for Joseph Schooling to handle.

Schooling dove in for the butterfly leg of the relay nearly two second behind California’s Justin Lynch. He made up a full second on the first 50 alone, taking his swim out in 19.83 and then brought it home in 23.51 to finish with a final time of 43.34. That split is now the fastest split in history, surpassing Tom Shields‘ legendary relay split from the 2013 NCAA Championships of 43.48.

Take a look at the comparative butterfly splits below:

On the final leg of the race, Jack Conger cemented their victory with a strong 41.29 anchor split, although it a was a little slower than he was last year. Their final time of 3:00.68 lowers their own NCAA and US Open Records set last year at the NCAA Championships of 3:01.23. California finished second tonight with a final time of 3:01.28.

Take a look at the comparative relay splits below:

I must say I find your conversions much more sound and accurate than others. Those times you converted for Schooling and Murphy are both indicative of their long course progressions in recent years as well, and are well within the realm of possibility at Rio.

I should have explained a little more. When I talk about speed of str Me between walls it’s more about the speed of the turn relative to the speed of stroke. Fliers lose speed on turns because the touch and turn is slow compared to a backstroke turn so having less turns in LCM is actually a benefit when it comes to maintaining speed. Thus the lower factor compared to backstroke. Because women generally swim and use underwaters at a slower velocity the factor is a little less.

I think your calculations are right on! Interruption of momentum to the turn is insightful.

Don’t forget that Schooling’s time is a relay split.
On paper it means 43.90/44.00 flat start.
But it’s only paper.
Of course relays swims are well different than individual swims with the adrenaline and the waves.
But physically he proves he can break that stupid suited record of 44.18.
It will be extremely difficult but hopefully he does it. He needs to be fresh and swim the perfect race.

Absolutely ridiculous times by both, but I feel as though these people saying the conversations mean they will replicate these swims long course is a little optimistic. 49’s? Really? Shields old butterfly relay split was similar to schoolings and the best he has managed is an impressive 51.0 in the long course. We can always hope but these conversions really have no meaning in my opinion

Harvard? No way! That’s all Penn Charter education on display!!!

Each stroke has a different factor depending upon how turns affect the race. Backstroke is slower between the walls and so turns lead to a higher factor (3 seconds per 100 for women and 3.5 for men). Fly is faster between the walls so turns actually are less of a factor (2.5 for men 3.0 for women). Breast and free have different factors. 1.093613 is how many yards are in a meter.

Pretty sure Murphy just showed that backstroke isn’t slower between the walls, at least for 15 meters. If he dove, he’d probably be 42.5. Only freestylers — and then only some —- can top that.

Actually, pretty sure that you showed that backstroke is faster (at least underwater) between the walls.

Your conversions are off a bit.

I can explain the formula but I’ve worked on them for years and they are pretty dead on.

Would you mind explaining the formula? Not saying that your conversions are wrong, just curious.

for years? hahahahaha
no but seriously thats a nice formula

The dominance that Murphy has in the back and Dressel has in the 50 free at the collegiate level is unreal. Kind of like Cordes before Licon came along.