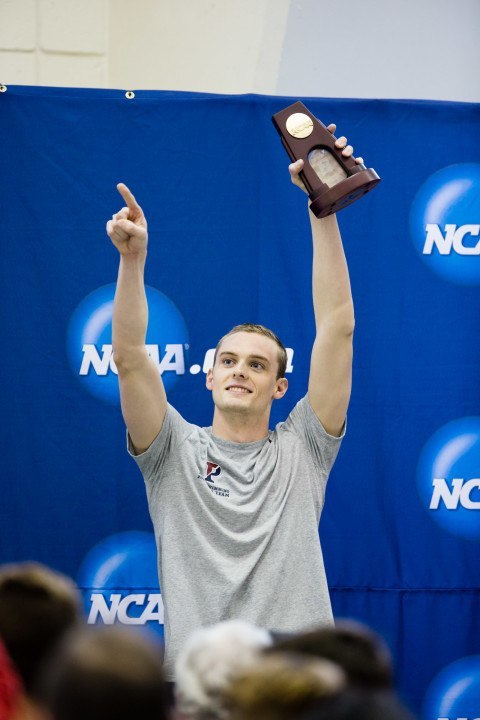 You won't hear any I-told-you-so's from our Pick 'Em entrants about Chris Swanson's 1650 free title. That's because not a soul predicted the Penn senior to win the mile at NCAAs. The full winner pick stats are here. Current photo via Tim Binning/TheSwimPictures.com

So your NCAA Men’s Pick Em entries bombed. You had NC State sweeping the relays, didn’t know who Chris Swanson even was and… well, expecting anyone to beat Texas now looks kind of silly.

Luckily for you, though, today you can find some solace. We’re looking back at the aggregate picks from all 585 contestants to see which events were the biggest locks, and which were the biggest blindsides to this sample of SwimSwam’s reader-base.

Here are the 5 NCAA Champions with the lowest percentage of winner picks:

The aforementioned Swanson runs away with the title of Biggest Upset. The Penn senior wasn’t picked by a single entrant to win the 1650 free, and in fact only made his way into the top 4 on 64 ballots – 11% of all the ballots submitted. That included just 10 second-place votes, 13 third-place picks and 41 fourth-place selections.

Swanson won that 500, and freshman Townley Haas made the list twice, winning the 500 after receiving just 4 winner picks in all. Maybe more impressive was the 200, where Haas earned 38 winner picks (just over 6%) before blasting the fastest swim in history.

The sprint relays were the other major upsets. NC State was widely favored to win the 200 free relay, getting 89.7% of the winner picks. That was the most agreed-upon relay victory heading into the meet, based on Pick ‘Em selections.

But Texas took the event by two tenths, dashing the Pick ‘Em hopes of all but the 10 entrants who picked them.

NC State was also favored to win the 200 medley relay, though by a much smaller margin (48.7% to Florida’s 19.9%). Alabama earned just 12 total winner picks there, finishing outside of the top 4 in winner selections (Texas had 16.2% and Cal 9.9%) but pulled off the major upset win. Cal, Texas and Florida held their own, taking 2nd, 3rd and 4th, resepctively, and NC State fell off all the way to 10th.

Here are the 5 NCAA Champions with the highest percentage of winner picks:

The top 5 locks were all returning NCAA champs, led by a pair of swims each from former Bolles School teammates Caeleb Dressel and Ryan Murphy.

Dressel earned more than 96% of the winner picks in both his sprint freestyle events and didn’t disappoint, setting national records in both. Dressel’s 100 free was the only swim to make the top 5 that wasn’t a defending champ – Dressel had a rough 100 last season after a great 50. In 2016, though, he maintained momentum through both, beating defending champ Kristian Gkolomeev in the 100 and rising as high as 2nd in the 100 fly as well.

Cal’s Murphy has now won three consecutive NCAA titles in both backstrokes, and was a relative lock this season. He had perhaps the most impressive times of any swimmer at NCAAs, taking the American 100 back record well below 44 and the 200 back record under 1:36.

In our pre-meet analysis, it was Dressel, Murphy and Smith who were the biggest locks, but with Smith falling off, his teammate Will Licon jumped into the top 5. Licon had just under 500 winner picks in the 200 breast, a solid vote of confidence considering he was up against Cal’s Josh Prenot, another big name and relative fan favorite.

Here is a full rankdown of each event winner, listed from biggest upset to biggest lock, votes-wise. (The numbers before each winner refer to their pre-meet seed).

There wasn’t a whole lot of team drama heading into the meet, with 92.82% of voters correctly picking Texas to win the meet. California was also pretty heavily favored to take second, though Florida seemed to outperform Pick ‘Em voters’ expectations while NC State dropped a little bit from their expected rank.

Here are the top 5 teams, along with the percentage of voters who predicted them into their correct finishing spot:

I’m amazed that nearly 5% picked Ryan Murphy to lose the 200 back.