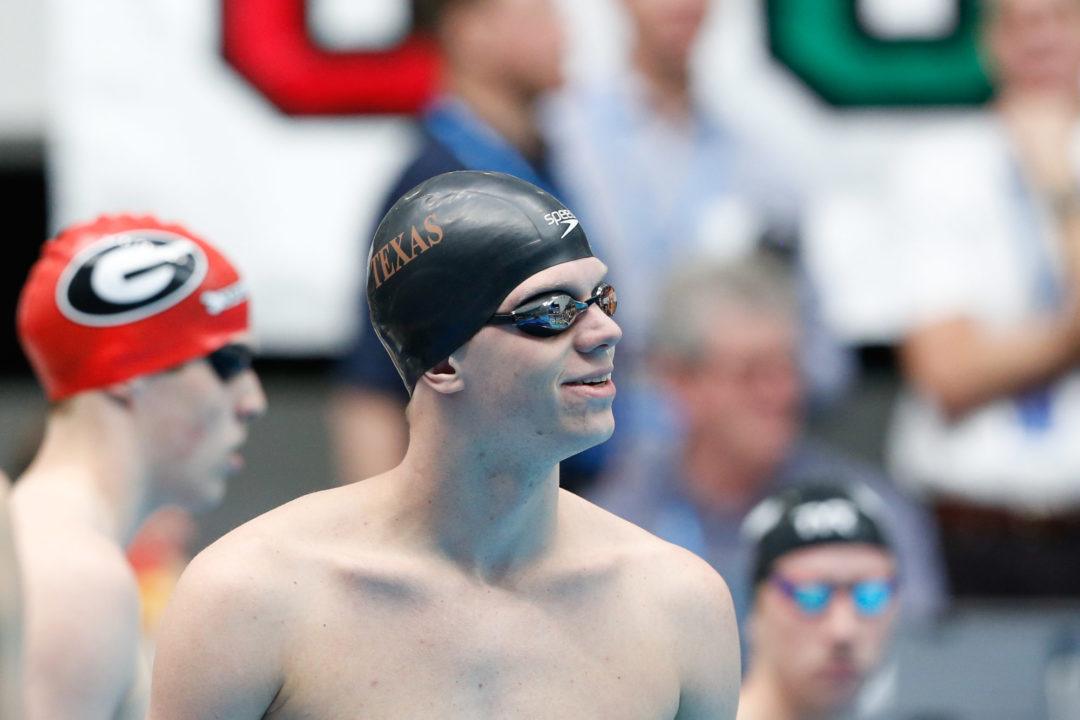 Townley Haas knocked out the 2nd fastest 200 free of all time to defend his NCAA title on night three of the 2017 NCAA men's swimming and diving championships. Current photo via Tim Binning/TheSwimPictures.com

While the 200 free championship final of the 2017 NCAA men’s swimming and diving championships wasn’t quite as crazy as some might have expected, it was still a very exciting race, and Texas sophomore Townley Haas defended his NCAA title, and threw down the 2nd-fastest swim ever, winning with a 1:31.65 on the third night of the NCAA championships.

Haas looked to be a little slow off the blocks, and was about a tenth behind record pace through most of the swim.  While last year Haas jumped off to the lead, surprising the field, this year he was just a bit behind USC junior Dylan Carter at the 50 free, but quickly made up the deficit, and held off Carter and Indiana junior Blake Pieroni to take the win.

Carter and Pieroni, both of whom  lead off the 800 free relay in sub-1:31 swims Wednesday night, couldn’t quite match those times, but they tied in 2nd in 1:31.16, tied for the 5th of all-time, and ahead of Simon Burnett’s 1:31.20 that stood as the US Open record until Haas demolished it last year.

Here’s what we currently have the ten fastest swims ever in this event:

AND HE BEAT DEAN FARRIS!

No, congrats to the The Farris Fanboys for making him a household name in the most hilarious ways. It’s been a gift that keeps on giving. I’m bummed his finished.

That smile…reminds me of myself when I watched Queens a few weeks ago! Go Royals