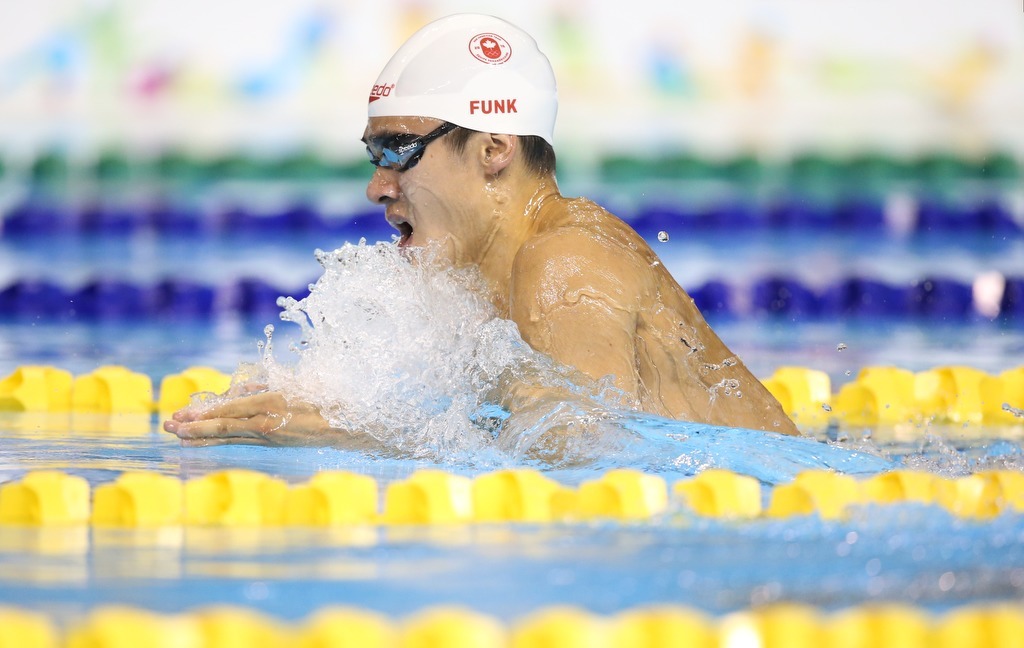 Richard Funk comes into the Olympic Trials as the favorite in both the 100m and 200m breaststroke events. Current photo via Chris Tanouye

Much like Russell Wood in backstroke, Richard Funk has dominated the men’s breaststroke scene in Canada since 2013. After placing 2nd in the 100 breaststroke at the 2012 Olympic Trials (missing the team), Funk has represented Canada at both the 2013 and 2015 World Championships, and the Commonwealth Games and Pan Pacific Championships in 2014. He’ll be the clear favorite in both events as he looks to qualify for his first Olympic team.

Scott Dickens is the only Canadian in history to crack the 1-minute barrier in the 100 breaststroke, but Funk has a good chance of becoming the second either at trials or the Olympics. Funk achieved a personal best of 1:00.26 at the 2015 World Championships in Kazan, a swim that advanced him to the semi-finals. As long as Funk gets under the FINA-A standard of 1:00.57 he shouldn’t have any trouble winning this race and punching his ticket to Rio. Scott Dickens’ Canadian record of 59.85 should also be on high alert.

The only man who looks like he can potentially challenge Funk for the win here is Calgary’s Jason Block. Last August at the Canadian National Championships Block swam his first personal best in this race since the 2012 Olympic Trials (where he placed 3rd behind Dickens and Funk), as he clocked a 1:01.02 for the win. In January Block went 1:01.96 at the Arena Pro Series in Austin, setting him up well for trials. There is a good possibility he and Funk both make the team if they execute in finals and get under the ‘A’ standard.

After Funk and Block there are eight men seeded at 1:02, setting up a very tight race in the final. Seeded 3rd is James Dergousoff at 1:02.21, a time he posted at the 2015 trials finishing 3rd behind Funk and Block. Dergousoff is more suited for the 200, but he’ll certainly be in the race for a top-3 spot here in the 100.

Next up is two-time CIS champion in this event Eli Wall (1:02.34), 2015 CIS champ in the 50 breast Konrad Bald (1:02.44), and 2013 World Championship team member Ashton Baumann (1:02.81). Wall followed up a dominant CIS win a year ago with a disappointing 18th place finish at trials. He finished off the summer strong with a personal best of 1:02.34 at Canadian Nationals in August, and will look to get under the 1:02 barrier here. Bald, like Wall, had a disappointing finish at trials in the 100, placing 17th. He went onto Nationals and scored a personal best as well, placing 3rd in 1:02.44. Known for his front-end speed, Bald will have to shore up the back half of his race in order to contend. Baumann qualified for the 2013 World Championship team in the 200 breaststroke, but hasn’t been a factor on the Canadian scene since. Primarily training and racing in New Zealand, Baumann will seek a spot on his first Olympic team, but will likely have a better shot in the 200.

Notable among the international swimmers competing in this race are recent 400 IM NCAA champion Josh Prenot of the Cal Golden Bears (1:00.66) and his former Cal teammate Chuck Katis (1:01.28), who has won multiple NCAA titles on Cal’s relays. Both are American.

After a massive upset at the 2015 trials where James Dergousoff him out in the men’s 200 breast by two-one-hundredths of a second, Richard Funk was able to redeem himself at the Pan American Games, winning silver in a personal best 2:11.51. Like at trials, Funk struggled in this event in Kazan at the World Championships, going 2:13.33 (he was 2:13.13 at trials). The 100 has typically been Funk’s stronger event, thus making him more vulnerable in the 200. He did suffer defeat at the 2015 trials and tied for the win at the 2013 trials, but has consistently dropped time each of the past two summers and will no doubt be on his game next week. Provided he doesn’t die in the last 50 (which has happened before), he’s the clear favorite for the top spot. He’ll have to hustle and be right on or better than his personal best if he wants to get under the FINA-A standard of 2:11.66.

The two men who have challenged Funk at the past two World Championship trials are Ashton Baumann and James Dergousoff. In 2013 Funk faltered the last 50m, opening the door for Baumann as he closed hard. They tied for the win in 2:14.84, and Funk ultimately withdrew from the required swim-off to give Baumann a spot on the team after Funk had already qualified in the 100. Baumann has been off the Canadian scene for a while, but did swim a personal best of 2:13.44 in December, making him a wild card here at the trials. He is the 5th seeded Canadian.

Like Baumann did in 2013, James Dergousoff closed on Funk at the 2015 trials in the final 50, ultimately beating him 2:13.11 to 2:13.13. With that swim Dergousoff qualified for the Pan Am Games, giving him some valuable international experience. Despite not performing how he’d like to there (he was 11th in 2:15.31), Dergousoff comes into these trials with much more experience under his belt than he did a year ago. After dropping two seconds at trials last year, he’ll need to chop off two more to have a shot at his first Olympic team. Dergousoff is seeded 4th among Canadians.

After finishing 4th and 5th at the trials in April of 2015, both Eli Wall and Jason Block had breakout swims in the 200m breaststroke at the National Championships in August, taking off over a second each to finsih 1-2. Block won in 2:12.87, while Wall wasn’t far behind in 2:12.97. Despite not a lot of international experience between the two of them, both put their names on the radar in this event after that performance.

Also knocking on the door is James Guest, who is seeded 6th in 2:14.11. Guest was 3rd at the 2015 trials behind Dergousoff and Funk, but struggled at Nationals placing 7th. After completing his first year of school swimming in the NCAA for Georgia, it will be interesting to see what kind of strides Guest has made in long course. He managed to qualify for the NCAA Championships in his freshman year, finishing 36th in the 100 and 23rd in the 200 breast.

It looks like Funk’s race right now, but with Jason Block posting lifetime bests for the first time since the 2012 Olympic Trials last August, he’s certainly one to watch out for. As is Eli Wall after his breakout swim at the end of the summer, and both Dergousoff and Baumann have proved themselves already on the national trials stage.