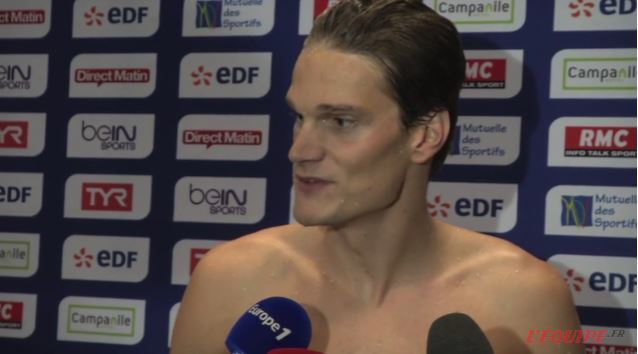 Yannick Agnel spoke to reporters after finishing seventh in the 100 meters freestyle on Friday night with 49.14 and missing...

Yannick Agnel spoke to reporters after finishing seventh in the 100 meters freestyle on Friday night with 49.14 and missing out on a chance to defend his Olympic title in the 200 following a controversial final on Wednesday.

Agnel appeared a bit defeated, and acknowledged he’d had a couple of difficult years. “I’ve tried to come back, little by little… that 100 was complicated. I just wanted to give it my all. I have no regrets, and that’s what matters tonight. In any case they had a great race up front. Jeremy was monstrous. I’ll think I’ll watch it again later, it was a little hard to see from the outside, with fogged-up googles, from out in lane 8, but congratulations to them. It proves you have to work twice as hard.”

When asked if he felt sad, he said, “A little. I trained hard every day. I did what I needed to do in order to be at the top, and as it happens, I wasn’t. On the one hand I have no regrets because I know when I swim I give it all I have. On the other hand it’s hard not being at the same level as before. It’s complicated but, as I’ve said before, I’ve been through so much over the last four years. Choices I do not regret at all because they brought me good things, but athletically, it’s more difficult. I’m feeling old (laughs).”

The reporters then asked if he would retire after Rio, to which he answered: “I don’t know. Probably. We’ll see what happens. In any case it’s not something I’m going to announce right now.”

Here is the interview in French:

Honestly heartbreaking to see Yannick in this state was so looking forward to watching him during the Olympics. I can understand he’s had a hard couple of years the offer of training with Bowman was too good to turn down but the old saying of why fix what’s not broken truly applies here. With the unfortunate passing of Muffat who I’m sure he was good friends with , I think he needs a break after Rio and come back when whatever is holding him back is dealt with. An honourable young man a true champion for the sake of himself and French swimming can only hope he comes back in the future stronger

Back to Agnel, my only hope is that he can close his career in the best way possible in the 4X200 free relay.

Maybe I’m the only one on swimswam who believes in that relay.
Agnel/Pothain/Stravius, it’s top level. The question is the 4th swimmer. Mignon or Bourelly?
If I can give the US team some advice: don’t swim the final in the lane next to France. And don’t put Lochte on the anchor leg!
If Stravius starts 1 second behind Lochte on the anchor leg, I know who will touch first at the end. 🙂
I know Australia and GB will be contenders too but I really hope a USA/France battle for gold.
And… Read more »

MP has admitted he was not fit (or mentally engaged) for London — yet he still went 1:53.0 fly and came back in the same session to split 1:44 on the relay. He’s more fit now. MP will be on the 800 FR and will throw down with the best of them.

He’s such an amazing talent. I wish him well.

Why so many of you write Angel instead of Agnel? 😆
And Manadou instead of Manaudou? 😆

Someone posted on another article that Bob Bowman broke Agnel. Is that true?

He’s mentally burned out and frustrated. I hope he steps away for a year and comes back. Recharge the batteries, enjoy a break. Please don’t retire!

I love Angel! Hard to believe a 23 year old who went a 143.1 in textile is now over the hill. He looks unhealthy and exhausted. A bigger problem behind the scenes for sure. Regardless, he certainly is a tremendous swimmer and champion.

Perhaps he is chronically over trained. I have no inside knowledge at all, just a thought. Mid-range aerobic swimmers like Agnel are pushed very hard in training, being a cross between a sprinter and a long distance swimmer. They train aerobically, but also massive amounts of anaerobic lactate work which is hard on the body. Maybe he just needs a year off. The idea that he is “old” is nonsense, there is some problem that hopefully can be addressed if he wants to continue his professional career.

I believe this was part of the problem when he was training with NBAC in America. I believe that when he returned to France he referenced that and it seemed was back to the training he’d been doing, so I’m not sure.

As far as retirement, I hope he finds that desire again. The magic might not be there right now, but I still believe that if he can find a little spark to keep him going, Agnel could do amazing things in the 100 and 200 one day.