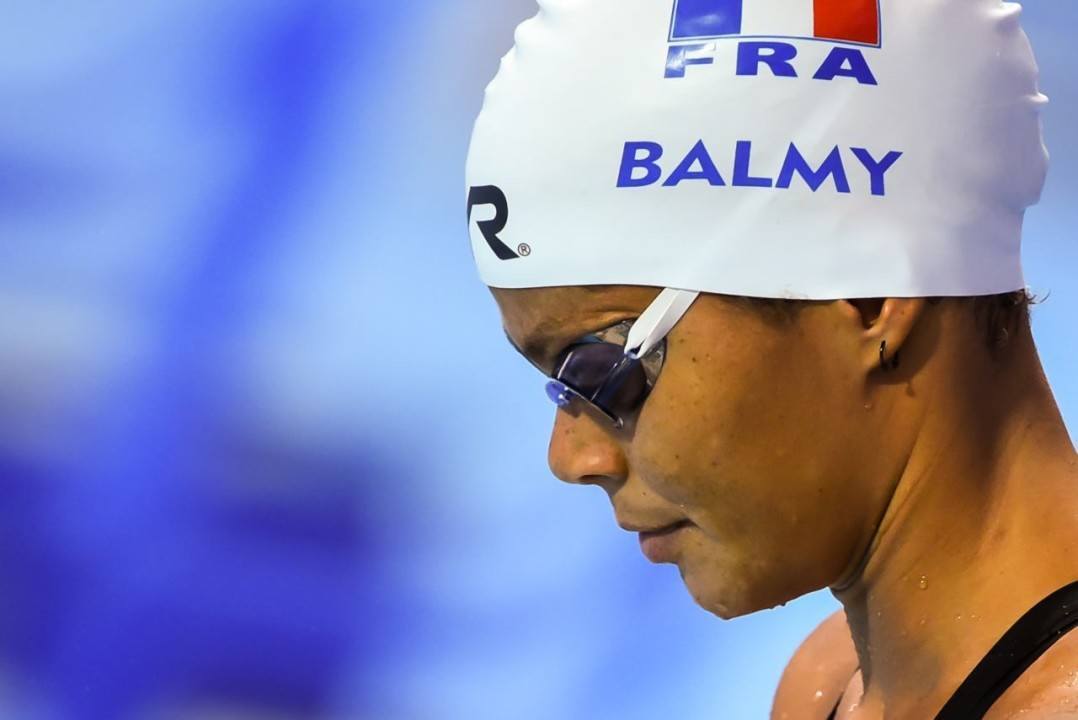 Coralie Balmy leads the French women with one automatic and two complementary events for Rio at the conclusion of the 2016 French Elite Nationals. Archive photo via Peter Sukenik/www.petersukenik.com

Now that the 2016 French Elite Nationals and Olympic Selection meet has concluded, there is a good deal of conjecture about who exactly will represent France at the 2016 Olympic Games in Rio de Janeiro.

There has been quite a bit of discussion all week, among SwimSwam readers, but primarily in France, about the French Federation (FFN)’s tough qualifying criteria for Rio. Using the “build it and they will come” Field of Dreams philosophy, the FFN set standards that, should they be met, would allow them to constitute a team with better chances of medaling in Rio. This came about partially in response to an underwhelming performance, especially by the French women, at World Championships in Kazan.

As we noted when we published the Rio times that the FFN released last September, national women’s team director Fabrice Pellerin lamented in a post-Kazan interview with Agence France-Presse that the French women seemed satisfied just swimming in semi-finals; they weren’t up to their international counterparts in putting together the big swims that would put them in finals. Charlotte Bonnet, who had won everything at French Elite Nationals last April and was the hope of the French women’s team, didn’t make one final in Kazan, for example. The men, on the other hand, earned six medals in Kazan.

The FFN gave itself a very small back door, however, by announcing that the National Technical Director (DTN), Jacques Lefavre, would have the discretion at the end of the meet to add up to 6 men and 6 women to the roster, based on how close their swims were to the French standards, as long as they had achieved FINA A times.

Consideration list (FINA A swims, in order of nearness to French standard):

Having already qualified for individual events, both Coralie Balmy and Charlotte Bonnet are eligible to add complementary events, as long as they achieve the FINA A standards. Balmy, then, could swim both the 200 and 800 frees in Rio, while Bonnet could add the 100 free. She could not, however, swim the 100 breast, as she failed to achieve a FINA A cut.

That puts Anna Santamans and Béryl Gastaldello at the top of the list. And yet they both already qualify through the 400 free relay. It’s unclear whether or not their names would take up two spaces on “The List of 6.” Lara Grangeon’s 400 IM, Marie Wattel’s 100 fly, Fantine Lesaffre’s 400 IM, and Mélanie Henique’s 50 free would be next in line for entry in individual events based on Montpellier.

On the one hand, the women’s side is much easier to predict because only eight women total swam to FINA A time standards. On the other hand, they all have another chance to make the cuts to qualify for relays at the European Championships next month.

You can play with your own scenarii below:

The relay girls shouldn’t need saving, as they are already going. The 6 ‘saved’ appears to relate to athletes not already on the team.

I think they need to save Deberghes. Bonnet could also swim breast in the medley relay, but then Gastaldello would need to swim free and someone else would need to swim back, so in my opinion the medley relay should be:
Gastaldello, Deberghes, Wattel, Bonnet
Fabre should be part of womens 4 x 200 free relay? Wattel (medley) and Deberghes (medley) actually as well …
I all the relay swimmers will be safed anyway, then there wont be enough other swimmers with the A cut who could be safed.

If relay swimmers also need to be safed, then they would have to safe Gastaldello (medley and 400 free relay), Santamans (400 free relay), Wattel (medley relay), Deberghes… Read more »