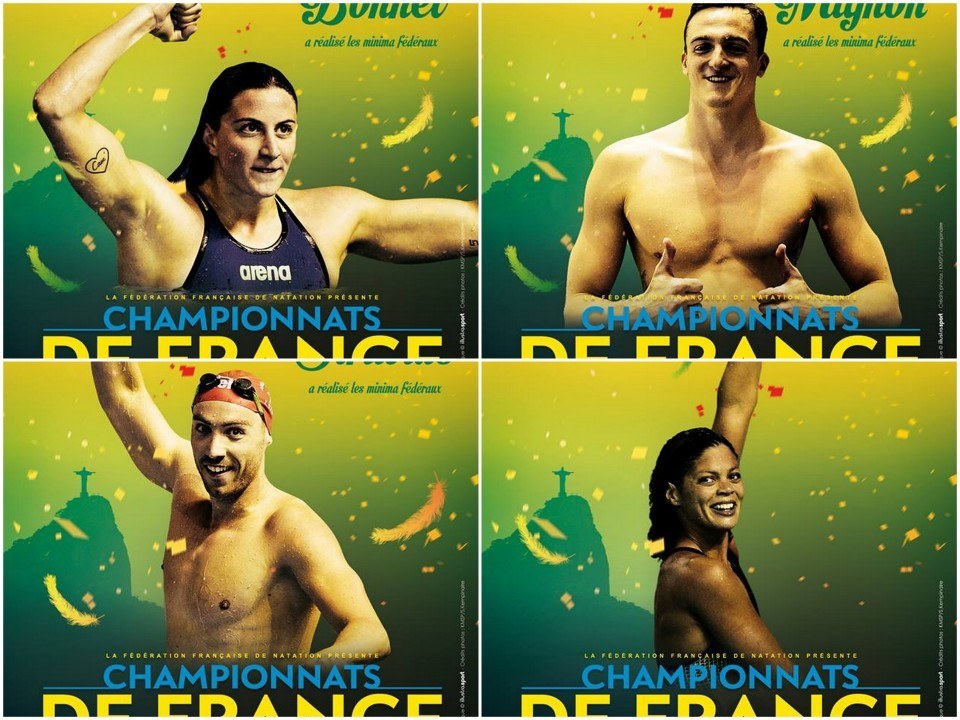 It's Day 5 of 2015 French Elite Nationals and Olympic Trials and Camille Lacourt, Damien Joly, and Lara Grangeon are all hoping to see their own Rio posters at the end of the night. Current photo via FFN

Top-seeded Coralie Balmy swam an even 4:13/4:15 to win the opening event of Day 5 in 8:28.63, taking a little bite out of her seed time. Balmy’s coach in Antibes, French 200 fly record-holder Franck Esposito, had announced she would just be swimming to win, not to pick up a second Rio qualification cut. He wanted her to go 4:13/4:16, which she beat by a second. Balmy finished nearly a full pool length ahead of the field. Had she been going for the 8:24 she would have had no one but the clock to pace her.

Belgium’s Eva Bonnet beat her seed time by 6.2 seconds and finished second in 8:40.93. Ophélie-Cyrielle Etienne, of Lille Métropole/Marseille, was third in 8:43.67.

Nice’s Alizée Morel dropped 2.4 seconds and finished fourth with 8:46.84, ahead of Mulhouse’s Julie Berthier (8:48.12). Léa Marchal of Besançon was sixth in 8:48.99, a personal best by 3.1 seconds. Marion Abert of Dauphins Toulouse, who dropped 4.1 seconds in the afternoon heats, slipped into the top eight with 8:50.57 for seventh. Oceane Cassignol of Montpellier Métropole took eighth with a personal-best 8:53.07.

Top-seeded Jordan Pothain of Nautic Club Alp’38, swimming in Lane 3, led wire-to-wire in an attempt to earn a ticket to Rio. While he went a lifetime best and won by 3 seconds, Pothain came 1.1 seconds short of the standard. Out in 1:51 at the 200, he came home in 1:56 for 3:47.77. Pothain has had an excellent week, now culminating in a national title. While he didn’t make the Rio cut, Pothain is now closer to the French standard in the 400 than his controversial second-place finish in the 200. This performance could actually make things easier to pick up both Pothain in the 400 and Yannick Agnel in the 200 free when he analyzes the post-meet data. As we have mentioned before, the National Technical Director, Jacques Favre, may select up to 6 women and 6 men to add to the roster, based on the percentage of how close they swam to the Rio cuts. You can see our ongoing list of performances by percentage here. (The closest swims so far are, in order: Stravius 200 free, Joly 1500 free, Coelho 200 fly, Pothain 400 free, Pothain 200 free, Agnel 200 free, and D’Oriano 1500 free.)

Damien Joly of Antibes was second to the wall in 3:50.84, 2 seconds over his seed time. Joris Bouchaut of Dauphins Toulouse was also just off his best, coming in third at 3:51.69.

After the top three there was a pause, then came two waves of finishers. Benoît Debast of Sarcelles edged Jonathan Atsu of Dauphins Toulouse, 3:55.21 to 3:55.97 for fourth. Atsu had dropped 3 seconds in prelims to make the A final, and took another second off his 3:59 seed time in finals to finish with a new personal best.

Lara Grangeon of Calédoniens/Font-Romeu has had an outstanding meet. No question. Three national titles. Three personal bests. One national record. The only thing missing is an automatic qualification for Rio. Amid all the pressure, Grangeon has remained cheerful and optimistic all week and has continued to perform at peak form. Châpeau, as they say.

Grangeon’s third title and third PB came with a 2:12.68 victory over Mulhouse’s Fantine Lesaffre, who also notched a best time with 2:13.98. It’s worth pointing out that both women met the FINA A standard with their swims, but what is difficult about the French standards for Rio is that they are still miles away in terms of percentage calculation, which is what the DTN will be using when choosing who will be added to the list. Nonetheless both women had excellent races and come away with new times. A bittersweet reward.

Cyrielle Duhamel of Stade Béthune Pélican Club, who broke the national age group record for 16-year-olds in the 400 IM, improved her personal best by a full second with her third-place finish of 2:16.06. Adeline Martin from CN Antibes was fourth in 2:18.42. Alice Aubry of SN Metz clocked a personal-best 2:18.47 for fifth. Coralie Codevelle of Sarcelles Natation went a best-by-1.1 2: 18.50 for sixth; 30-year-old Sophie De Ronchi Turban of CNS Vallauris also improved her seed time by 1.1 to finish seventh in 2:19.48. 14-year-old Romanian Claudia Gadea finished eighth with 2:20.44, a personal best by 3/10.

After a very difficult week, Camille Lacourt of Marseille showed why he is a World Champion by coming through with two clutch swims in the 100 back on the day that mattered. Lacourt had struggled all week, trying to prepare himself for this race. He had admitted to the press that he wasn’t in top form; he had lost 5 kilos inexplicably in March and was trying to gain it back. Although he won the 50 back on Wednesday, he was very unhappy with the time. So he swam a practice 100 in the 200 back (after advising everyone else in the heat of his intentions), going full-out but only managing a 55. Then came prelims this morning and Lacourt clocked a 53.93 that elicited a collective sigh of relief from all corners of the Antigone pool.

Knowing it was just himself and the clock, Lacourt went out in 25.61, a good 4/10 ahead of his morning pace, and came home in 27.36 to clench the victory and punch his ticket to Rio. Lacourt’s Marseille teammate Benjamin Stasiulis was just off his seed time but nonetheless finished second in 54.44, ahead of Amiens’ Eddie Moueddene, runner-up to Lacourt in the 50 back on Wednesday, who went 54.89.

Thomas Avetand of Beauvaisis/Amiens improved another 3/10 to finish fourth in 55.13, making for a personal best by .60 between prelims and finals. After just sneaking into the A final with the eighth time of the morning, Avignon’s Oleg Garasymovytch placed fifth in finals with 56.39.

Stanislas Huille of SN Versailles/Paris INSEP continued to impress with another national age group record for 17-year-old boys. After dropping 1.2 seconds in prelims and setting the NAG with 56.45, Huille tied his morning swim with another 56.45 in finals for sixth place. Paul-Gabriel Bedel of Marseille went 56.71 for seventh, just ahead of Thibault Delecluse of Gravelines Natation (56.79).

Charlotte Bonnet – She is very broad.

That poster may be completely misleading, but did anyone else notice that the woman on the top left is built like one of the juiced DDR women of old? Just sayin’.

This up-vote, down-vote phenomenon is much more interesting than this meet.

Surely we can crack the 100 mark for a non-Bobo upvote and a Bobo down-vote. Come on. Let your competitive spirit show.

Bobo, you might have to take one for the team and say something to really piss people off so we can hit the magic 100 mark.

This up and down votes phenomenon is hilarious. And by the way, I found your les Miserables joke is funny and as a Frenchman I’m not insulted at all 🙂

Gina, congratulations, and I’m not surprised. If anyone could do it, it would be you.

when will they announce their additional picks and will be be an exact science or will politics be involved?

They had always said it would be strictly by the numbers (we’re keeping track of those numbers here, by the way http://swimswam.com/french-qualifiers-rio-ranking-possible-selections/ – you can go to the Men tab or the Women tab and sort % in descending order to see who’s in line for “repêchage,” or throwing a line to, if you will), but I know for a fact that there was a very long (90+ minutes) meeting to discuss the situation last night, so there might be more discretion in the process than previously alluded to. We’ll know more on Wednesday…

Bobo, why is there no results for the Finals of the Men’s & Women’s 50 Butterfly events? The award ceremonies are listed on the timelines, but the events & results are not listed.

Brad, I know you are asking Bobo but it’s 11:30 pm in France so people are just sitting down for supper. Just kidding. Still, I’ll answer if you don’t mind. The non-Olympic events (50 back, 50 breast, 50 fly, and non-Olympic distance) were offered at this meet, but only as timed finals. They take place in the morning session as part of prelims, between the A and B flights. The awards (the winners, after all, are national champions) are handed out at the start of that night’s finals session. Tomorrow’s 50 breasts will run at approximately 9:30 am; the podium ceremonies will take place prior to the women’s 200 back final.

Tea Rex, here’s what I understand. And maybe I’m reading it wrong, but in the “Selection Criteria 2015-16” document put out by the FFN, it seems to say that a selected athlete can swim complementary events if: 1/either zero or one swimmer (ie, less than 2) has qualified for that event and 2/the swimmer has met the FINA A standard for that event either in Montpellier or at European Championships in May.

So, unless I am missing something, Coralie Balmy is eligible for both the 200 and 800 (in addition to the 400 for which she qualified outright), as neither is “full” and she made FINA A cuts in both of them at Montpellier.

Great race by Lacourt in the clutch. I had seen Pothain in the 200 and was impressed (I dont follow French swimming closely) and thought he would be the one to watch in the 400. Now, I say he is the one to watch, period: for me, the revelation of these championships.

Will Pothain be saved for the 400 and give his place to Agnel in the 200? I think it would be fair as Agnel clearly was ahead in the 200 and Pothain himself said he thought so. Would Agnel break 1’46” in Rio? As Yogi Berra said of baseball, “it is 90% mental and the other half is physical”.

Bobo … Do you know what happened for Ophelie CE in the 200free ? Well she swam 2,01,8 in the heat thinking that it could have been enough … But no she was in final B ans by the way didn’t swim it. However she’s already done a 1,59.07 this year … So disappointing for the relay …. What happened ?

Who keeps thumbing down bobo? I personally love his insight and vast knowledge of the sport.

OK, stupid question, but as an infrequent commenter, what is an ‘up’ or ‘down’ vote supposed to mean? Seanswimmer gets 80 upvotes for asking a question above. No offense to Seanswimmer, but what’s up with that?