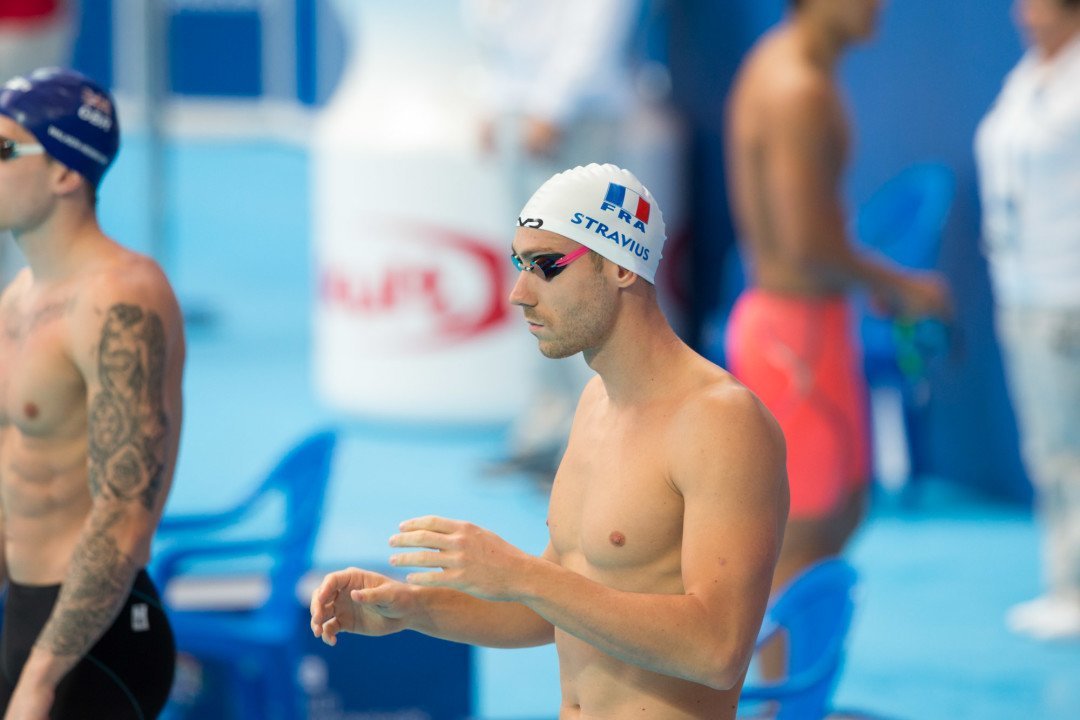 Jérémy Stravius emerged as the most prolific qualifier for individual events for Rio at the conclusion of the 2016 French Elite Nationals and Olympic Trials in Montpellier. Archive photo via Tim Binning/TheSwimPictures.com

See our analysis of the French women’s selection for Rio here.

With the conclusion of the six-day French Elite Nationals and Olympic Selection meet in Montpellier, it is time for the French Federation (FFN)’s National Technical Director (DTN), Jacques Lefavre, to get to work putting together the team that will represent France at the 2016 Olympic Games in Rio de Janeiro, Brazil.

The French minima for qualification to Rio have been discussed ad nauseam all week, both on SwimSwam and throughout France. As we have mentioned before, the FFN used a “build it and they will come” Field of Dreams philosophy when setting their standards for Rio, hoping to encourage their athletes to meet an elevated level that would allow them to medal at the Olympics. It galvanized Jérémy Stravius, the former World Champion 100 backstroker who stunned everyone by winning the 100 free, 200 free, and 100 fly with lifetime bests in each event. For most of the other swimmers it produced no small amount of anxiety, and there were some noticeable big misses during the championships.

As a reminder, the DTN has the discretion to add up to 6 men and 6 women to the Rio roster, based on how close the athletes’ swims were to the French standards, and as long as they achieved FINA A times.

Consideration list (FINA A swims, in order of nearness to French standard):

Here’s where it gets complicated.

Stravius and Clément Mignon both have the right to swim complementary events for which they have made FINA A standards, since they qualified outright in at least one individual event. But Mignon was third in the 50 free, behind Florent Manaudou and Frédérick Bousquet. That said, Bousquet has no other way of making the roster if he is not chosen by the DTN to “List of 6.” That brings up the interesting question of whether or not there would be a shuffle to allow Manaudou to swim the 100 free; I’ll go out on a limb and say I strongly doubt it. Manaudou seems quite content focusing on defending his title in the 50 free without any other distractions. He knows this race like the back of his hand, and he would like to spend the next four months perfecting all 21 seconds of his race.

Moving down the list, Damien Joly (1500 free), Jordan Coelho (200 fly), Mehdy Metella (100 fly), and Jordan Pothain (400 free) look like shoe-ins. If Pothain, who is also in line for the 200 free after the bizarre timing mishap that pushed Yannick Agnel out of contention for the top two slots, were to concentrate on the 400 and forego the 200, Agnel would be next on the list. And frankly, the only other non-relay FINA A swims belong to Nicolas D’Oriano (1500 free) and Bousquet (50 free). It’s hard not seeing everyone making “The List.”

As we pointed out in the women’s analysis, things are further complicated by the fact that French athletes can still qualify for the Rio relay roster by achieving FINA A cuts at the European Championships next month. Giacomo Perez Dortona, for one, could help qualify the 4×100 medley relay if he makes the cut; otherwise there may not be a medley relay.

Jacques Favre has made it clear that he will announce the roster at 4 pm on Wednesday, April 6.

So you can’t film a race with a phone at French Olympics Trials or people prefer just not to do it?

Pretty sure you can film. You just can’t post it if someone has the broadcast rights and hasn’t granted permission.

ThomasLurzFan, yes, but maybe someone can film a race from the stands in the pool and post it on youtube.

Not the best quality but that’s the only video I’ve found.
That’s really 10000 times much more difficult to find a race video from French nationals than in any other country!
Bein Sports has blocked everything.

I dont think so …
German nationals for example arent broadcasted on the first two days, so you wont find any race video …

Iain, I understand well what you mean.
And it’s mentioned here.
Part 4
http://ffn.extranat.fr/html/dossiers/1045.pdf

But why for every race with swimmers already qualified in an other event, TV commentators, athletes and coaches have talked about the high standards and the possibility of repechage? 😆

What you say is clearly written above. It can happen if one of two spots remain in an event and if you swam the A standards in that event either at French nationals or at European championships.

I find that rule absolutely stupid.

It only adds even more complexity to an already very complex system.

Only people who went to Stanford or Harvard can understand that qualifying system.

Philippe Lucas is strongly opposed to any idea of repechage.
Simplicity. And tolerance zero!
We would have sent 6 swimmers to swim in individual in Rio. 😆

Barnier said yesterday he was inspired by the British system and tried to adapt it in France with a long term view in term of overall performance improvement.

I thought the system four years ago, with minima for heats, semis, and finals, was pretty convoluted. This one is clear, but so unattainable that it just seems discouraging. What’s confusing is to say, “okay kids, clean up your room and we’ll go on a family bike ride. Then an hour later: Let’s see, you put your books back on the shelves but you didn’t make your beds or put your clothes away. Oh well. Nice effort. Go get your bikes.”

Metella, Pothain etc. don’t need to be ‘saved’ as they are already on the team.

I think it’s not just whether or not they will be on the plane, but what they will swim when they get there. Even those who qualify for relays are not guaranteed an individual swim unless the DTN uses his discretion to make that happen.