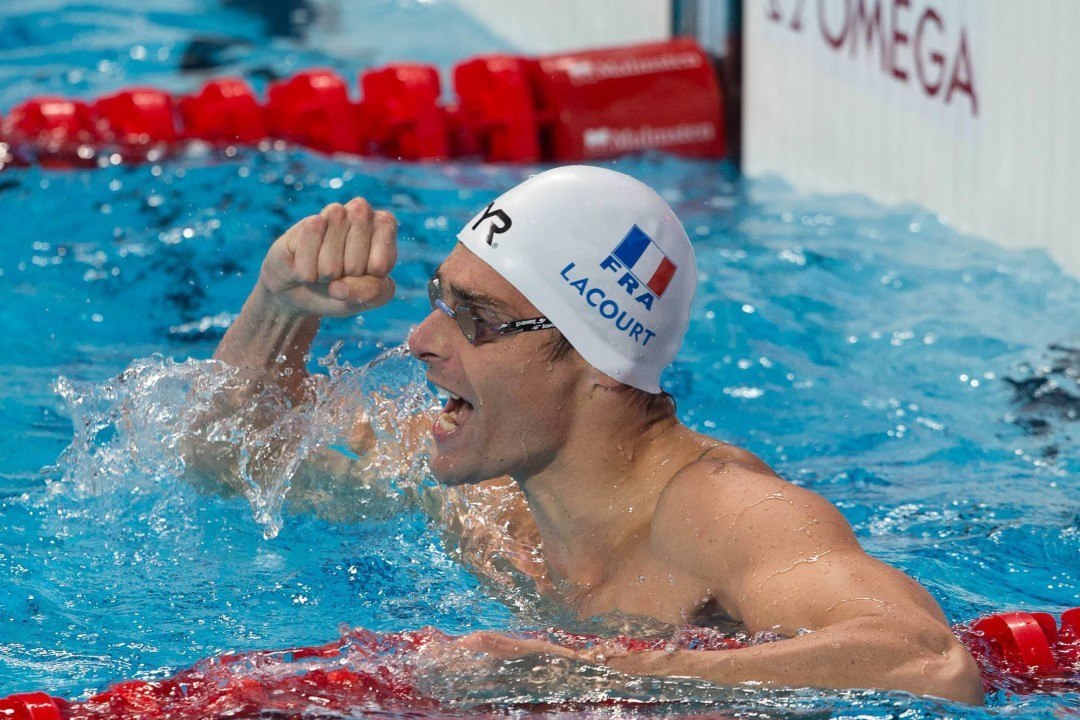 Camille Lacourt is the top seed in the men's 100 back on Day 5 of 2015 French Elite Nationals and Olympic Trials. Archive photo via Tim Binning/TheSwimPictures.com

The fifth morning began with a hit-or-miss 400 free for the men. In the absence of Yannick Agnel, who scratched the event, the top three seeds came in together with qualifying times in the 3:52s. Damien Joly of CN Antibes led the way with 3:52.20, 3.4 seconds off his best. Joris Bouchaut of Dauphins Toulouse put up a very strong 3:52.61, only 1.6 away from his seed time. Top-seeded Jordan Pothain went an easy 3:53.21, adding 4.7 seconds. The three will occupy the middle lanes of the pool tonight and it wouldn’t be over-optimistic to expect at least one Rio qualifier out of the bunch. There isn’t the kind of depth in every event here in Montpellier that makes for a good battle in finals, but it is the case in the men’s 400 free. If they all push each other the crowd could have another reason to celebrate tonight.

Teammates Benoît Debast (3:55.70) and Anthony Pannier (356.36) of Sarcelles Natation had solid morning performances, landing them in the A final tonight. Simon Guerin of Amiens Métropole clocked a near-best time of 3:57.76 to jump from 14th seed to sixth overall. Rahiti De Vos of Olympic Nice also made a move into the top eight with 3:58.08, just 2.3 off his entry time. The last lane of the A final, barring any faster swims out of the B Flight, will be occupied by Benjamin Brantu of Vikings de Rouen, who went 3:58.15, a mere 4/10 off his lifetime best.

Béryl Gastaldello scratched the 200 IM and the 50 fly in order to concentrate on tomorrow’s 100 free, her last chance to secure a bid for Rio. That left Lara Grangeon of Calédoniens/Font-Romeu and Fantine Lesaffre of Mulhouse, the only two who have already been at or near FINA standards, to challenge each other in the final. That said, the difference between the FINA A cut and what the FFN deemed Rio-worthy is enormous and probably beyond what two evenly-matched competitors can push each other to do.

Adeline Martin from CN Antibes went right at her seed time and qualified fourth in 2:18.65. Coralie Codevelle of Sarcelles Natation and Sophie De Ronchi Turban of CNS Vallauris each took 8/10 off their seed times. Martin was fifth in 2:18.85; De Ronchi Turban, sixth in 2:19.69.

Alice Aubry of SN Metz qualified seventh with a near-best 2:19.75, while 14-year-old Romanian Claudia Gadea took the eighth spot with 2:21.71.

Laura Paquit of ASPTT Limoges, the French champion in the 200 breast, added 9.2 seconds to finish 26th with 2:28.52, almost exactly the same time with which she won the 200 breast.

OUF! The sigh of relief echoed throughout the Antigone pool on Saturday morning when Marseille’s Camille Lacourt put up a 53.93 to lead the morning qualifiers in the 100 back. To be perfectly honest, this was the race that most worried French swimming fans. The scuttle from the pool deck was that Lacourt was struggling this week. He had admitted to the press that he wasn’t in top form; he had lost weight inexplicably in March and was doing everything he could to ready himself for this race. Lacourt swam the 50 back on Wednesday, and was very disappointed with his time. He then did a “practice” 100 in prelims of the 200 back on Thursday, clocking a mere 55 before drawing a DNF (“Did Not Finish”) disqualification code. Things were not looking good for Saturday. But the World Champion drew together his resources and popped a 53.93 that will place him in lane 4 tonight. Though certainly not his best, it was significantly below the FINA A standard and faster than his three showings in the 2016 Golden Tour (54.84-54.34-54.91), and should boost his confidence going into tonight’s final.

Lacourt’s Marseille teammate, Benjamin Stasiulis, qualified second through to finals with 54.87, just 7/10 off his seed time. Thomas Avetand of Beauvaisis/Amiens went 55.37, bettering his seed time by .36 for the third-fastest performance of the morning. Amiens’ Eddie Moueddene, runner-up to Lacourt in the 50 back on Wednesday, qualified fourth in 55.58.

Thibault Delecluse of Gravelines Natation came within 2/10 of his seed time with a fifth-place 56.17. Stanislas Huille of SN Versailles/Paris INSEP had the performance of the morning; he dropped 1.2 seconds to break the national age group record for 17-year-old boys, and qualified sixth with 56.45. Marseille’s Paul-Gabriel Bedel (56.48) and Avignon’s Oleg Garasymovytch (56.56) rounded out the top eight.

“I’ve been chasing it for five years!” exclaimed a relieved Mélanie Henique (Amiens/Marseille) when she broke the French national record, lowering her own mark from Shanghai’s 2011 World Championships by .02 with 25.84. The sprint fly is Henique’s specialty, but given that it is not an Olympic event, she has been training mostly freestyle with her coaches in Marseille this past year. Her victory and record this morning were thus doubly sweet. Defending champion Gastaldello, who represents Marseille, finished second in 26.49, well off her winning 25.92 from a year ago.

Marie Wattel of Nice edged her teammate Anna Santamans, 27.03 to 26.07 for the bronze medal.

With top seed Florent Manaudou and French record-holder Frédérick Bousquet of Marseille scratched to focus on tomorrow’s 50 free, their teammate, third-seeded Mehdy Metella, was next in line for the throne. Metella pushed through and got the win, but he was challenged the entire way. Metella touched in 24.29, ahead of Paul Pijulet of Dauphins Toulouse (24.32) and Anthonny Ralefy of Madagascar, who trains in Marseille (24.37).

Yonel Govindin of Dauphins Toulouse, who placed third last year behind Manaudou and Bousquet, was .02 off the podium with his fourth-place 24.39. EMS Bron’s Nosy Pélagie and Vanves/Antibes’ Jordan Coelho tied for fifth in 24.49. Florian Truchot of ASPTT Orléans dropped .34 to edge Paul Lemaire of Dauphins Toulouse, 24.52 to 24.53, for seventh.

All but the top eight swimmers, who will open tonight’s finals, swam throughout the afternoon. With the scratch of #5 seed Margaux Verger Gourson, Marion Abert of Dauphins Toulouse, Camille Wishaupt of Mulhouse, and Caroline Jouisse of Aquatic Club Bourges were expected to lead the field, as they alone came in with sub-9:00 seed times. Abert posted the top time, dopping 4.1 seconds and going 8:50.57. Wishaupt was just under her entered time, notching the second-fastest morning time of 8:54.38. Jouisse, too, went a best time with 8:57.69.

I think that Pothain is a swimmer to watch in the 400. I saw the final of the 200 and was amazed that he basically didn’t kick until the last 25.

I’m correcting what I’ve mentioned above about the 50 fly and back races. They were not prelims but timed finals.

By the way I wonder why there are no semifinals this week unlike the US and Australian trials.

I suspect that if they did the swimmers would be that much more tired and would have even less chances to make the minima.

I believe that’s what they need to qualify automatically – the team could still be ‘saved’. As I demonstrated on the thread for last night’s finals, this is entirely possible, indeed probable. They already have a free leg and Metella, who will swim fly, qualified. Lacourt may or may not, but he would be saved anyway, so it’s only the breaststroker whose spot would be close. However, there is no-one to push him out, and I’m pretty sure the relay would take precedence anyway over someone who will finish well down the field in whatever event.

What about the medley relay? Is it true that they would send a team only if everyone hit fina A?

I found this cam. video of 100 free finals on youtube, it’s awful quality. That’s all there is out there for now.

He only breathed every fourth stroke. That’s probably not enough for his anatomy. At the end he was forced to breath every second stroke and you can see how he loses his technique.

Hard to tell but it looked as though stravius was over the 15 marker on the start. A better quality video would probably clear that up

I am almost 100% sure Jordan will win the 400 free and SMASH the qualifying time. Judging from his 200 free improvement, which is not his best event, I can feel a 3:45 coming.

Les Miserables. Perhaps they are good at singing .