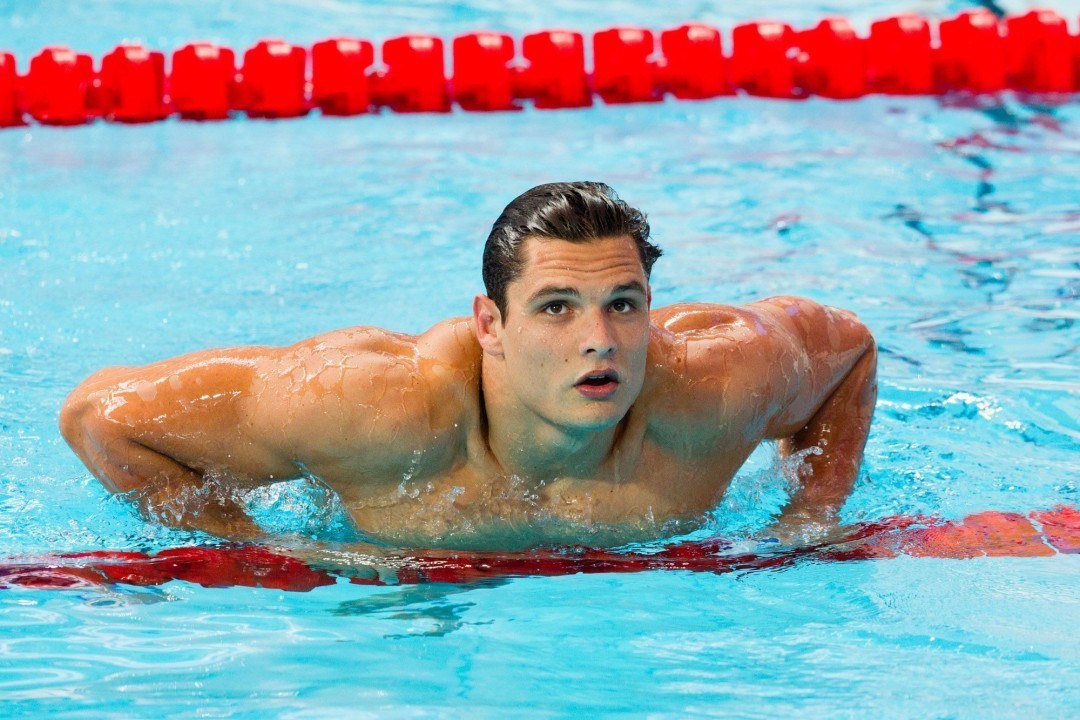 “I knew I took it out too fast. I was thinking, ‘I hope they won’t come back too fast’ and… well, it was a good 75.” Archive photo via Tim Binning/TheSwimPictures.com

The much-anticipated 100 meter freestyle lived up to its billing… but the order at the finish left a surprised look on most of the spectators’ faces. Florent Manaudou of CN Marseille, who had posted the world’s fastest 100 for the season last December, unrested and unshaven, with 47.98, missed his opportunity to swim the event in Rio. He finished third in Montpellier, in 48.10, behind Jérémy Stravius (47.97) and Clément Mignon (48.01). While all three came in under the FFN’s standard for selection to the French team in Rio, only the top two are chosen so Manaudou was out.

After the race, Manaudou told reporters: “I don’t know if I’m disappointed or happy. I think that with 48.10 I can’t do much in Rio, so that allows me to concentrate on the 50. I’ll have a good 50.”

Manaudou had placed his bet in December, announcing he would attempt the 50-100 free double. It is a little late to get into the game when your Trials are at the end of March, but he’d had good test swims along the way, including a 48.00 at the Golden Tour Camille Muffat meet in Marseille three weeks ago. The sprinter’s real challenge was not to overdo his first 50 and leave something for his back half. Earlier in the week Manaudou had stated his goal was to go out in 22.4 and come home in 25; tonight he took it out in 22.26 and led for 3/4 of the race, before ceding to back-halfers Stravius and Mignon.

Although disappointed with his time, since he was slower than in Marseille, Manaudou is looking forward to the 400 free relay, which he believes is “much stronger than four years ago.”

From the SwimSwam reporting on the event:

All the excitement in the air after the successful women’s 200 free made the men’s 100 free just that much more electric. This is the dominant event in French swimming, as evidenced by the continued success of their 4×100 free relay on the international stage. Any one of the top 5 or 6 qualifiers in the A final could have taken the title, but all eyes were on Florent Manaudou in lane 5. He and four of his Marseille teammates and training partners, including Clément Mignon who had swum the morning’s fastest time and Mehdy Metella in lane 3, took up five of the eight lanes. Jérémy Stravius of Amiens was in lane six, hoping to make the top two and earn his spot on the roster for Rio.

The start was fast, and sprinter Manaudou was out like a rocket. His goal was 22.4/25 for a 47.4; otherwise, he had stated in interviews, there wouldn’t be much chance in medaling in Rio. Manaudou was out even faster, in 22.26, and the excitement mounted. Second to the 50 wall was Stravius; Mignon, just behind. Manaudou led for most of the second half but ended up coming home in 25-high. Not only Stravius, but also Mignon got him at the end, and suddenly Manaudou was out of Rio contention. All three of the top finishers made the French cut but only the top two made the roster. Stravius won the race in a personal-best 47.97, his first time under 48 and the #2 time in the world so far this season.

Marseille teammates Fabien Gilot, minus the grizzly beard, and William Meynard, tied for fifth in 49.01. That’s a .19 improvement for the latter. Mulhouse’s Yannick Agnel went 49.14 for seventh, and Lorys Bourelly of Dauphins Toulouse was 49.56 for eighth.

Victor P, I know swimming is a sport of numbers but it’s not just a sport of numbers.
It’s one thing to swim 48.00 in a training meet in your home pool early March not fully tapered well relaxed with no pressure.
It’s another thing to deliver at nationals.
Manaudou always struggles in the last 25 of his 100s. Even in short course.
His body is huge. The biggest I have ever seen in swimming. It’s a big advantage in the 50 free. But I wonder if too many muscles are not a disadvantage in the 100 free.
He’s relatively young in that event.
And I’m pretty sure since the beginning that the idea… Read more »

Completely agree.. It’s like the difference between running the 100 and the 400

In the 100 you had short/stocky guys who looked like body builders.. Because they would essentially power through the race.. But that isn’t sustainable for more than 15-20 secs

The 400 you need to be able to relax to a degree while still maintaining serious speed.. There is substantial strategy involved, you can’t just hear the gun and go 100%

Phelps is the perfect example of this, where he wouldn’t stand a chance in hell in a 50.. But obviously is extremely good in the 100

How do you swim 47.98, unshaven and unrested, and then swim slower come show time?!

I think he knew about Stravius and Mignons back half would be better than his and panicked, going out way to fast. However 22.2 to the feet means good things for the 50.