2016 Canadian Olympic Trials: Smith And McCabe Set Up For Breaststroke 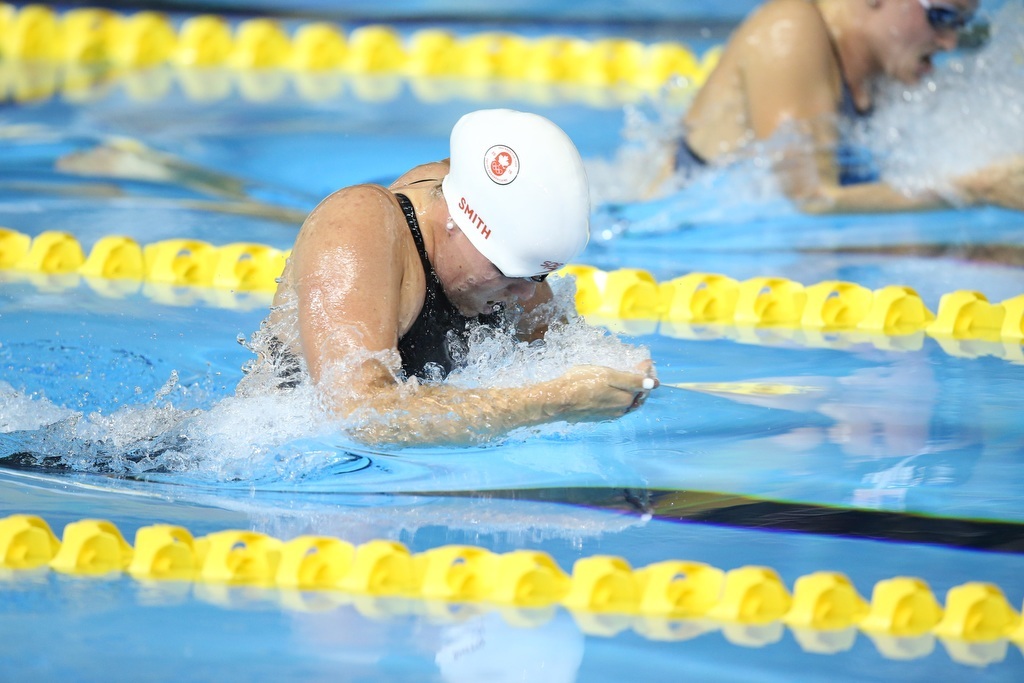 The Canadian women's team is looking to be well rounded with the potential to send a swimmer into the Olympic final in almost every stroke discipline. While women's backstroke has the most depth in Canadian swimming, women's breaststroke isn't far behind. With plenty of top competitors like Rachel Nicol, Kierra Smith, and Martha McCabe, Canada has the potential to send a very solid breaststroke group to Rio. Archive photo via Chris Tanouye/www.ChrisTanouye.com

The Canadian women’s team projects to be much more well-rounded with the a swimmer in position to make the Olympic final in almost every stroke discipline – after only earning 4 finals appearances in both London and Beijing. While women’s backstroke has the most depth in Canadian swimming, women’s breaststroke isn’t far behind. With plenty of top competitors like Rachel Nicol, Kierra Smith, and Martha McCabe, Canada has the potential to send a very solid breaststroke group to Rio.

The women’s 100 breaststroke has plenty of athletes who could make the team although only one enters with a seed under the FINA ‘A’ cut.

Rachel Nicol could be Canada’s best bet in the 100 after a bronze at the Pan American Games last summer and a 10th place finish at the 2015 World Championships.

While Nicol is in the lead with a 1:07.10 seed, Kierra Smith and Tera Van Beilen are both right behind her. The top three seeds have all competed internationally for Canada before and all three have been to a semifinal or better at a World Championships or Olympic Games.

With it being an Olympic season everyone’s going to be bringing their best, and when these three bring their best there’s no telling who is going to come out on top. Both Kelsey Wog and Martha McCabe will also be vying for an Olympic birth in this event, adding even more competition to the already close field.

The 200m breaststroke features two of Canada’s strongest medal hopes: Kierra Smith and Martha McCabe. While the 200 breaststroke is one of the fastest events globally, with many athletes sitting in the 2:20 range, both Smith and McCabe have the experience and speed to get a spot in the Olympic final.

Last season McCabe finished second to Smith in the 200m breaststroke at the 2015 Pan American Games, taking home her second international medal of her career following a bronze in the same event at the 2011 World Championships in Shanghai.

Although McCabe wasn’t as fast at the World Championships, she’s proven internationally that she can compete with the best in the world.

Smith is on the up-and-up right now, showing massive improvements over the last few seasons and establishing herself as a medal threat internationally. Smith won gold at the Pan American Games last summer, and qualified for the World Championship final with a time of 2:22.82.

In finals Smith came eighth, however her time of 2:22.82 would have secured her a finish just off the podium. With a little more international experience heading into this season, there’s no doubt  that Smith will be both a threat at trials and internationally.

While Smith and McCabe look to be well ahead of the rest of the field there are two more Canadians with seeds under the FINA ‘A’ time. Both Ashley McGregor and Sydney Pickrem are the remaining two who look to be in the best position to battle the two leaders.

McGregor has consistently been just short of making plenty of senior national teams and will be looking to end that trend at Trials. With a 2:26.72 seed time, she’s right in the mix.

Pickrem, whose more known for her IM prowess, will be looking to extend her event range to the 200 breaststroke. Pickrem has been a 2:26.

Kelsey Wog is a young up-and-comer from Manitoba. Much like a lot of the other young swimmers here, she’s going to be looking to make the transition from junior to senior level success here at trials.