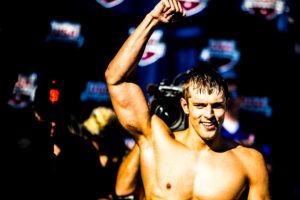 Kierra Smith
Kierra Smith is a Canadian breaststroke specialist and NCAA champion. Born Feb. 1, 1994 in Vancouver, Smith was a student-athlete at the University of Minnesota and was the 2015 200-yard breaststroke NCAA Champion with the third fastest 200 breaststroke time in NCAA history.

University of Minnesota
2012-2013
As a freshman Smith made the Big 10 Conference Team, where she went on to win her first Big 10 silver medal in the 200-yard breast. She also finished 3rd in the 100-yard breast and 10th in the 200-yard IM. Smith’s times qualified her for the NCAA Championships in her first season as a golden gopher. She just missed out on making it back to the consolation final in her best event with a 17th place finish. She also finished 42nd in the 100-yard breast.

2013-2014
In her sophomore season at Minnesota Smith made huge progress on the national level. The gophers picked up a 15th place finish in the 400 medley relay, and Smith finished 19th in the 100-yard breast to start off her individual events. On night three, Smith compete in her best event, the 200-yard breast, and advanced to the championship final. Smith ended up finishing 6th overall, picking up her first NCAA All-America title. To advance to the NCAA Championships, Smith dominated the Big 10 Championships. She took home the win in both the 100 and 200-yard breaststroke events and also finished 4th in the 200-yard IM.

2014-2015
Coming off of her first NCAA All-American swim, Smith advanced once again to the 2015 NCAA Championships after repeating as the Big 10 champion in both breaststroke evens. At the NCAA Championships Smith finished 24th in the 200-yard IM on night one and 26th in the 200 medley relay. On day two Smith grabbed All-American status in the 100-yard breast with her 7th place finish. For her primary event, the 200-yard breast, Smith became coach Kelly Kremer’s 3rd breaststroke national champion in the past 5 years. Her time of 2:04.56 placed Smith as the third fastest performer in the event in NCAA history. Smith was named the Big Ten Swimmer of the Year and the 2015 Golden Goldy’s Female Athlete of the Year Finalist.

2015 World Championships
At the 2015 Canada Trials Smith won the 200-meter breast, but was later disqualified for a controversial call stating that Smith’s elbows had left the water. The following day she returned with vengeance determined to finish within the top two of the 100-meter breast. Smith finished 2nd, getting a berth on the Pan Am Games and FINA World Championship Team.

At the World Championships, which were held in Kazan, Smith finished 7th in the 200m breaststroke and 21st in the 100 breaststroke.