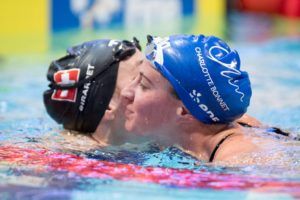 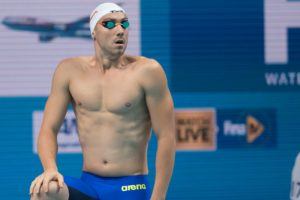 Jeremy Stravius
Jeremy Stravius is a French Olympian and versatile athlete. Stravius was born on July 14, 1988, and has won multiple medals across the Olympic and international stage. Swimming since he was 7 years old, Stravius won his first French National title in 2009. Although Stravius was primarily a backstroker earlier on in his career, he seems to constantly be branching out and finding new abilities.

International breakout
Stravius won his first French title in 2009, and competed at the European Championships later that year – he was apart of the winning 200m freestyle relay and finished within the top eight of the 50m backstroke.

First international medal win
In 2010 Stravius won his first individual international medal at the European Championships in Budapest. He won a silver medal in the 100m backstroke, as well as a gold in the 400m medley relay and bronze in the 800m freestyle relay.

Barcelona World Championships
At the 2013 World Championships in Barcelona, Stravius had a huge agenda ahead of him, swimming numerous relays and individual events. He won gold in the 400m medley relay and 400m freestyle relay, silver in the 50m backstroke and bronze in the 100m backstroke. He also swam the 200m medley and the 800m freestyle relay. In 2013 he broke the French National Record in the 200m IM, which had been held for four years.

The French 400 meter freestyle winning team from the Europeans managed to win gold again, this time at the World Championships in Kazan, Russia. Stravius anchored the relay, keeping the Russian team at bay. He also made the semi-finals in the 50 meter backstroke finishing 9th and the 100 meter freestyle finishing 13th.

Stravius began his Olympic journey at the French Trials in the 200 meter freestyle, up against the Olympic champion in the event, Yannick Agnel. Stravius took gold and punched his ticket to Rio, leaving Agnel behind in 3rd. In the 100 meter freestyle, Stravius edged another Olympic champion out of qualifying for Rio. This time it was Florent Manaudou who also finished 3rd while Stravius took the crown and the Olympic qualification.

In the 400 meter freestyle relay in Rio, Stravius joined with Mehdy Metella, Fabien Gilot and Florent Manaudou to take the silver medal. Stravius took over in second position for the anchor leg. Although he had the fastest split of the French men (47.11), he was up against Nathan Adrian who extended the United States’ lead. France took second in 3:10.53.

Stravius finished 4th in the final of the 50 meter backstroke in 24.61. His teammate Camille Lacourt won gold in 24.35.