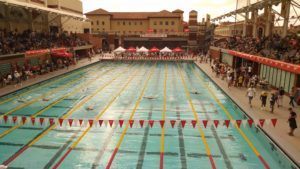 French sprinter Amaury Leveaux is back, and eyeing a gold medal in the 50 free at the Olympic Games in Tokyo in 2020. 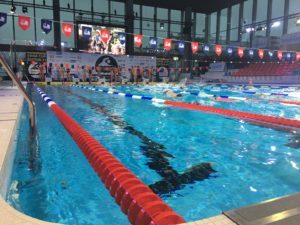 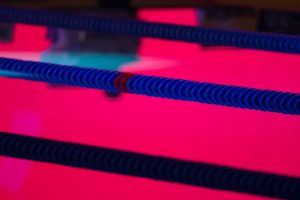 According to L’Equipe, AFLD has handed down a six-month suspension to Marseille coach Romain Barnier for alleged anti-doping rules violations. 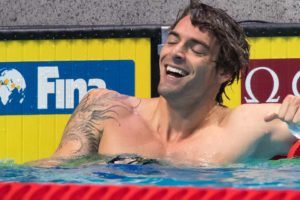 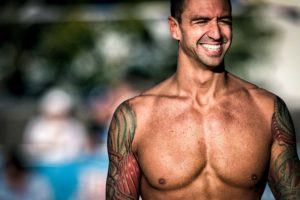 Ervin, Gilot To Participate In Torch Lighting At Maccabiah Games

Anthony Ervin will be one of seven athletes participating in the torch lighting ceremonies at the 20th Maccabiah Games.

Fabien Gilot
Fabien Gilot is a sprint freestyle specialist born in Denain, France. Born Apr. 27, 1984 Gilot has been successful in the swimming realm for a long time, competing in both the pre-textile and post-textile suit eras. He has been a member of France’s Olympic team in 2008, 2012 and 2016 winning two golds and a silver medal.

Tattoos
Gilot is a two-time Olympic medalist, and has a tattoo of the Olympic rings on his underarm. He has a more personal tattoo that was on full display at the 2012 London Olympics, written in Hebrew and translated as, “I am nothing without them.” The tattoo is a tribute to his late grandfather figure, Max Goldschmidt, who was an Auschwitz survivor. Gilot’s moving tribute caught media attention after his gold-medal win in the 400m freestyle relay at the 2012 London Olympics.

International breakout
Gilot won his first major medal at the 2003 World Championships in Barcelona. Along with his French teammates, Gilot won bronze as a member of the 400m freestyle relay. The following year he won another bronze medal in the same event at the European Championships in Madrid, and same at the 2004 Athens Olympics.

At the 2013 FINA World Championships in Barcelona, Gilot became a double World Champion as a member of France’s 4×100 meter freestyle and medley relays. In the freestyle relay, Gilot had a stunning third leg for France. His 46.90 split was the fastest of all swimmers. He was joined by Yannick Agnel, Florent Manaudou and Jeremy Stravius to take gold in 3:11.18 and beat out USA and Russia. In the medley relay, he held off Australia on the final leg to take gold in 3:31.51.

In 2014 Gilot was successful at the European Championships and the Short Course World Championships. He won two gold medals and two silvers, including an individual silver in the 100m freestyle. In 2015 he’s competed at the French Championships and mostly local competitions, but he’s also added in some butterfly races to the mix.

In Rio, Gilot and his 2015 world champion teammates joined together again in the 4×100 meter freestyle relay. France took the silver behind USA in 3:10.53.