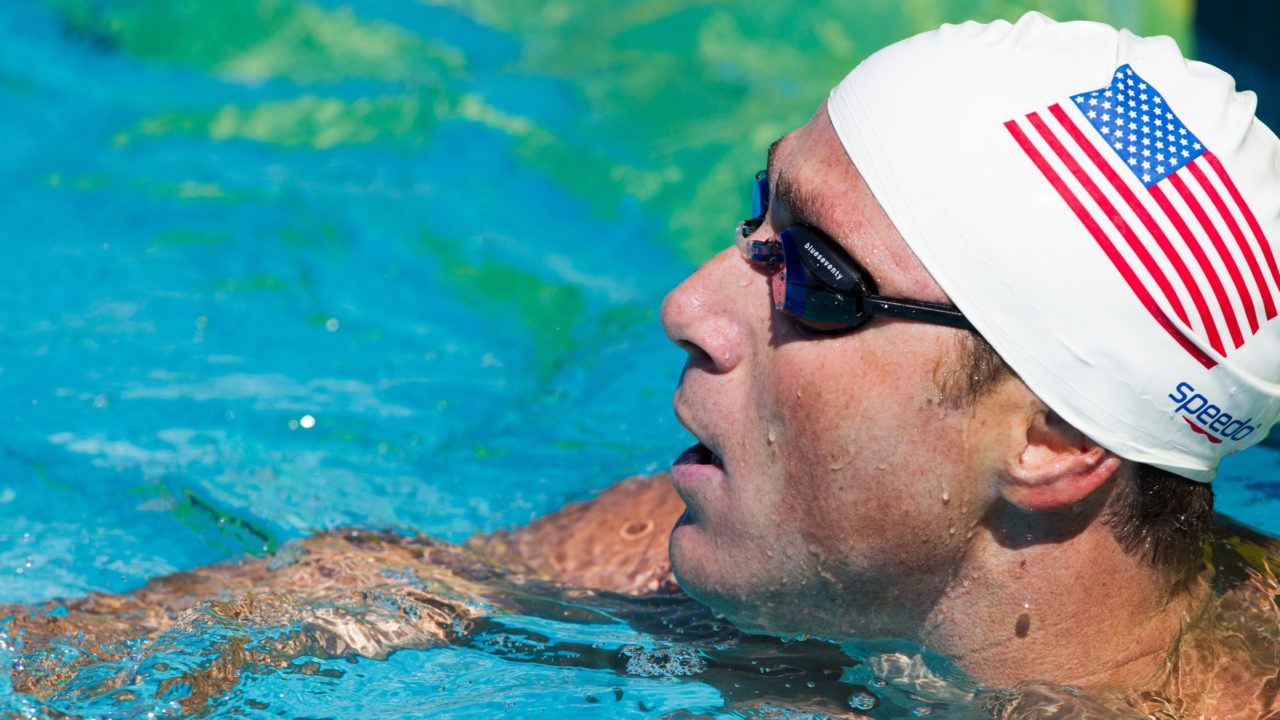 Bousquet talks about how the French coaching staff changed the order at the last minute, while Lezak discusses what plagued the U.S. in the years leading up. Archive photo via Tim Binning/TheSwimPictures.com

The men’s 4×100 freestyle relay at the 2008 Olympic Games in Beijing is one of the most iconic races in swimming history.

It was an epic showdown between the heavily favored French, led by individual 100 world record holder Alain Bernard, and the United States, who needed to win their first gold in the event since 1996 in order to keep Michael Phelps‘ hopes of eight gold medals alive.

Jason Lezak and Frederick Bousquet, who were the two fastest swimmers in the entire race, joined two-time Australian Olympian Brett Hawke on his podcast Inside with Brett Hawke recently to discuss the race.

The two shared several interesting insights on what went down 12 years ago, including the reality behind the pre-race ‘trash talk’ from the French.

“There was a lot of talk around this relay the day before, and a lot of journalists took this story and they made it their own story,” Bousquet told Hawke. “What I want to say is that, Alain Bernard for instance, he’s a humble guy, he’s not shy, but he’s quiet. He would not trash talk, especially about the Americans knowing that Phelps and Lezak are on this relay.

“It was just build up from the media that, the French are coming and they’re going to crush the Americans. No way, we didn’t say that. We thought that we could beat them, but not for sure.”

The now 39-year-old Frenchman, who split 46.63 swimming third, also shared the story on how the coaching staff changed the relay order the day of the race, something that didn’t sit well with the team.

Amaury Leveaux was slated to lead off, primarily because he had great underwaters and was untrustworthy on takeovers, Bousquet said. He also said the plan was to have Bernard go second, due in part to the fact that this would be his first Olympic race, and that as the individual world record holder, it may do something to his psyche if he saw his record go down before swimming. Bousquet says that he saw Alexander Popov react negatively when Michael Klim broke his 100 free world record leading off during the 2000 Olympic relay.

(Australia’s Eamon Sullivan actually did break Bernard’s world record on the lead-off, going 47.24 to erase the previous mark of 47.50.)

Fabien Gilot was going to swim third, because he had for the last several years, and Bousquet would go fourth because he had the most experience and “knew how to anchor a relay”.

The morning of the final Bernard’s coach let him know the order had been flipped.

“Maybe for a minute, it took all of us out of the race, what we were there for,” said Bousquet. “It just got us so angry and upset at the same time, towards our federation, the staff. We already started losing the race at that time. Obviously we got our brain back and we decided that no matter what we’re still going to go out there and give our best.”

Bernard had been given the anchor leg, with Gilot to go second and Bousquet third.

“Once the race started and how the race went, I can tell that it had no impact on our individual races. We were able to focus back and put that aside and put on a great performance.”

Lezak talked about why he felt the American men hadn’t been successful in the relay in previous years.

“And I don’t think we did that in that 4×100 freestyle relay from 1999 to 2004 with Team USA, and I was apart of every one of those relays. I’m not saying it was my fault, but all four of us couldn’t come together to do what it takes.”

So, prior to the race, with all of the talk surrounding the race squarely on Phelps and his chase for eight gold medals, Lezak wanted to take some of the pressure off of him and inspire the team to swim for something bigger than themselves.

“I said, look guys, this is not a 4×100 freestyle relay, this is a 400. Let’s go swim as one. I could see in their eyes that they knew this was more than one person going out and swimming a race, and it was going to rely on all of us to do it right.”

Bousquet and Lezak also went into detail on their emotions as the race was unfolding. Bousquet talked about how he saw Bernard go out so fast, and Lezak discussed how he initially thought he had jumped early on his exchange.

He went on to say he had to pull the team aside and remind them how far they had come, and that they’d just won the silver medal rather than lose the gold medal.

Lezak says normally, for his best races, he’s gone on auto mode. But for this race, he was constantly having to talk himself through situations. First the relay exchange, then losing ground on the opening 50, before he was able to surge on Bernard and edge him at the wall.

After Bernard gained an extra 0.23 on Lezak on the first length, Lezak came through in 24.56 down the second lap, clocking what remains the fastest relay split in history at 46.06. Bernard split 46.73, still a full 0.77 seconds under his world record entering the race.

You can listen to the comments from both Lezak and Bousquet on the podcast below.

Lezak’s fastest ever 100 m free from the gun was 47.58; deducting the nominal 0.5 seconds for a rolling relay start, his fastest would be 47.08; he did a 46.06 against Bernard in the anchor leg of the 2018 Olympic 400 free relay because Bernard made the mistake of allowing Lezak to draft off him for 100 meters which exhausted Bernard ( as can clearly be seen in the video of the race) and allowed Lezak to go 1.02 seconds faster than he possibly could have without Bernard’s help

I mean, regardless of the politics of relay order, the French would have won if not for the karate-chop-random-act-of-God-once-in-a-lifetime-swim anchor leg that came out of Lezak. Nobody can prepare for that kind of absurd out of mind swim.

The French may very well have been faster if they’d stuck with their original order. But the take away from this race is that it wouldn’t have mattered how fast they went. Lezak wasn’t going to lose.

Monumental screw-up by the French coaches, but then again, monumental anchor leg by Lezak, so who knows what would have happened otherwise.

The good thing though, from a French point of view, was that the French coaches didn’t repeat their mistake in 2012 in London, and then all four French swimmers had the swim of their lives.

For a guy like Bousquet who was then at the top of his form and a great relay swimmer, I can understand that the coaches’ decision was a tough pill to swallow.

“I said, look guys, this is not a 4×100 freestyle relay, this is a 400. Let’s go swim as one. I could see in their eyes that they knew this was more than one person going out and swimming a race, and it was going to rely on all of us to do it right.”

-that statement sums up the type of leadership required at the Olympics/International meets. Clearly missing from the London games 4×100 F Relay

They were not a “team” in 2012 but they lost because the French were better .

Adrian swam a lifetime best leading off (later .3 faster in the individual) and then Phelps, Jones and Lochte all swam
Times consistent with their lifetime textile best splits

no doubt france was the better team that day. but I always thought the US walked out looking like they each had their own block for a 100 + lacked chemistry. France looked like a complete unit ready to race for the full 400 meters