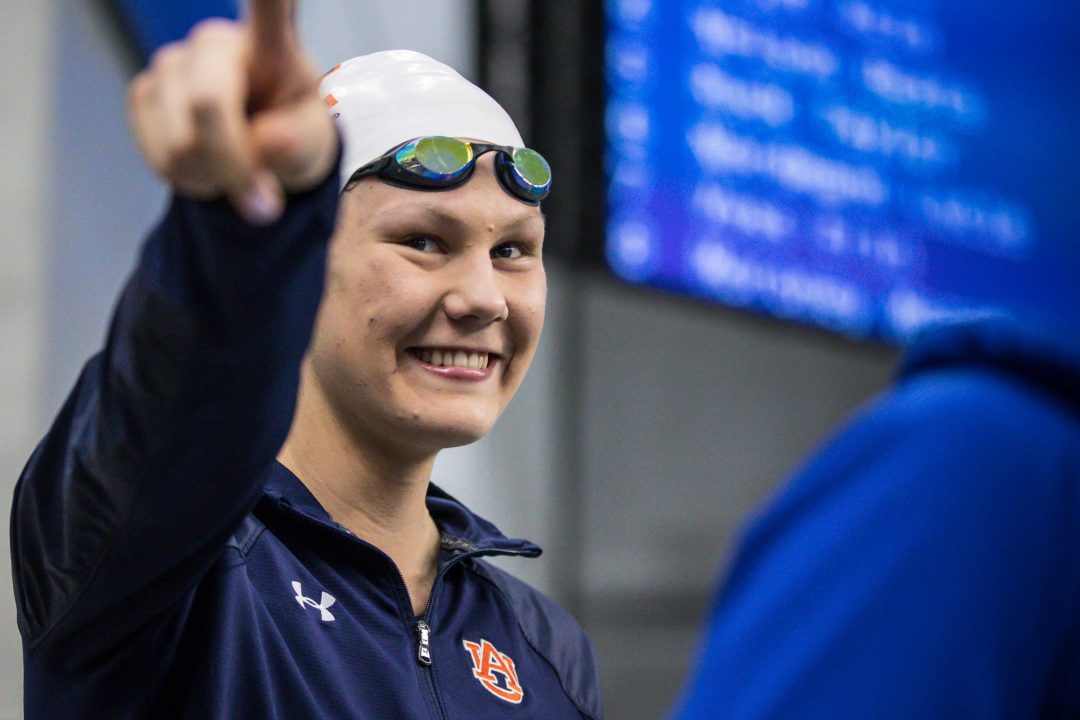 The German-born Oeztuerk finished 6th at the 2019 NCAA Championship meet in the 200 backstroke as a sophomore and ranks 2nd in program history in that event. Current photo via Jack Spitser/Spitser Photography

Gallant finished fifth in the mile at the 2020 Big Ten Championships as a freshman, while Karl scored in multiple events in 2019 and 2020.

After the Iowa Program Cut, Preston Planells Lands at Utah

Preston Planells has announced his transfer to the University of Utah after the elimination of the Iowa swimming and diving program.

After Boise State Cut, Emma Brady Will Remain in the Mountain West

After spending her freshman season at Boise State, Bend, Oregon native Emma Brady will transfer to the Univeristy of Nevada.

5-time CSCAA All-American swimmer Sonnele Oeztuerk has entered the NCAA Transfer Portal, indicating her intent to leave Auburn University. She will have 1 season of eligibility remaining.

Oeztuerk, who declined to comment on her reasons for leaving, confirmed the news to SwimSwam on Tuesday.

At the last NCAA National Championship meet in 2019, as a sophomore, she placed 6th in the 200 backstroke, and also swam on the school’s 15th-place 800 free relay.

She qualified for the NCAA Championships in all 3 of her seasons at Auburn, including a 14th-place finish in the 200 back as a freshman in 2018. That year she also swam on Auburn’s 800 free relay, which placed 15th as well.

Oeztuerk leaves Auburn ranked 2nd in program history in the 200 yard back behind only 7-time Olympic medalist Kirsty Coventry.

Brett Hawke was the program’s head coach during her freshman season, with Gary Taylor leading the way in the last 2 years.

Oeztuerk is back home in Germany, and is still working out her training situation there. She says that she hopes to return to the NCAA for the 2021-2022 college season.

In long course, Oeztuerk 5th all-time in Germany in the 200 backstroke with a best time of 2:09.98. That time, swum at the 2017 German Junior Championships, ranks her 3rd among all Germans since the 2016 Olympic Games.

All of the swimmers on that list are significantly older than Oeztuerk: Laemmler by 4 years, Graf by 6 years, and Mensing by 12 years.

With some of the toughest selection criteria in the world, the country didn’t have any entries in the 200 back at the 2019 World Aquatics Championships. It took 2:09.40, just half-a-second better than Oeztuerk’s best time, to make the final in Gwangju.

I hear that there are quite a number of girls that have either left or will be leaving the program due to coaching issues. Not sure of the entire story there. Hate it for those kids though.

For us still outta the loop what’s going on?

Like Domino said, multiple females have left the team due to coaching issues. And issues with the racial injustice conversation within the team and coaches

This is just the start to the downfall of the Gary Taylor regime. Toxic environment

Such a toxic environment. Not fair on the athletes whatsoever. Hopefully they eventually get the college experience they deserve

It has been going on way longer then 6 weeks! Gary Taylor created nothing but a toxic environment from the time he was hired. The things he has said to the young adults on this team would leave you with your mouth hanging open. Nothing but negativity and no regards for Auburn traditions.

I agree. 6 weeks ago was when the athletes started standing up for themselves. Somehow there wasn’t a mass exit last year, only a few. But now it’s happening

what specifically did taylor do?

3
-7
Reply
What goes around...
Reply to  swimmieeee

maybe you could answer the question instead of deflecting?

There is always two sides to a story. Gary Taylor is very honorable and has big aspirations for the team. Don’t forget swimmers are allowed to opt out due to covid. Also seasons may get cancelled which has driven seniors to focus on life beyond swimming.

I agree. In all of my dealings with Gary Taylor, he has been very honest and professional.

It is important to keep in mind the above statements are opinions not facts. These comments are misleading and unfair, I don’t think Gary Taylor or Auburn can or will speak about this. I know for a fact the vast majority is happy to be there, and proud to represent Auburn. I only know of one swimmer transferring.