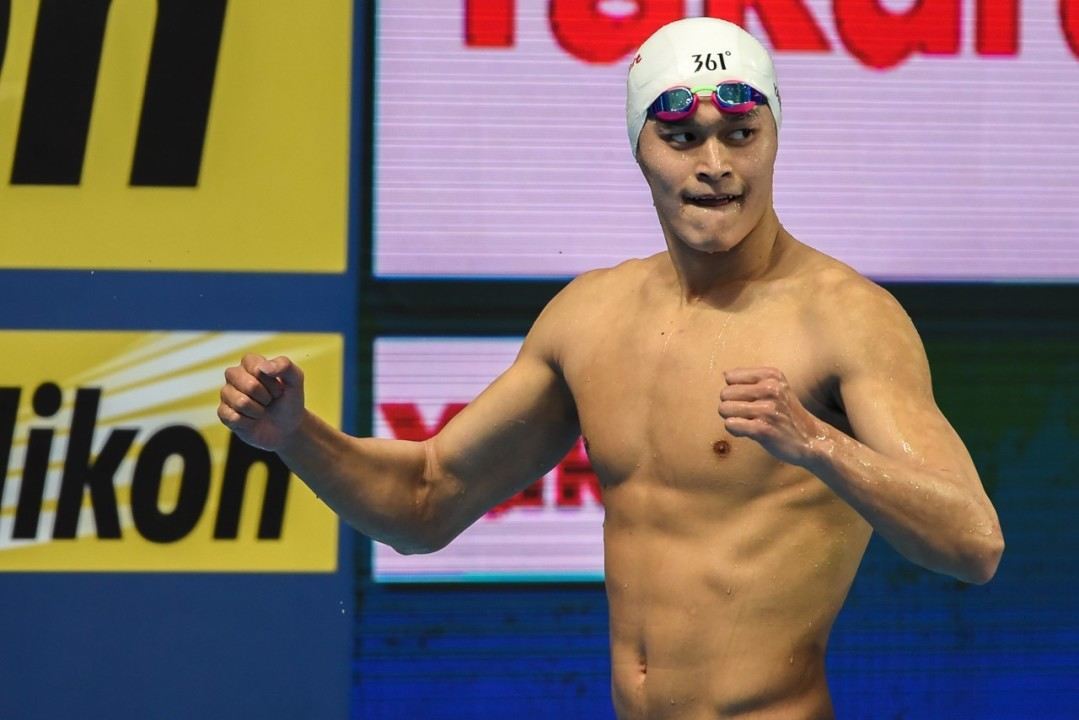 Australia is at risk of being seen as a “safe haven for drug cheats” reports Fox Sports Australia after recounting the recent key World Championships medalists who have both been trained by Australian coaches and have also been involved in doping ordeals.

Australia currently allows Sun Yang and Ning Zetao to train within its borders, both of whom have tested positively for banned substances and had been given suspensions in the past. Yang earned gold in Kazan in the 400m and 800m freestyles, while snagging silver in the 200m freestyle.  For his part, Zetao stunned a stacked field, including Australia’s Cameron McEvoy and America’s Nathan Adrian, to swim away with the gold medal in the 100m freestyle event.

Not only are the doping-incident-shrouded swimmers training in Australia, says Fox Sports Australia, but coaches are monetarily benefiting from it – and in a big way.  Government-funded swim coaches are said to be “double-dipping” by coaching both local, Australian swimmers, as well as their rival foreign competitors for financial gains.

For instance, sources have said that Australian coaching legend Denis Cotterell earned an estimated $250,000 from China for each gold medal earned at the 2012 London Olympic Games.  The Sunday Telegraph estimates Cotterell made between $750,000 and a million dollars for helping Yang win two golds at those Games. But, Cotterell has also continued to be paid $100,000+ by Swimming Australia.

Sun Yang no longer trains under Cotterell, but still trains in Australia. After news of his doping incident reached the organization, Swimming Australia publicly announced that Sun was no longer welcome at their official training centers and ordered Cotterell to sever ties with Sun.

Zetao trains under Matt Brown after having tested positive for steroids in 2011, but Brown defends his coaching decisions.  Brown labels the criticism and suspicions around Chinese swimmers training in Australia as “Chinese bashing”.  Says Brown, “If you coach a long enough for a period of time there are bonuses [from China], I don’t want to go too much more into that, but that’s not why you do it though.”

Brown stands to earn a six-figure dollar amount in Rio under China’s Olympic reward system, of which the coach of almost 30 years says, “You have to be stupid to say, if it was offered, that you’d turn it down.  At the end of the day we are professional coaches. Personally, I have had to change states to go to a new job to  survive in Australia coaching, my family are still up in Brisbane, people have to do what they have to do.”

Legendary coach Bill Sweetenham voices his opinion on the subject very frankly, saying “If they [swimmers] have been found to be cheating they should not be welcome in any swimming program in Australia. Whether they tested positive in 1972, 1980, 2011 — as soon as you compromise; where do you stop?”  Sweetenham went on to state that, “I don’t want Australia to be seen as a haven for drug cheats, however it may be too late.”

Brian Sutton, former Australian Olympic team coach for the men, echoed Sweetenham’s views saying “Dopers should get life. This is an issue Swimming Australia should take on — they should have no tolerance for doping — they shouldn’t be allowed to be coached by Australian coaches in Australia.”  Sutton firmly stated his belief that “anyone coaching foreign swimmers should not be eligible for any funding.”

Unless an overhaul of the existing rules regarding Australian coaching of foreign athletes takes place, it doesn’t seem as though this trend will cease anytime in the near future.

Then Australians shouldn’t be allowed to train out of Australia, especially in USA. There are many countries who got caught doping, including the Australian swim team in London. https://en.wikipedia.org/wiki/Doping_at_the_Olympic_Games – Stop making excuses for your own country. What’s sad is I don’t see any Aborigines playing for Australia.

Did King and Brown receive bonuses from the Chinese for success in the pool at the Worlds?

Why was banned swim coach, Brian King, not mentioned in this article? He’s been training the Chinese in Australia.

DUI convictions have nothing to do with the PED debate. And for the record, anyone who drives a car can kill somebody through negligence, which can also result in a criminal conviction. Do you want to ban everybody with a drivers licence?

And having two DUI,s mean phelps could have killed somebody twice.

Add Michael Phelps to the list and yes marijuana and cocaine should be tested.
Kylie Palmer too tested positive.you forgot her.

Sun Yang
Park Taehwan
Ning Zetao
Ous Mellouli
Vitaliy Melnikov
Yuliya Efimova
Daria Ustinova
Jessica Hardy
Fred Bousquet
Cesar Cielo
Nicolas Santos
Daynara DePaula
… Some of these cases MAY be innocent mishaps. But what these swimmers ALL have in common is they are ALL eligible for the 2016 Olympics. That is not right.

Dopers should be banned from the Olympics. Period. Unless you take away the incentive, people will cheat.

Until the ban is anything but a specified period , we should go with the way it is.
That said Suns in house ban rather than Wada ban was possibly a tad short.
I get that some want the drug takers out of the sport for good , but until the rules change the bans need to be upheld globally.