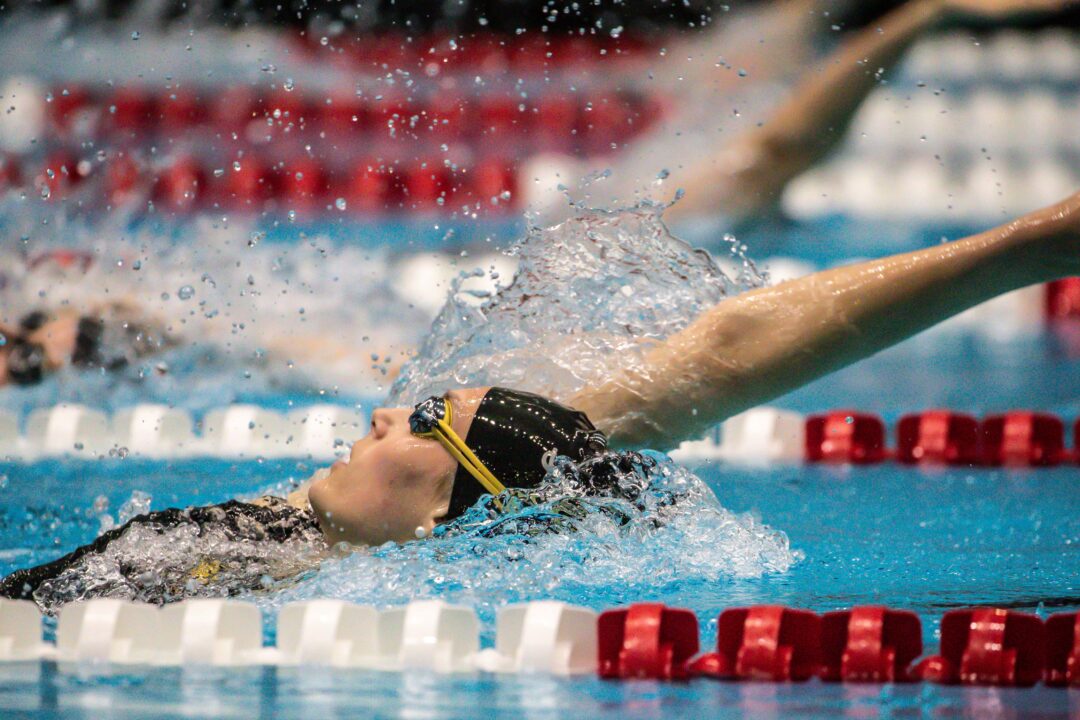 Alex Walsh and Nicolas Albiero scratched from the semi-finals of the 100 back on night 2 of Olympic Trials. Ashley Twitchell also scratched the 400 free. Current photo via Jack Spitser/Spitser Photography

There were a number of scratches for the day 2 finals/semi-finals session of the 2021 US Olympic Trials.

As previously reported, both Caeleb Dressel and Ryan Held scratched the 200 freestyle semi-finals after qualifying 2nd and 11th, respectively. Their scratches move Grant House (1:48.18) and Julian Hill (1:48.56) into the semi-finals.

Another previously reported scratch was Regan Smith’s scratch from the 100 butterfly final, as she will focus upon the 100 backstroke semi-finals, where she is the top seed.

Other scratches for tonight include Nicolas Albiero and Alex Walsh pulling out of the men’s and women’s 100 backstroke semi-finals.

Albiero qualified 13th this morning in the men’s event, and does not have any other events tonight. His scratch moves first alternate Destin Lasco into the semi-finals, after he missed it by .01 this morning.

Walsh was the 13th qualifier in the women’s event after making semi-finals in the event at the 2016 Olympic Trials. Like Albiero, Walsh does not have another event tonight. Her scratch moves JoJo Ramey into the semi-finals.

The only other scratch was Ashley Twichell, who was the 8th seed in the 400 freestyle final. Twichell is already qualified for Tokyo in the open water 10k via her placement at the 2019 World Championships and is most likely saving her energy for the 1500 freestyle and 800 freestyle later this week. Her scratch moves 16-year-old Cavan Gormsen into the final after she finished 9th this morning.

Awesome for Cavan Gormsen to get a finals swim at 16. Gotta be exciting!

Im thinking he’s going for as many PB’s as he can intelligently and safely swim, which let’s be honest is what the primary goal is in this sport for most, the desire for personal improvement.

Imagine if Andrew tires and gets 3rd on 100 breast..

It is always funny to watch you become intensely envious and start predicting negative things for young American stars. You’ll be doing it forever Rafael.

MA knows what he is doing!

I agree with you on the 57.9. I honestly think he has that in him. However, can anyone point out a time where MA handled a double particularly well? Just curious.

If he can swim that 100bk semi in a 53.5 or better after the 100 BR tonight, that may give us an indication of what the back half of the IM will look like. He typically doesn’t do well with 100 doubles especially that close together.

He’s in that second heat as well so what? 30-45 minutes between races?

Probably about an hour I would think

ah for some reason I thought that the 100 breast was the first event.

I do not understand what MA is trying to achieve by swimming 100 back. So far away from Murphy and Cassas

Could just be going for a best time. Or he wants to have a race tomorrow, for some people a day off in the middle of the meet is tough to come back from.

Pride goes before a fall