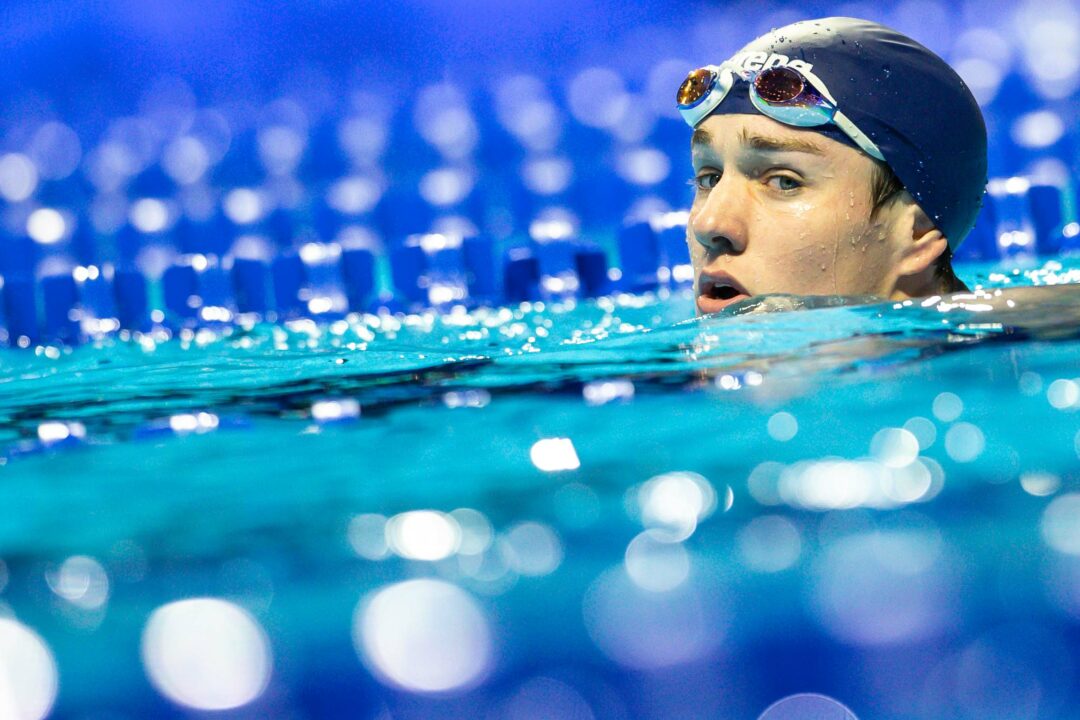 Since two men didn’t hit the ‘A’ standard here, whoever has the fastest ‘A’ cut time, and the highest finish at Trials, at any other meet gets to go Current photo via Jack Spitser/Spitser Photography

It was Kieran Smith against the clock in the men’s 400 free final, and the University of Florida swimmer got the job done as he torched his personal best and got well under the FINA ‘A’ cut in a time of 3:44.86.

This performance makes Smith the first first-time Olympian of the Trials so far. He now ranks tied for 10th in the world this season.

Four men ended up finishing within three-tenths of one another in the hotly-contested race for second, with Carmel’s Jake Mitchell out-touching Ross Dant, Chris Wieser and Brooks Fail in a time of 3:48.17. That falls two-tenths shy of Mitchell’s best of 3:47.95, set at the 2019 World Juniors.

Since two men didn’t hit the ‘A’ standard here, then whoever has the fastest ‘A’ cut time, and the highest finish at Trials, at any other meet in the qualifying period gets to go. That window is open until June 27. Zane Grothe, who is not in this final, has hit the cut. There’s a FINA-approved meet in Mission Viejo June 26-27. If a swimmer achieves the cut in Mission Viejo, and finished ahead of Grothe here in Omaha, they would get the spot above him.

We believe in you Jake! Big support from Carmel Indiana!

I think it’s a tall order for any of them to go 3:46. Also what a weird dynamic for a race. Going under the cut and winning doesn’t guarantee you a spot, because if someone beat you in finals and also goes under the cut they get the spot, even if you beat them by 5 seconds.

I don’t think we get more than one of these guys under the A cut, if that. And if anyone is that far under the A cut, but doesn’t make it because someone else who beat them at trials got it I won’t feel bad. They had their chance at Trials like every other swimmer.

I’m excited for him. I think he can do it. He’s been 3:47 before and admits he swam this race conservatively. It’ll be interesting to see if he tries to take it out faster & hold on.

They should have somebody rabbit for them

Eh, I don’t think you need to go 1:50/1:55 to get the time. I think 1:51 high/1:54 high should be enough if you split it right. Some people can probably get even closer to an even split than that. Depends on the specific swimmer though.

He also said he was in serious pain at the end (as anyone would be, racing).

I agree with the folks saying that dropping to 3:46.78 is a tall order for anyone with a shot.

Seems like Grothe is marginal to make the team given the 26-man limit — if none of the 2 through 8 finishers hit the 400 Free Olympic qualifying standard. I would like to see him swim the time trial to show that he can hit the standard now and, if he can’t, he would at least help the other 7 swimmers to get the standard.

He’s got 3 other events, and I don’t see why he would help another person take his slot.

The time trial will be at the end of the meet, right? And like I said, he is marginal to make the team given that he finished ninth in the prelims and the team has a 26-man limit including relay specialists.

I would agree that he should not swim the time trial if he makes the team in another event — because then the coaches will allow him to swim the 400 Free as well.

Could someone hypothetically break the World Record in the 400 time trial and not get selected on the Olympic Team because they didn’t swim faster than Grothe earlier?

Is there any chance Ledecky and Phelps could deck enter the 400 Free Time Trial?

Uggh, if they break the world record, then ipso facto they would swim faster than Grothe’s time.

The rule is that they had to beat Grothe earlier and make the A cut. If whomever got 15th swam a world record between now and the Olympics that person would not be eligible to make the team. ‘earlier’ is the key word there

Oh yeah. I am assuming that only those seven swimmers who finished 2 through 8 on Sunday, plus maybe Grothe, are going to swim the Time Trial at the end of this meet, and again at Mission Viejo. Of course, others can possibly swim it, but can you think of anybody else who could realistically hit the Olympic qualifying standard?

No, but the OP was asking hypothetically as he mentioned…curious of the technicalities I assume, so it doesn’t really matter if there is actually someone who is capable in relation to his question.

It’s like breaking the world record in a B consolation final. You’re still 9th place. (I think this actually happened at a Pan Pac meet a few years ago, in part due to the restrictions on number of swimmers per country in the final.)

The meet sanction requires you to be entered in the meet to enter in any time trial events, so Phelps would be out. Ledecky can’t swim in a men’s event; she would require at least one lane of separation if they combined the events in one heat.

That said if it happens I will be rooting for them as hard as anyone to make it happen.

Just admit you have a we