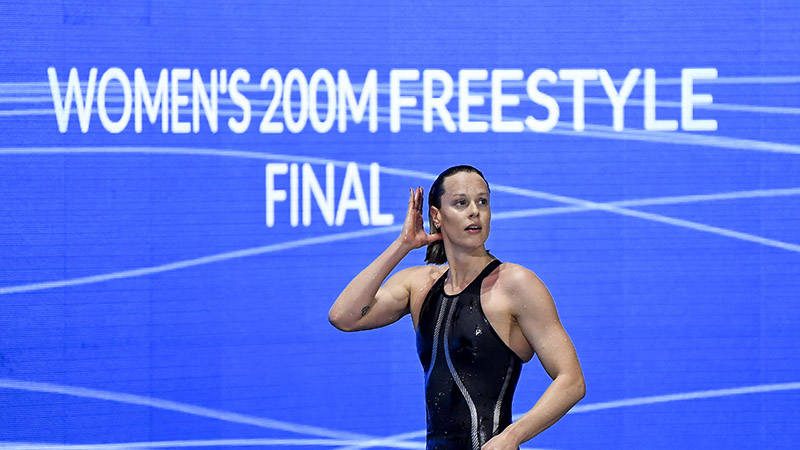 As one of the world's most decorated swimmers, Federica Pellegrini has announced that she will be retiring after the 2021 ISL season. Archive photo via Andrea Staccioli / Deepbluemedia / Insidefoto

In a press conference on Monday in Naples, Italy, it was announced that Federica Pellegrini will return for a third season of racing within the International Swimming League and will serve as team captain of the Italy-based Aqua Centurions.

While she announced that she will be in attendance for the 2021 ISL season, she added that it will be the final venture of her swimming career.

“I have already put my body and mind through the stress of arriving in Tokyo after a one-year delay. I can go on a few more weeks after the Olympics. Not more than” said Pellegrini.

This appears to be the “surprise swimmer” that ISL has been teasing since they announced the pool of eligible swimmers a week ago. While not necessarily a surprise, as she has participated in the last 2 ISL seasons as Aqua’s captain, the press conference probably serves an important function of affiliating Italy’s most popular swimming entity, Pellegrini, with the league that will be hosted there.

Pellegrini has been racing at the highest level of the sport for more than a decade and has been one of the most consistent forces on the international scene in the 200 freestyle that the sport has ever seen. Pellegrini broke the women’s 200 freestyle world record back in 2009 with a 1:52.98 and has reached the podium in the event at 8 straight World Championships as well as at 2 Olympic Games.

Pellegrini only raced in one meet last season for the last-place Aqua Centurions because of a positive COVID test before she was scheduled to depart for the bubble.

Pellegrini has qualified to race at her 5th straight Olympic Games this summer and will race her signature 200 freestyle for Italy. Pellegrini will enter as defending world champion in the event this summer at her last major international long course meet. Pellegrini will need to watch out for Australian record holder Ariarne Titmus who won silver in 2019 and recently posted a 1:53.09 at the 2021 Australian Olympic Trials to get within striking distance of Pellegrini’s world record.

With the one year relay there is 4 straight years of championship meets ( Olympics, worlds, worlds, Olympics) she’ll be back the next 2 years to try and win 2 more world titles

“Pellegrini has been racing at the highest level of the sport for more than a decade”. That sounds somehow like an understatement. She won her first Olympic medal in 2004, 17 years ago.

I’ve lost track of how many retirement announcements there have been. She craves the attention. What she wants to hear is: “Please Federica, stay! The world of swimming will not be the same without you!”

We have to remember that Italy has a home european championships in 2022 as well, so someone could expect one more delay in her retirement to swim there. And then, Paris will be two years away, so she might give it a go…

Pellegrini is a legend.

She is also the Conor McGregor swimming equivalent in terms of announcing her “retirement”.

…but she definitely won’t be racing the 200 free