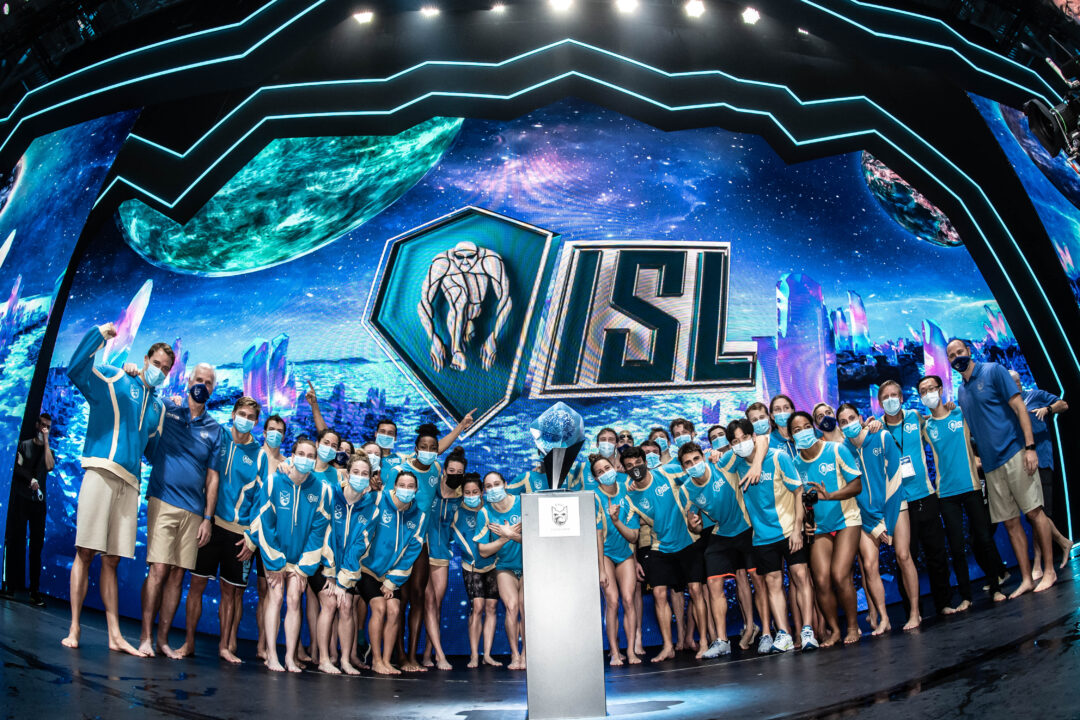 The 940 names released represent most of the athletes who will be eligible for selection in June's inaugural ISL draft. Archive photo via Mike Lewis/Ola Vista Photography

The International Swimming League has released an almost-final list of athletes who have registered to participate in the newly-devised draft ahead of the 2021 season.

The list comes with a few caveats that keep it from being complete. One is a “surprise swimmer that has registered but does not appear on the list,” which the league says will be announced in the coming days. Given the nature of that callout, along with the league’s past, it seems like that name will be a pretty substantial addition.

While that leaves open a pretty broad range of possibilities, the two biggest eligible athletes who aren’t on the list are Americans Katie Ledecky and Simone Manuel, both of whom have multiple Olympic gold medals. Manuel has not yet competed in the ISL, while Ledecky raced in one meet in season 1 but did not return to the DC Trident for season 2.

If the ISL holds to its firm May 31 deadline to register for the draft, that means that at best, one of them is the “surprise swimmer” and the other is not competing.

The other note mentions that “There are a few other swimmers, under 18 y.o., who have registered and are not listed, as we are in the process of clarifying the league participation procedures with their legal guardians.”

While the ISL draft rules say that athletes must be 18 to register for the draft, in the weeks since those rules were released, SwimSwam has learned that this is not a hard-and-fast rule, but that there will be certain extra rules in place for junior athletes, including requiring a guardian to attend with them and for their legal guardians to sign special waivers.

There are a few junior swimmers on the list, including Benedetta Pilato of Italy and Jacob Whittle of the UK, who raced last season and are listed this season. That leaves some unknown as to who else might be participating.

The list includes all of the major players from last season, though the final draft list may not be entirely reflective of who is planning to participate in the 2021 season. SwimSwam has spoken with at least 3 athletes who have said that, while they are on the list, they do not plan to participate in Season 3 of the ISL – though that was on condition of their names not being shared. Others have expressed uncertainty of their desire to participate after the grueling Olympic period, but have said they entered to give themselves more time.

Some of these names will become more clear when the draft begins in late June and teams don’t save swimmers that they otherwise would have.

There are two other substantial names missing from the list that we could identify. One is the former Aqua Centurions captain and masthead Federica Pellegrini. She participated in each of the first two seasons of the ISL as a star for the Italian team, but her absence here aligns with her continued hints at reitrement after the Tokyo 2020 Olympics. She was the 2004 Olympic silver medalist and 2008 Olympic gold medalist in the 200 free, the current World Record holder in the same event, and also the two-time defending World Champion.

Also absent is Spanish swimmer Mireia Belmonte, who has battled health issues for years. The 30-year old has been registered for each of the first two seasons of the ISL, including last season for Iron, but hasn’t actually raced. There is widespread speculation that she will retire after Tokyo, though she hasn’t made any announcement one way or the other.

One more surprising absence is Kaylee McKeown, who is one of a handful of Australians who would be expected to compete but who aren’t on the list. The 19-year old is one of the hottest global names in swimming. Like most Australians, she didn’t compete last season under pressure from the federation and Australian government, but in season 1 she raced for the last-place Aqua Centurions.

Among other absent Australians are also Elijah Winnington and Mack Horton. Winnington raced for the London Roar in season 1, where he ranked 73rd in the league in MVP scoring and was one of the breakout stars of the season.

There are a few notable presences on the list as well, including Ryan Hoffer, who finished his senior season at Cal in the fall. The NCAA, which governs collegiate sports in the U.S., issued a special waiver for those athletes who participated in the 2020-2021 COVID-impacted season to extend their eligibility by one year from four to five seasons.

While participation in the ISL disqualifies athletes from the NCAA, the ISL has extended the period for NCAA athletes to decide what they’re going to do. That period was moved from the original June 1 deadline to June 22, which is before any of last season’s NCAA athletes would be selected in the draft. The ISL is referring to this as a “cooling off” period.

Hoffer told SwimSwam on Thursday that he’s still deciding what to do but hopes to make a decision soon.

If he does compete, Hoffer is likely to be one of the first few athletes chosen in the “open” draft period, given his versatility and incredible underwater abilities – which play well in the short course pool of the ISL.

Others who fall into that category, but who haven’t publicly declared their intent for next season, include his college teammate Trenton Julian.

Did anyone get how one “registers on the ISL online platform”? As part of the Draft rules, it says that this is a requirement in order to be eligible to vote for an additional swimmer to remain on one’s favorite team.

Am I the only one shocked that Koseki is actually registered and not retiring after what he said earlier????

First guess is Thomas cceon is going first overall. He’s young, Italian and does backstroke which the centurions need. Would be a snag

Where is Hugo Gonzalez?

He still has a season of collegiate eligibility remaining.

That’s going to be super awkward when he doesn’t get drafted.

(He shouldn’t get drafted, but I’m sure the league will force someone to pick him up).

So sad of the possible retirement of Belmonte and Pellegrini.

10: Katie Ledecky
9: Jack Conger, Gunner Bentz, and Jimmy Feigen just wanting to take a piss and go home but somehow got caught up in this
8: Four Texas divers that all score big points
7: Simone Manuel
6: Michael Phelps and Ian Thorpe as one person
5: Dean Farris
4: Rowdy Gaines wearing horse blinders so he can’t see anybody
3: Sun Yang’s smashed blood sample that has since been brought to life in a Chinese lab
2: Paul Biedermann’s Arena X-Glide
1: Eddie Reese (this is why he stepped down at Texas)