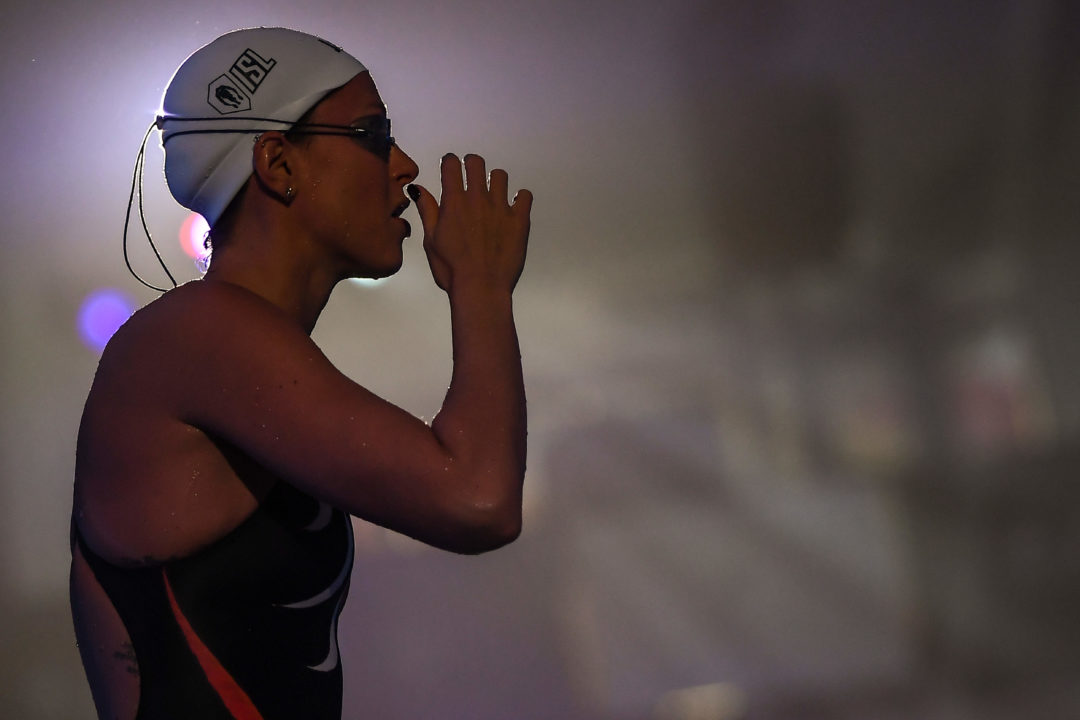 Federica Pellegrini, captain of the ISL's Aqua Centurions and the two-time defending World Champion in the 200 free, has COVID-19. Archive photo via Gian Mattia D'Alberto/LaPresse

Posting on her Instagram story on Thursday, Pellegrini told her 1.2 million+ followers that she had begun to show symptoms of the coronavirus, and after taking a test, found out that she had coronavirus.

“Sorry for my face, but I have some bad news,” Pellegrini said in tears.

Pellegrini explains in the video that on Wednesday, during a training session in the pool, she started having a lot of pain. In the afternoon, her throat began to hurt, and a swab was performed.

Later that day, she received the news that she had tested positive for the coronavirus.

“I’m very sorry because I would have had to leave to join my team in Budapest to compete in the ISL,” Pellegrini said.

Pellegrini was still at home training in Verona, Italy, and had not yet departed for the Budapest “bubble” to participate in the ISL. She is the team captain of Aqua Centurions, who are scheduled to begin racing on Sunday.

Pellegrini is training partners with Stefania Pirozzi, who last week also tested positive for coronavirus in the tests conducted before she departed for Budapest. Pirozzi, unlike Pellegrini, says that she has been ‘totally asymptomatic.’

At the Federal Training Center, the pair train together under Matteo Giunta. Giunta is the head coach of Aqua Centurions and traveled to the bubble in Budapest last week.

So far, 4 athletes have announced positive tests for coronavirus before participating in the ISL. In addition to Pellegrini and Pirozzi, Dutch star Femke Heemskerk and Hungarian World Record holder Kristof Milak also tested positive. Heemskerk had no symptoms, while Milak suffered fever, weakness, and weight loss.

There have been reports of more positive tests conducted inside the bubble of the ISL, but the league told SwimSwam that it had no information to share on that front.

Pellegrini says that she is now under quarantine for 14 days, and that she does hope to join her team if she is cleared to.

This is another blow to the chances of Aqua Centurions after a winless 2019 season. The club already lost 7 athletes when the Italian military, which many Olympians are a part of, pushed their members to not participate.

Now they also lose the 32-year old Pellegrini, who is the two-time defending World Champion in the 200 free in long course and the current World Record holder as well.

Pellegrini got off to a slow start in last year’s ISL season, but was still slotted as their 2nd-best female swimmer based on the ISL’s new rating system for the 2020 season.

Is there a ISL swimming fantasy league? Hard to pick with all these changes

Well this is turning into quite the mess.

Waiting for Guera and He is Swimming Coach to accuse Pellegrini and Milak of faking covid symptoms and call them Coronabros. Since the first meet was supposed to be in Budapest, expect Guera to accuse Soros for all of this.

And since they will talk about imaginary Swedish herd immunity, here is an article from the Time published yesterday.
https://time.com/5899432/sweden-coronovirus-disaster/

She not gonna die.