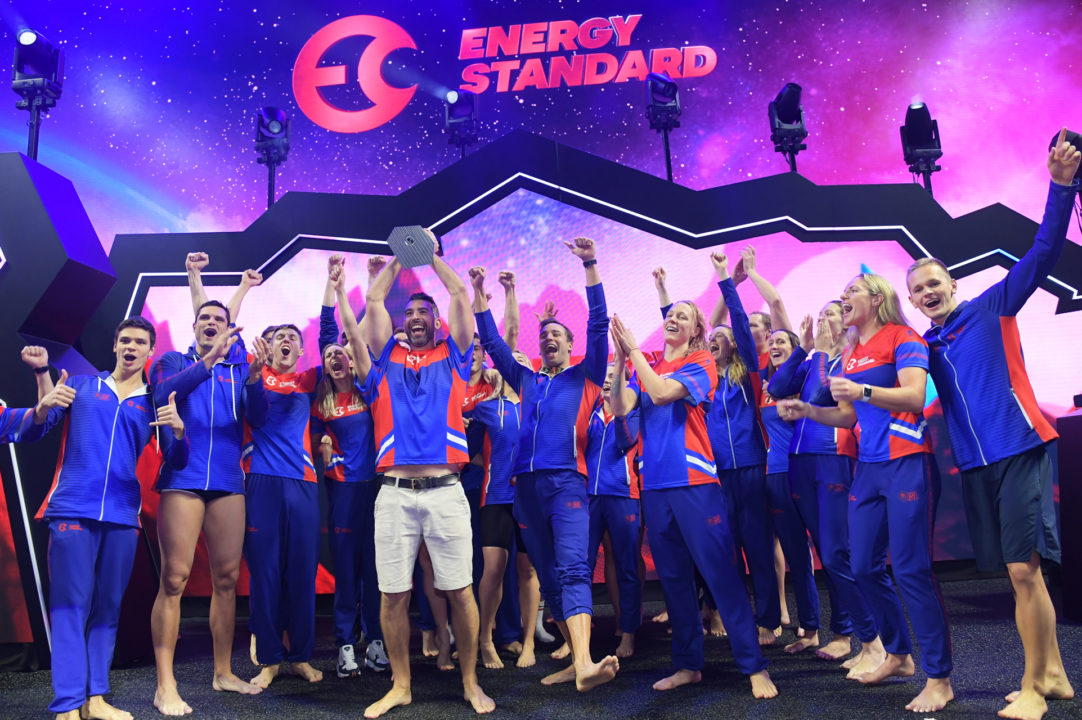 It's time for our first round of International Swimming League power rankings, including the two new 2020 franchises in Tokyo and Toronto. Archive photo via Gian Mattia D'Alberto/LaPresse

It’s time for our first round of ISL Power Ranks in advance of tomorrow’s season opener.

There’s not much to say about the top of the rankings for now. Energy Standard won last year and only appears to have gotten stronger. Interestingly, almost none of Energy Standard’s roster losses will compete against the team this year, as they’ve all bowed out of the league entirely. (Kayla Sanchez, Daiya Seto, Anton Chupkov, Ivan Girev, Penny Oleksiak). The non-free skin races should allow Energy to maximize its incredible backstroke group (Kliment Kolesnikov, Evgeny Rylov, Matt Grevers, Florent Manaudou, Danas Rapsys) across all three distances. Even potentially losing Femke Heemskerk for awhile after a coronavirus test doesn’t really make this team beatable.

The addition of jackpot points probably help Cali more than any other team. Caeleb Dressel should be the jackpot master, with a chance to steal major points from the field, especially if medical protocols start ruling out athletes and thinning everyone’s overall depth. Lilly King has maybe been the underrated ISL star so far, but a handful of 50 breast skin races and she could be among the league’s top scorers.

LA has some of the deepest relays in the league this year, and a repeat finals appearance is a strong possibility. We’re interested to see how Ryan Murphy performs – he has league-winning potential but was up and down last year. Abbey Weitzeil is another key, joining a league that went from brutally deep in the women’s sprint freestyles to actually somewhat thin with the absences of most Australians and American Simone Manuel.

Tokyo’s men’s roster is very strong, even with the late withdrawal of standout Daiya Seto. Sprinter Vladimir Morozov is a potential ISL MVP this season, especially if his move to Tokyo puts him onto a postseason team for the first time. Tokyo will have to deal with a tough split, though – it’s men’s relay depth is outstanding, but the women’s relays face a much tougher battle to score points and avoid being jackpotted.

It’s hard to know just how much to drop this roster based on all the personnel losses from last year. The women’s roster still looks pretty solid, with potential skin winners in back (Kira Toussaint has the second-best career-best time of any 50 backstroker in the ISL this year) and breast (Alia Atkinson is the world record-holder in the 50 breast). The men’s roster still has its standouts, but we might see jackpot steals and cutoff penalties taking a toll on this roster.

Iron also got hit by a tough late withdrawal – Kristof Milak is out while recovering from COVID-19. The Iron roster is still good enough to compete with the #4-7 tier, based in large part on the sprint dominance of Ranomi Kromowidjojo. The men’s roster is sneaky-good in the sprints, too, and Marco Orsi should be a really solid ISL scorer.

We’ll have to see the Titans in action to get a better sense of what this roster can do. One clear disadvantage: skin races, where they’re not going to have a lot of winner contenders, outside of maybe Kylie Masse and Shane Ryan in back. One nice advantage, though, is relays, where Toronto has a really deep pool of 45-46-second splits (Fesikov, Pieroni, Ryan, Chadwick, Kisil). One key will be how well NCAA additions like Louise Hansson, Julie Meynen and Claire Fisch transition to short course meters.

DC is going to be hurting badly in the skins. Ian Finnerty is a bright spot in the 50 breast, but he’s very up-and-down during the season and has plenty of other good sprint breaststrokers to deal with. There’s a lot of potential in the sprints, but it’s hard to tell just how good NCAA addition Ky-Lee Perry or Brazilian standout Matheus Santana will be.

The Breakers have really reworked their roster, and they look considerably better than last season. Jeanette Ottesen could be a difference-maker in the free and fly skin races. New York could quickly move past DC and/or Toronto, but it depends a lot on which teams get stung the most by jackpot steals, and how big an event load Michael Andrew is able to carry without wearing down.

The mass Italian withdrawal brutalized this Aqua Centurions roster, and losing Federica Pellegrini to a coronavirus test is another bad blow. Questionable depth is only going to be exacerbated by jackpot point steals and worries about cutoff times. At the same time, the Aqua Centurions do have some strengths to try to mitigate those struggles. The men’s breaststrokers (Fabio Scozzoli and Nicolo Martinenghi) could rack up some wins and fight for jackpot steals. The men’s free relay should be pretty solid, with a bunch of potential 45/46 splits.

So pumped that the new season is finally here!

Despite the considerable number of swimmers out for corona-related reasons, I am still very excited for the new season!!

Are we going to get a college power rankings soon?

We’re probably going to give it about one more week to shake out who is/isn’t competing and then put something together.

It’s going to be messy, at best.