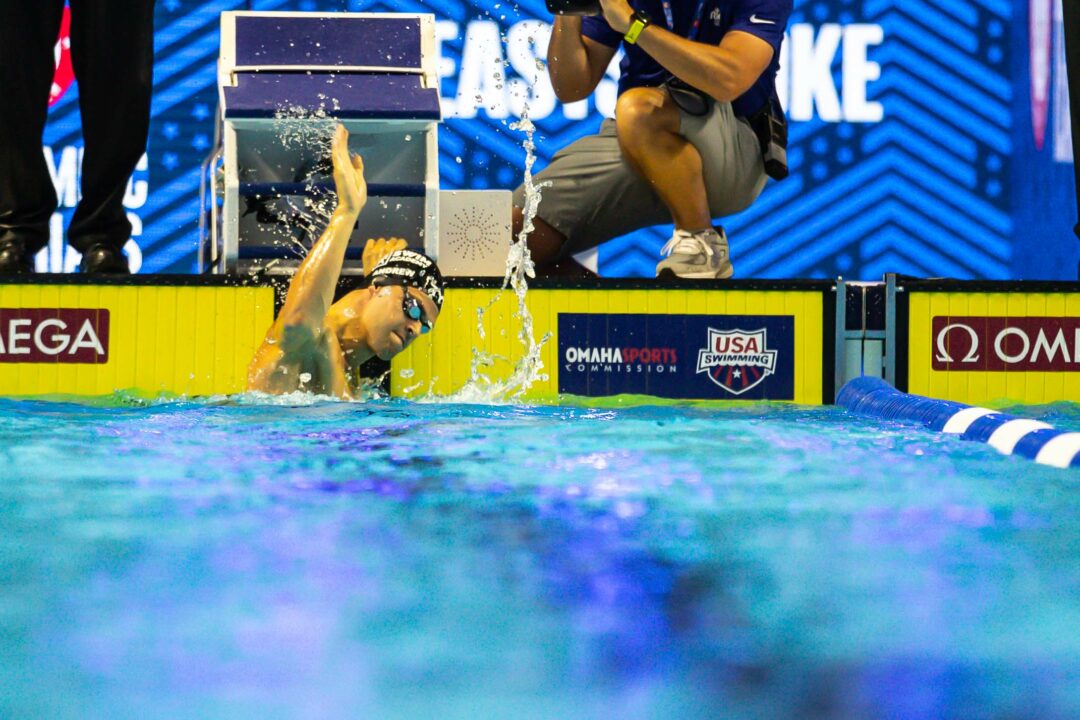 Swimming in the 2nd semifinal heat, Andrew blasted a 58.14, chipping another 0.05 seconds off his morning swim. Current photo via Jack Spitser/Spitser Photography

Michael Andrew has been unbelievable in his first two races at these Olympic Trials, breaking the American Record again in semifinals of the 100 breast tonight. Swimming in the 2nd semifinal heat, Andrew blasted a 58.14, chipping another 0.05 seconds off his morning swim. The 2nd semi heat was incredible, with Nic Fink posting a new personal best of 58.50 to make himself the #2 American all-time in the event.

Andrew was under the American Record in the 50 breaststroke on his first 50 of the race. He touched the halfway mark in 26.83, 0.01 seconds under the U.S. Open Record of 26.84, a record which is held by Andrew, and was his personal best.

The difference between Andrew’s prelims swim and his semifinals swim is that he took the race out more aggressively tonight. In fact, he took the race out so fast, that he swam a lifetime best 50 breaststroke in the process. He came home just a tick slower than this morning, but overall was 0.05 seconds faster.

i watched it… it was streamed on nbc online…
i don’t think nbc felt tv broadcast of a semifinal made sense. Swimming gets no respect

I mean they showed diving instead so let’s calm down.

You’re projecting….all calm on my end..

I tried to watch the rest of swimming on NBC sports app while being logged in with YouTube TV, after MBC switched to diving without any warning, and got “not authorized” access, spent close to an hour with YouTube TV customer service, they are still looking into what caused the issue 🙁

Does this mean he will go for the backstroke tomorrow?

I hope not. He has other events to focus on

This likely bodes well for his 100 fly too, I want to see him go for that

He will do a prelim swim

Cody “I’m in the best shape of my life” Miller… I don’t know why, but I thought he would at least break a minute since he was so confident he was nearing his prime again. I hope he swims well in the 200 at least

Where the MA haters at

We didn’t get to see these semis because, rather than offer universal healthcare, americans need to buy prescription drugs, from watching adverts all day

To piggyback off Braden’s comments on the pre trials podcast, I think the swim boomers would be even more big mad if Andrew goes 48 low and gets on the 400 Free Relay than if he gets a 200 IM WR.

I think by 2024 this dude is on the Olympic team in every 100 as a medal favorite (free-relay only).

Flamin Cheeto Hot Take: I will be surprised if he doesn’t go a 56 by September 2024 in breast.

No I think the 200 IM WR would break SwimSwam. Lochte epitomizes the old school “yardage is key” style of training – if MA were to prove that you can beat that AND break a WR from one of the GOATs with low yardage/high intensity work, I think it’d be awesome

Did we watch the same 400 free final?

48 low won’t get you on the relay or even finals this year.

Soooo where does Fink’s 2nd 50 fall on the all-time list? That was nuts

Fink’s been grinding for so long, and should’ve gotten a world champ medal all the way back in 2013 if it wasn’t for Cordes. I hope he or Wilson get second