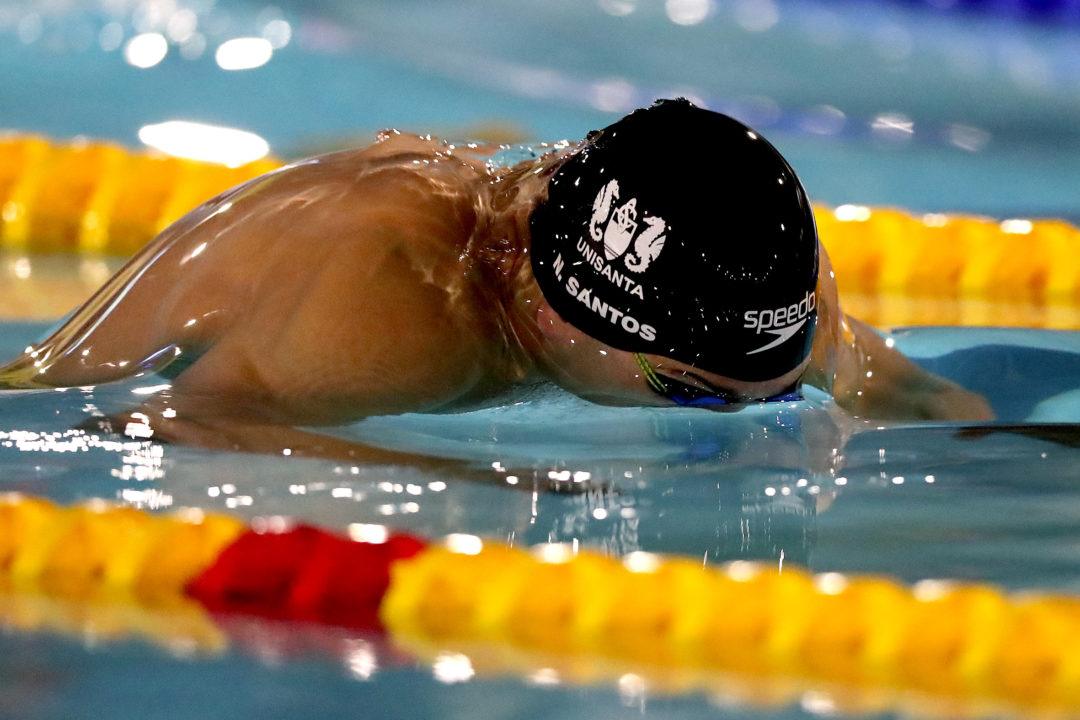 Two world records and a pair of #2 swims of all-time highlighted an incredibly fast final session at the FINA World Cup stop in Budapest. Archive photo via Satiro Sodre/SS Press

The final session of the 2018 FINA World Cup stop in Budapest proved to be the fastest of the meet as records tumbled by the wayside with some incredible performances. The night featured two world records, two #2 swims of all-time, and some near misses on national records.

In terms of world records, we saw 38-year-old Nicholas Santos crack a nine-year-old mark in the men’s 50 fly, as he went 21.75 to get under Steffen Deibler‘s suited 2009 record of 21.80. He joins Deibler, Roland Schoeman and Chad Le Clos as the only men to have ever broken 22 seconds. You can read more about the record here.

Le Clos, who lost to Santos by .01 in Eindhoven, was over three-tenths back for 2nd this time in 22.11, and Japan’s Kosuke Matsui wasn’t too far off the Asian Record for 3rd in 22.62. The race as a whole was a fast one with all eight finalists sub-23.

A few events later we saw another record go by the wayside as Alia Atkinson of Jamaica lowered her own 50 breaststroke record in a time of 28.56, improving her previous mark of 28.64 from 2016. She has now been under 29 seconds on eight separate occasions, a feat only accomplished 14 times in history. You can read more about that record here.

Yuliya Efimova was the runner-up to Atkinson for the second straight night in 29.22, and American Molly Hannis (29.51) and Australian Emily Seebohm (29.96) were also under 30 seconds.

The other two standout swims came early on in the session, as Wang Jianjiahe of China came within a tenth of the 800 free world record in the second event of the night as she blasted a 7:59.44. That shattered her own junior world and Asian Records set in Eindhoven (8:03.86), and narrowly missed Mireia Belmonte‘s world record of 7:59.34. The 16-year-old Wang broke Belmonte’s 400 free record on the opening night of competition.

In the very next race Kelsi Dahlia exploded for a new American and World Cup Record in the women’s 100 fly, recording the 2nd-fastest swim in history with a 54.84. She came back on world record holder Sarah Sjostrom on the second 50 for the win to crush her previous AR of 55.21 set in Eindhoven. She took out Sjostrom’s World Cup Record of 54.91, also set in Eindhoven, and now owns the #2 swim ever behind Sjostrom’s 54.61 done in 2014.

Just one gold medal for Sarah Sjostrom and where … in 200 free. Unbelievable. If she isn’t unhealthy at this meet then it is a lack of concentration in the situation of raising level of competition. This meet is definitely different from Kazan/Doha.
Money talks.

I don’t think Sarah misjudged her shape/concentration. She is not tapered for the world cup and probably will do only for Worlds. Kelsi did the second best time ever, and Sarah still did a 54!

This meet was indeed interesting to follow. It wasn’t a meet of a few swimmers who came here just to cash the check. So many results that were not predicted for sure. Even Hosszu in her traditional events in her beloved SCM format in her home pool was strongly contested. I hope that the competition at Asian stops will be of same intensity, but it most likely won’t happen. But if it will then Sarah’s win of the Cup isn’t guaranteed any more should she swim at the same level.

She may haved done an endurance bloc of training between stops whereas the others did speed . So there is the 200.

She said after that Kelsi killed in the underwaters and that she had a lot of work to do… She should study Dressel..

for me, most surprising is Morozov’s 200 free – impressive time

most impressive is Santos – wow

Congratulations to all the swimmers in Budapest – some really fine swimming there! Any videos of these swims coming?