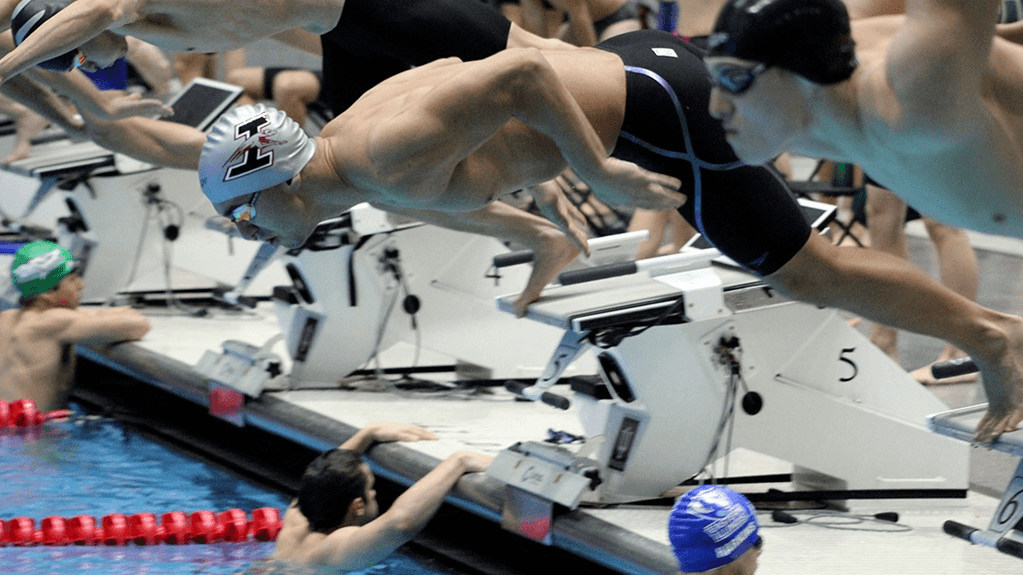 The Greyhound women fell in a valiant effort 142-101, while the men dominated with a score of 143-100. Current photo via Indianapolis Athletics

INDIANAPOLIS – IUPUI swimming and diving kicked off the season with 11 event wins in its dual meet with the University of Indianapolis on Thursday (Oct. 4) night. The women’s team beat UIndy 142-101, while the men lost 138-105.

The night began strong for the Jags with the team of Mallory Buha, Aubrey Wing, Maggie Hatfield and Andrea Hanas winning the 400 Yard Medley Relay with a time of 3:54.03. IUPIU’s next win came from Meagan Ronci in the 200 Yard Freestyle, clocking a time of 1:55.36. Tori Kroon kept the momentum going for the women with a win in the 50 Yard Free at 24.05.

The men’s team got its first win of the night with Jackson Sandala taking the top spot in the 100 Yard Freestyle with a time of 45.56 and Nick Boryk picked up win number two for the men with a victory in the 200 Yard Backstroke in a time of 1:53.81

The last win in the pool for the Jags came in the second to last event of the night as IUPUI won the women’s 200 Yard Freestyle Relay with the team of Hatfield, Hanas, Ronci and Kroon finishing .03 seconds ahead of second place with a time of 1:36.75.

The Jags will be back in action on Friday, Oct. 19 taking on Cincinnati in the Natatorium. The meet against the Bearcats will begin at 6 p.m.

INDIANAPOLIS – After 201 days since last year’s exhilarating NCAA Swimming & Diving Championships, the Greyhounds have a plethora of reasons to be excited for this season. The UIndy swimming & diving teams showed these reasons with an emphatic showing Thursday night, kicking off with a dual-meet against their downtown Division I rivals, IUPUI. The Greyhound women fell in a valiant effort 142-101, while the men dominated with a score of 143-100.

“It was a good and solid beginning to the year,” said fourth-year head coach Jason Hite. “We got a win on the men’s side, and although we didn’t quite pull it out on the women’s side, we had some great races and some good competition from IUPUI.”

Overall, the Greyhounds won a combined total of 15 events out of the 26 available (nine for the men, six for the women). Victor Antonon, Rodrigo Codo Berti, Laura Boardman, Krystal Caylor, Adam Rosipal, and Guilherme Zavaneli each won multiple events on the day.

The men kicked off their first race in a thrilling 1-2 finish in the 400 Medley Relay, as Berti, Jan Zuchowicz, Ante Lucev, and Antonon clocked at a 3:23.68. The B-relay of Daniel Bouhlel, TJ Leseure, Antonio Milin, and Vitor Botana finished for second at a 3:27.49.

The Greyhound women, led by sophomore duo Caylor and Boardman, started collecting wins early as well. Boardman jumped ahead in the 1000 Free, touching first with a time of 10:27.59. She later won the 500 Free on a solid 5:08.81 swim. Caylor collected her first win on the new season in the 200 IM, where she placed a 2:08.72 time on the Natatorium scoreboard. Shortly after, she stepped up in the 100 Free to steal the show on a :52.14 swim.

Payton Staman and Josh Zylstra led the way for UIndy’s diving squad, showing that they are ready for a third consecutive All-American season. Staman placed second overall in a field of nine on the 1-meter, totaling 290.7 points. Zylstra was right behind him in the third spot, as he racked up a grand total of 286.88 points.

With 15 different victors, both the men & the women showed reason to shine. Below is a complete list of all the winners:

“We’re looking forward to racing Cincinnati tomorrow and having more of an away-meet feel to it. It was a good start to the year, and we’re looking for more good things to come,” says coach Hite.

The Greyhounds will look for another win on the season against the Bearcats on Friday, Oct. 5.