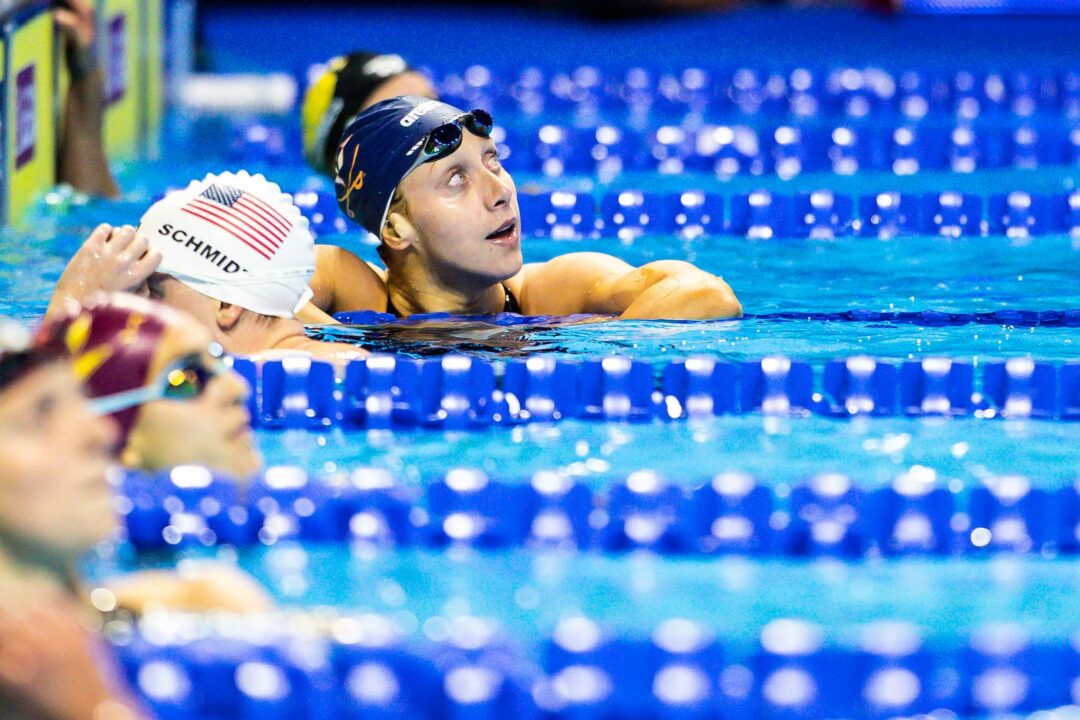 The runner-up spot goes to Paige Madden who took a full second off her personal best of 4:05.92 in 4:04.86 to etch her name onto her first Olympic team Current photo via Jack Spitser/Spitser Photography

She certainly wasn’t thrilled with the time, but Katie Ledecky successfully qualifies for her third U.S. Olympic team as she wins the women’s 400 freestyle by well over three seconds in 4:01.27.

Ledecky, who was two seconds faster than that at the Mission Viejo Pro Swim in April, said she was surprised by the time and thought she had gone significantly faster. Nonetheless, she qualifies for Tokyo, but will have her work cut out for her after Australian Ariarne Titmus blasted a 3:56.90 at the Australian Trials on the weekend.

The runner-up spot goes to Paige Madden, a three-time individual NCAA champion this past season at the University of Virginia, who took a full second off her personal best of 4:05.92 in 4:04.86 to likely etch her name onto her first Olympic team.

Do we know then if Trenton Julian also got Covid? Will this affect his 200 fly?

Yes he did. Amazing that both of them are able to perform at this level after missing two weeks of pretty essential training.

Who is this “Paiger Madden” 😀 All jokes aside just pointing it out so it’s corrected!

Amazing racer. I didn’t know that she got COVID after NCAAs, what a story. Total credit to you Paige. SS, thank you as always.

Not sure I would agree. UVA, NC STATE, GEORGIA, LOUISVILLE, CAL, TEXAS, TX A &M are rockin’. Might be that many college swimmers are repping their club teams.

I’ll point out that everyone always seems to think that if one swimmer from a team is “on,” then they all will be. Some have noted how the Gator women have not excelled compared to the men. Georgia has had some good and some bad. King and Lazor for IU seem dialed in whereas Miller is off. It’s a crapshoot and, unfortunately, not every swimmer from a team will hit their taper right at the same time.

In conclusion, taper is still the biggest mystery known to swimkind.