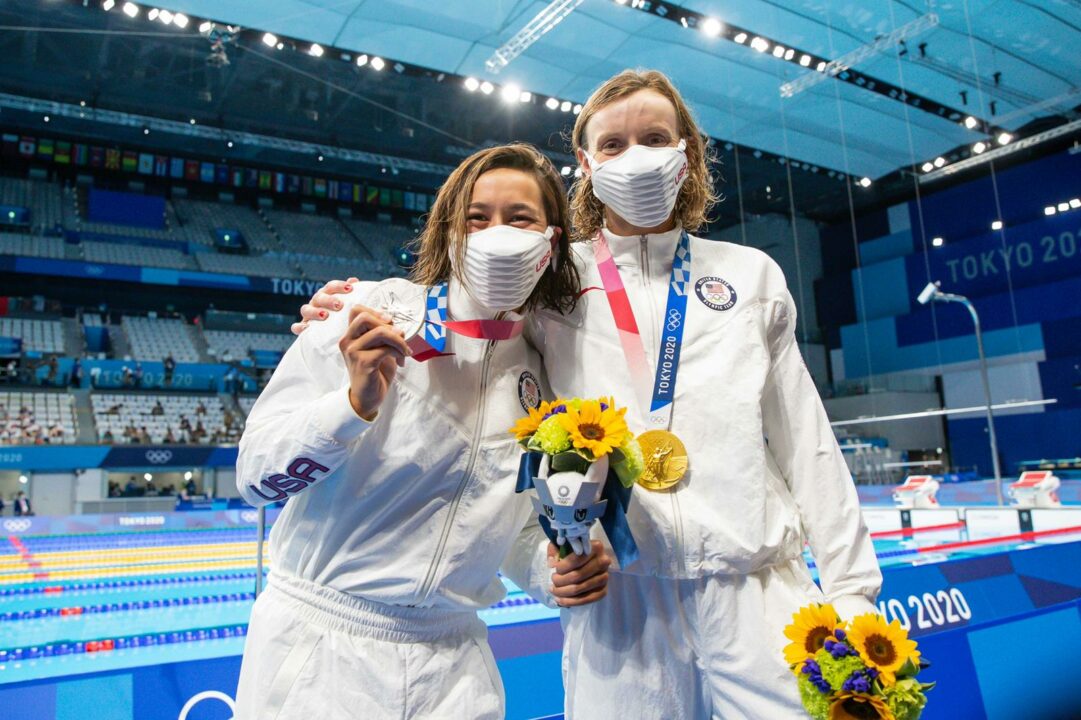 The Olympics have officially seen their first podium in the women’s 1500 freestyle, with American Katie Ledecky un-surprisingly on top. Current photo via Jack Spitser/Spitser Photography

In a less-likely turn of events, Ledecky’s American teammate Erica Sullivan ran down the field to touch second in her first Olympic Games. Sullivan, only 20-years-old, obliterated her personal best of 15:46.67 that she set in the prelims to finish in a time of 15:41.41.

Behind Sullivan, German Sarah Kohler also set a personal best and German National record to win the bronze medal in a time of 15:42.91.

With their performances, Sullivan and Kohler move up to 5th and 7th on the all-time performers list, respectively.

The podium marks the first-ever Olympic podium in the event, which was just introduced into the Olympic line-up.

Ledecky, the world record holder, took out the race fast, splitting 4:06.98 over the first 400 meters. However, she was never alone as China’s Jianjiahe Wang, Italy’s Simona Quadarella, and Germany’s Kohler were nipping right at her heels.

Gradually, Ledecky pulled away from the field, giving herself a 3.5 second lead. At the same time, Wang, Quadarella, and Kohler were all locked in a tight battle for second. Then, around the 1000m mark, Sullivan began to creep up on the field as Wang and Quadarella fell-off the pace. Overtaking them, Sullivan found herself in a race for silver with Kohler.

When all was said-and-done, Ledecky charged into the wall to win her first gold medal of these Olympic Games in a time of 15:37.34. Sullivan managed to hold off Kohler for second, earning her first medal from an major international competition in the process.

Katie Ledecky is a leader and an inspiration!

you changed your name yet again before the medley relay has even been swum. you havent learnt? your previous fantasy wr team is not to be, so why change it again when the wr isn’t guaranteed? and you do realise that you’ll have to change it back to the actual wr if they don’t break it, right?

Ledecky will lose the 800 to titmus

Ledecky was not at her best at trials and still went about a second faster than Titmas did at her trials and It was Titmas best time I believe 800 is def a different race than the 400.

Everybody but Sullivan were noticeably slower in this final race than they were in preliminary race. Isn’t it strange?

You misunderstood me. I’m not questioning Sullivan’s rapid and impressive improvement during last several months. I am wondering why every finalist was much slower their times shown in preliminary race or even than in-season times.

It ain’t like the good old days when the top swimmers could hold back a bit in the 1500 prelims.

Better German than Russian, I say.

You are right. I missed it.

Your world has crashed and burned!

Meanwhile, Russia has yet to medal in a women’s swimming event.

She sat out two years of college for this chance. And she delivered.

Her dad would be so proud.

The Sandpipers of Nevada have delivered one silver medal. Erica Sullivan’s performance should inspire Katie Grimes in the women’s 800 meter freestyle. You gotta believe!

Sullivan outpaced Ledecky after 1100m mark with the exception of last 100m. There Ledecky was significantly faster anybody else in final. Good sign for Katie.

Will be next Olympic record holder in the 1500FR event older than 24? Is her achievement comparable with the Anthony Ervin’s Olympic gold medal in spring at the age of 36?
When I saw her completely unexpected overwhelmed emotions after finish I felt very strongly for her. She isn’t a freak of the nature but the exceptionally gifted person who with the hard work has been bringing her talent to the perfection for 9 years already and as any human has her difficult moments.

The Australian media wrote articles. Go to those websites troll.

There is also an article already written about it haha

Nope. Up to now there isn’t any

I thought Katie looked a bit tired in the race, too, which shouldn’t be surprising. She did exactly what she needed to do to get the victory. Sullivan was simply superb.

I predict that will be the last time Katie Ledecky swims the women’s 200 meter freestyle at a major international competition. Katie Ledecky will primarily focus on the following events in the future:

The double was gutsy and no one deserves victory more, but I wish she had dropped the 200 to preserve energy. It makes the 800 a more difficult task and it will be very close. Titmus is on a high and I think she will be about 3 seconds faster than her trials swim.