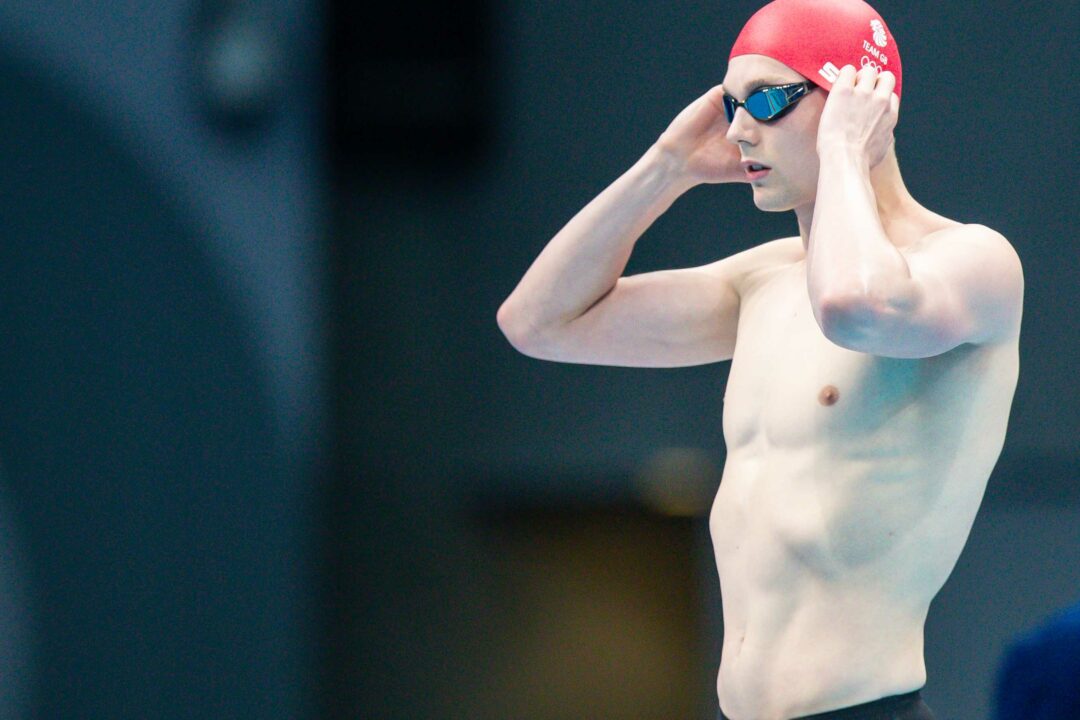 The men's 4x200m freestyle relay broke new ground on a number of historic fronts, as Great Britain took home the gold in a near-world record mark of 6:58.58. Current photo via Jack Spitser/Spitser Photography

The men’s 4x200m freestyle relay final here in Tokyo broke new ground on a number of historic fronts, as the nation of Great Britain took home the gold in a near-world record mark of 6:58.58.

The combination of Tom Dean, James Guy, Matt Richards and Duncan Scott powered their way to the wall first to beat out runners-up Russian Olympic Committee (ROC) and the Australians who took silver and bronze in time s of 7:01.81 and 7:01.84, respectively.

The Britons’ collective 6:58.58 time here in Tokyoultimately fell only .03 shy of the current WR standard of 6:58.55, a result USA put on the books at the supersuited 2009 World Championships.

Here in Tokyo, the newly-minted individual 200m free gold medalist Dean led-off in a solid 1:45.72 with all of the splits as follows for the winners:

Of note, Richards dropped out of the men’s individual 100m freestyle event heats last night in order to preserve energy for this relay and it appears that was the correct decision for what it took to put up this kind of team time.

Going back to Scott, his scorcher of an anchor not only further distanced GBR from the field to sure gold by over 3 seconds, but his final leg now registers as the 5th fastest relay split in history.

For comparison, the existing world record splits include:

In terms of history, Great Britain took silver in this event at the 2016 Olympic Games in Rio and followed that up with gold at the 2017 FINA World Championships, so they had the resume credentials to make a run at the gold and WR.

However, it has not been since 1908 that an Olympic gold was brought home to GBR in this men’s 800m free relay, so these men accomplished knocking down an over-century-old barrier. On the other side of the spectrum, the United States has never gone medal-less in this men’s 4×2 at an Olympic Games, save for the 1980 boycotted Games in Moscow, Russia.

En route to grabbing gold here, the British foursome brought down their own national record in a big way, hacking more than 3 seconds off of the 7:01.70 they put on the books in Budapest. The squad there at those World Championships looked halfway different, with only Scott and Guy carrying over.

The Dean/Guy/Richards/Scott combination also overwrote the European Record of 6:59.15 Russia logged at the supersuited 2009 World Championships when they placed 2nd behind the aforementioned Phelps-led American squad.

Splits for the previous Europan Record included the following:

You have to feel sorry for Scott. Take nothing away from Tom Dean as he got his hand on the wall first when it really mattered but I think Scott is the best 200m freestyler in the world right now..

I just wonder what Scott would have delivered had he been in Deans lane. Take nothing from Dean or Scheffer, but boy did the South Korean do them a huge favour. Both approx 1sec faster when next to him compared to the average of their other three swims. Shades of Chalmers + Timmers 2016. I hope Scott takes 200IM but can see the fatigue getting to him by the final a la 2019 =(

Agonisingly close to the WR for GB.

Tom Dean shouldn’t get too down on his leg. After all, that WR would be at least a second quicker if the GOAT himself swam the sort of lead off that he was capable of.

Congratulations to GBR on a superb relay performance. It’s a pity that tech suit WR wasn’t broken. Tom Dean swam quite a bit slower than expected. He’ll be kicking himself. A few of the Russian and Australian men selected for this relay have been struggling but the teams they put up for the final were pretty decent. What can you say about the USA? Zach Apple looked absolutely shattered after his disastrous leg. You don’t want to see anyone so disappointed at the Olympics. His leg will be talked about in the same way that many still talk about Ian Crocker’s horror leg in the 4X100FS in Athens.

he was actually not. all his mates were saying they were gutted to miss that WR, while Dean did not mention a word abt WR but only said GBR was gonna get the Gold having world no1 me and no2 Scott on team.

Nah, the RTs on the website are inaccurate. Have a look at the PDF instead.

All the 4th swimmer reaction times were huge (0.6-0.8 seconds), can we really trust the timing system in Tokyo???

Agonizingly close to shattering the supersuited WR too😩

When was the last time a British swimmer won two golds at the Olympics?

Duncan scott is about to win 3 or more

5 200m freestyles in 4 days, you can’t really blame him, GB should’ve rested him in the heats and put one of the litchfields in.