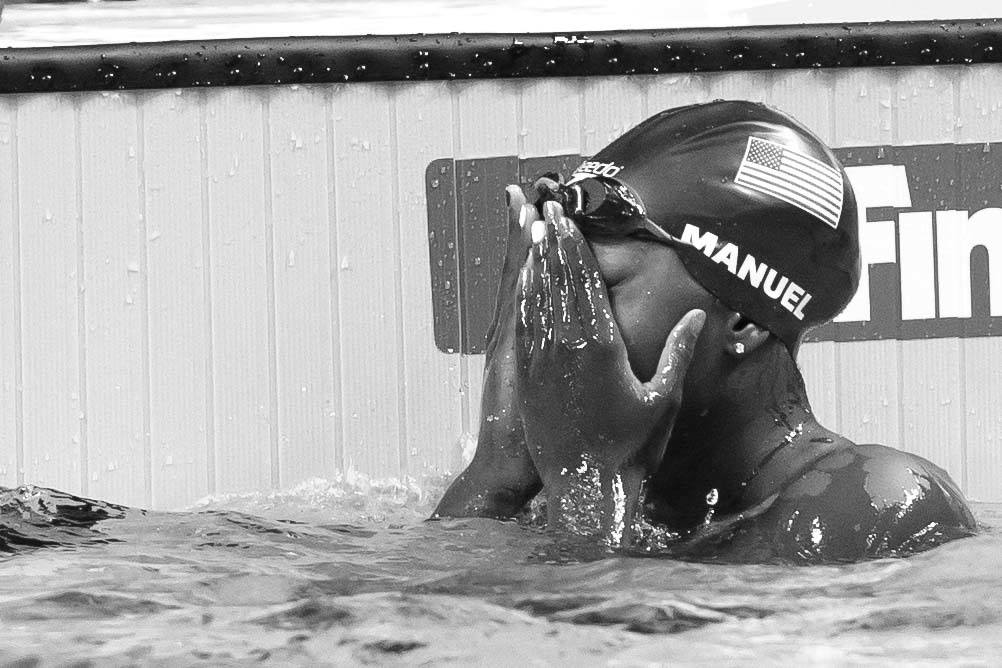 Just as always, the 100 and 200 freestyles at U.S. Nationals will carry a bit of extra weight with the top-4 finishers automatically booking their ticket to the Pan Pacific Championships in Tokyo. This is of vital importance, as if a swimmer can get their qualifying spot out of the way early (the 100 free is on day 1, the 200 on day 2), the pressure is off for the rest of the meet and they can look forward to what events they’ll be swimming at Pan Pacs.

In the women’s 100m event, there is an absolutely stacked lineup of contenders looking for a spot in the top-4 and on the 400 free relay at Pan Pacs, and there are only two swimmers who look like locks to qualify without being 100% rested. Those two are Simone Manuel and Mallory Comerford, who both broke the American Record in the event last year.

Comerford was coming off a breakout college season where she tied Katie Ledecky for the national title in the 200 free, and surprised almost everyone when she dropped over a second to beat Manuel head-to-head at World Trials in a time of 52.81. At the World Championships, she broke Manuel’s AR of 52.70 leading off the victorious 400 free relay in 52.59, and went onto finish 4th individually in her first major international LC competition.

Manuel, who tied Canadian Penny Oleksiak for Olympic gold the year prior, knew she didn’t need to fully taper to qualify for Budapest, and easily finished as the runner-up to Comerford in a time of 53.05. However, once she got to Worlds, she laid down the hammer, splittings 52.1 on three separate occasions in relays while running down world record holder Sarah Sjostrom to win her first individual World title in a new American Record of 52.27.

This year, the two of them remain atop the heap. Who will win in Irvine is essentially a coin flip and irrelevant. As long as they don’t underestimate the rest of the field, they’ll have no problem going 1-2, in any order, and securing a spot at Pan Pacs. Behind them is where things get messy.

Last summer there were four women vying for the two remaining relay spots in Budapest. Lia Neal and Kelsi Dahlia were the only other two who got under 54 seconds in 2017, while the 5th and 6th fastest swimmers Olivia Smoliga and Katie Ledecky both turned in 53-point relay splits at Worlds. Neal would have to be considered the front-runner out of the four this year, swimming the three fastest in-season times of her life in 2018 (including a 53.95 in Santa Clara), but all of them will be in the running in Irvine. Dahlia and Smoliga have both been somewhat underwhelming so far this year, yet to crack 55, but neither is known to be particularly fast in-season in this event.

There’s also the chance Dahlia doesn’t swim this, with the 200 fly coming on the same day at Nationals. That would be a much better chance for her to solidify her name on the roster early (even though she’s a lock to win the 100 fly), and she could still make a case for herself to be on the 400 free relay at Pan Pacs by swimming the individual 100 there (as it comes before the relay).

For Ledecky, she won’t need anything close to a full taper to qualify for Pan Pacs in the longer events, so it’s tough to know where she’ll slot in. She was only 7th in Omaha and 6th in Indianapolis, but found herself in the final of the 400 free relay at the Olympics and World Championships. A similar scenario could play out here.

There are quite a few names legitimately in contention for a spot in the top-4 this year that were nowhere to be found in 2017.

Just as was outlined in the women’s 50 free preview, 26-year-old Margo Geer has had an amazing comeback year in 2018. She was 15th in this event at the 2016 Olympic Trials, didn’t compete at last summer’s World Trials, but is now the fastest American this year. Swimming a pair of 53.7s at the Austin Pro Swim in January, the two fastest performances of her life, she has continued to be fast through the season with six additional swims under 54.5. The consistency indicates she should be favored to place in the top-4.

Two more swimmers in contention who weren’t even competing last summer in Indianapolis are veteran Allison Schmitt and youngster Erika Brown, who sit 5th and 7th respectively in the nation this season.

Schmitt, an eight-time Olympic medalist, never said the word “retirement” after the Rio Games, but did take some time off. Last September a string of social media posts revealed it was likely she was going to pursue a comeback, and that came to fruition this year as she appeared at three of the Pro Series stops in Mesa, Indianapolis and Columbus. Her showing in Columbus in early July was by far her best, including a 54.34 100 free which put her 5th in the country as is right on par with her in-season swims in 2016 before she went a PB at the Olympic Trials.

Brown, a rising junior at Tennessee, has followed up her breakout NCAA campaign with some very impressive long course swims, including a 54.52 100 free in mid-June which is close to two seconds better than her previous best of 56.24. She’s still a relative unknown, but is clearly on the up and up and could easily jump into the 53s and surprise the more established vets.

The three other Americans who have been under 55 this season are Katie McLaughlin, Veronica Burchill and Gabby Deloof.

McLaughlin has seen vast improvements in her sprints this year, swimming the five fastest times of her career, but has the same scheduling conflict of Dahlia and Jack Conger on day 1 with the 200 fly and 100 free back-to-back. It’s a tricky decision for her, sitting as the 5th fastest American in the 200 fly and 6th in the 100 free. Based on the strength of the field here, I think we’ll ultimately see her in the 200 fly.

Burchill broke out last summer by making the A-final at Trials, and according to her coach at Georgia Jack Bauerle, has been making “quantam leaps” in her training, and he believes the sky’s the limit for her. She swam a lifetime best of 54.80 at the Bulldog Grand Slam in early July, and has also posted PBs in the 50, 200 and 400 this season.

Deloof cracked 55 for the first time in Columbus, and looks to be on her way into 54.5 territory. Right now, 8th in the country is 54.56, and it will probably take somewhere in the 54.3 range to get in the A-final. The recent Michigan grad has a shot to get in, but an outside one.

This field is so stacked we haven’t even touched on Abbey Weitzeil, the 4th fastest American in history. Her best swim in the last two years is the 54.99 she went to place 10th last summer, and just hasn’t been able to put together a great LC 100 since 2016. However, we did see some 46-second yards swim during the college season which was an improvement from her freshman year.

Gretchen Walsh, Isabel Ivey, Claire Rasmusand Amanda Kendall are a few other names to keep in mind heading into the competition.

Darkhorse: Cal’s Amy Bilquist is one to watch out for in this event after she chose it over the 200 back at the 2018 NCAA Championships. She ended up making the championship final with a lifetime best 47.45, and is overdue for a long course best with it currently standing at 54.85 from 2014.

There’s several swimmers who can make top 6. It will be really close in prelims

It is interesting that personal best of Mallory Comerford in 100 free is just 0.3s slower than Simone Manual’s one. She’s beaten Manuel last year in 200y and 100lcm at trials. She made her personal best and American record in the first race of WC and then got four more gold medals in other relays. This relay duty probably affected her individual race. And despite of all off this she is considered to be of second level to Manuel.
The situation can get changed like it’s happened this spring in the case of Campbell sisters.

I think she may be considered second level because Manuel is Olympic and World Champion… At this level, times don’t matter as much as placing and performing at the highest level which Comerford has done but Manuel has perfected.

I find it interesting cause its not true.

USA women’s swimming is so stacked