Anastasia Fesikova Swims 2:09 in 200 Back at Russia Cup 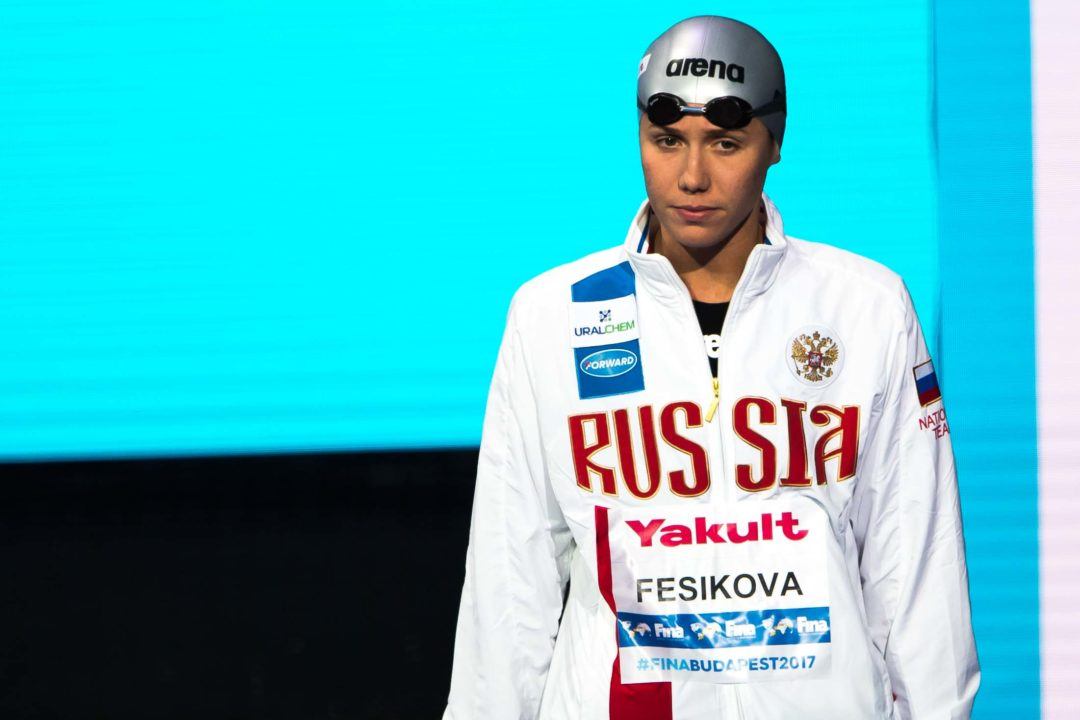 Fesikova didn't swim her best event, the 100 back, using the 200 meter race instead as a 'training distance' as she prepares for the European Championships. Archive photo via Mike Lewis/Ola Vista Photography

A portion of the Russian team for the 2018 European Championships attended the 2018 Russian Swimming Cup last weekend in Obninsk as a final preparation for the upcoming Glasgow event. Among the festivities was an opening-day ceremony to honor the 1968 Olympic Team on its 50-year anniversary. The then-Soviet team tied for the second most medals, with 8, but on traditional sorting of a medals table wound up 7th, as none of their medals were gold. The U.S. dominated that year’s Olympics, winning 52 of a possible 87 medals.

Russian National Team captain Anastasia Fesikova was among the stars of the weekend’s meet. She swam, and won, both the 50 back (27.92) and the 200 back (2:09.08), but didn’t race the 100, where she once held the World Record. That was her first 200 back since 2016, and on her own scale was a very good in-season time. Explaining why she didn’t swim the 100, which at this point of her career is her focus race, Fesikova said she was satisfied with the race-practice she got at the recent Mare Nostrum series.

“Yes, at this meet I decided to try to swim 200 meters, because I swam the 100 six times at the Mare Nostrum,” Feskiova said. Now, being under load, I wanted to try to swim double my primary distance distance. It turned out well…At this stage, the results are very good.

“Summing up the results of this start according to the results that the members of the national team showed, is difficult, because some rested, while someone raced at full load. For us it was a training meet. For athletes who did not qualify for the European Championships, this start was the last major meet of the season, and all were prepared for it after the Russian Championship. We need to practice racing to get in race shape. I would like to see more such competitions.”

Fesikova’s best 100 back of the season came in the Monaco stop of the Mare Nostrum, where she touched in 59.45 in the final for 3rd place. In her absence, Maria Kameneva, who earlier this year set the Russian Record in the 50 free at just 18 years old, won in 1:00.50.

For scoring purposes, regions of the Russian Federation were divided into groups according to their membership in 2018, and points were calculated based on times rather than placement.

Team Scoring among the subjects of the Russian Federation. ( group 1 )

Team Scoring among the subjects of the Russian Federation. ( group 2 )

Team credit among the subjects of the Russian Federation. ( group 3 )

Does anybody know how to load the pdf file with the results of the meet and to see names of swimmers instead of blank spaces?