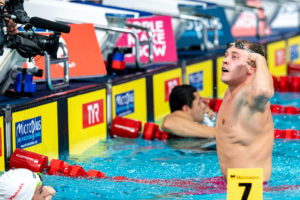 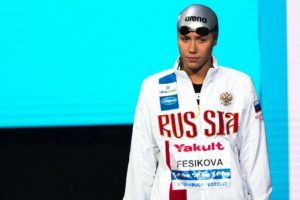 Anastasia Fesikova (above) defended her Russian title in the 50 back, while Oleg Kostin took out the Russian Record in the 50 fly. 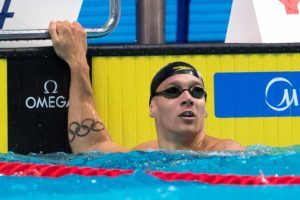 Get hype: Kristof Milak swims the 200 fly, Caeleb Dressel swims the 100 free after going a 47.32 in prelims, and Sun Yang races for his third gold medal. 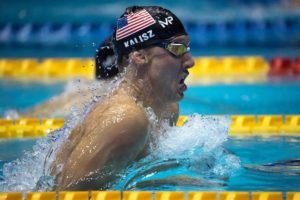 Anastasia Fesikova
Anastasia Fesikova, formerly Zueva, is a multi-time Russian Olympian. Born May 8, 1990 Fesikova won a silver medal in the 200-meter backstroke at the London Olympics. She got married soon after, and took a long break from the sport, giving birth to her first child in 2014. Fesikova made her return at the 2015 World Championships, where she finaled in the 100-meter backstroke. Zueva married fellow Russian swimmer Sergey Fesikova and gave birth to her first child in 2014

Early career
Fesikova has been around the international swimming scene for a decade, making her first appearance at the 2006 European Championships. She qualified for her first World Championships in 2007, where she advanced to the championship final and came in 7th in addition to 5th in the 4×100-meter medley relay. She made big strides in 2008, winning gold in both the 50 and 100-meter backstroke, and silver in the 200-meter back. Over the next few years Fesikova suffered a back injury.

2008 Beijing Olympics
Fesikova qualified for her first Olympic Games in 2008, where she travelled to Beijing to swim the 100-meter backstroke. During the preliminary heats of the 100-meter back, Fesikova set and held the Olympic Record in the event for just one heat.

2012 London Olympics
In 2012 Fesikova qualified for her second Olympic Games, and although she initially focused on the 100-meter back. Fesikova advanced to the championship final in the 200-meter back, and earned her first Olympic medal when she won a silver medal in the event.

In the 50, Fesikova finished 9th in the semi’s, just .10 away from advancing to the championship final. She made her comeback however in the 100-meter back, this time advancing to the championship final. Fesikova took out the first 50 meters relaxed, and when she turned at the 50-meter mark, she took off and had an excellent last 50 meters to finish 6th place in the event.

Fesikova led off Russia’s 4x100m medley relay with a 58.96 to help teammates Yuliya Efimovca, Svetlana Chimrova and Veronika Popova win the silver medal behind the US. The foursome set a new European Record with a time of 3:53.38.