Veronica Burchill: Nationals on the Horizon 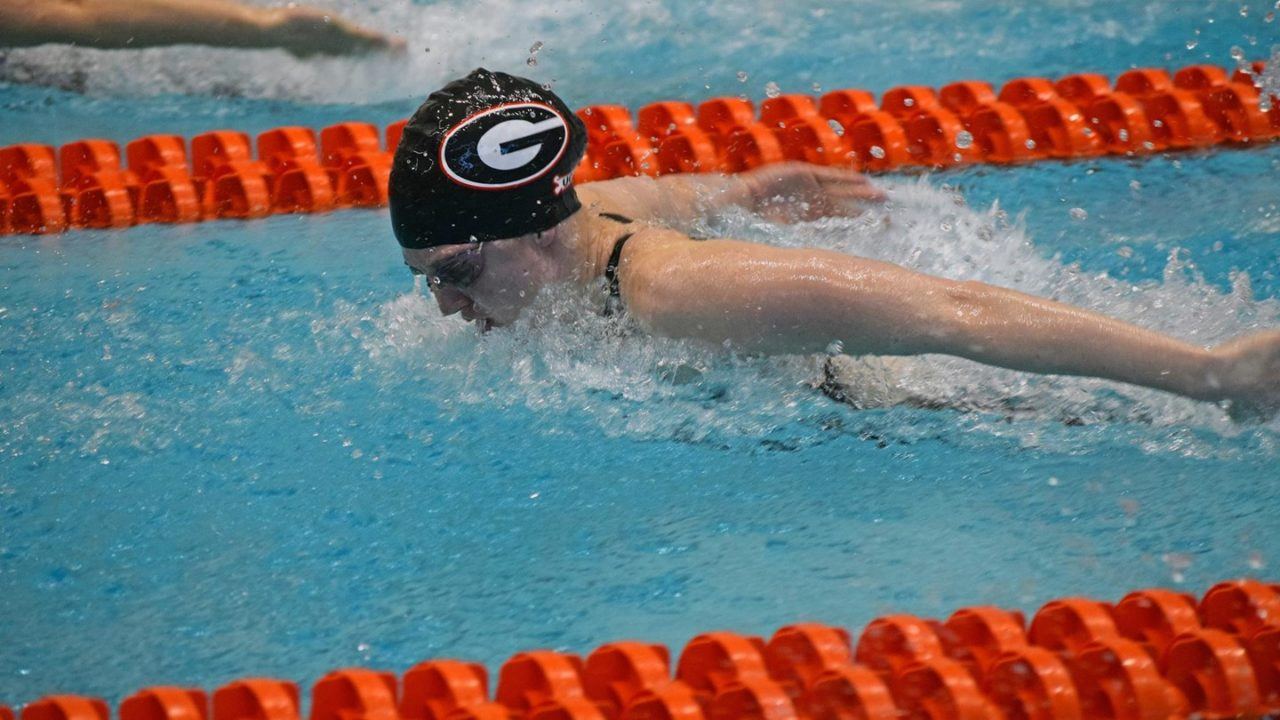 After several promising swims this season, Veronica Burchill is gearing up for US Nationals. Stock photo via UGA Athletics

As the summer sun heats up the Georgia landscape, University of Georgia’s Veronica Burchill is heating up the pool. At the recent Bulldog Grand Slam, Burchill went best times in both the 100 freestyle and the 100 butterfly, having already swum three other unrested lifetime bests this year. Burchill’s swimming has put her in position to be a major contender at US Nationals, where she will be swimming the 50, 100, and 200 freestyle as well as the 50 and 100 butterfly.

Not only has Burchill had encouraging sprint swims lately, but her venture into swimming the 400 freestyle at the 2018 Charlotte UltraSwim yielded a 6 second drop, from a 4:23.88 to a 4:17.49. She said the goal of the swim was just to “have fun and see what she could do”. Burchill honors her high school training with coach Ian Murray, saying, “I’ve always had that [middle distance] background, and I think it’s finally catching up to me and helping my confidence. I’ve really been working on swimming smarter.”

According to Georgia head coach Jack Bauerle, these kind of swims are the results of Burchill’s work ethic and attitude. He credits Burchill’s positivity and determination, “The most important attribute she has is that she comes in very ready every day to get something done.  She doesn’t worry about how much yardage we give her. Whatever’s there she does.”

With the 2018 US Nationals fast approaching, Burchill excitedly recalls making the A final in the 100 freestyle last year. In prelims, despite hitting the lane line with her arm after coming off a turn, Burchill powered through the race and secured the eighth spot for finals, ultimately finishing seventh that night, “I was honestly just shocked…I think the whole experience made me 1) thankful that I didn’t mess up my race and 2) really excited for the future. I think that race really helped me prove myself.”

Coach Bauerle is optimistic about this year’s upcoming Nationals, saying that Burchill has made “quantum leaps” in her training, specifically in her underwater work. He cites her “willingness to work on her weaknesses” and her enjoyment of the sport as some of her greatest strengths as an athlete, “It’s a nice tribute to the program because they certainly don’t get burned out. It’s important that they have an environment that has a bit of fun attached to it. It’s swimming. Have a little fun and see how fast you can get.”

What should we expect to see from Veronica Burchill in the future? Her coach sums it up perfectly, “Her potential?  I think the sky’s the limit.”

She works so hard in the pool! But most of her success comes from outside. She puts in a lot of work in the weight room, dry land, and nutrition! I can’t wait to watch her summer!